Follow
Home » Science » SpaceX confirmed that its Crew Dragon spaceship for NASA was 'destroyed' by a recent test. Here's what we learned about the explosive failure.

SpaceX confirmed that its Crew Dragon spaceship for NASA was 'destroyed' by a recent test. Here's what we learned about the explosive failure.

Nearly two weeks after SpaceX said one of its spaceships suffered a testing “anomaly” — it exploded — an executive of Elon Musk’s aerospace company has provided fresh information and insights into the failure.

On April 20, SpaceX set out to test the escape thrusters of its Crew Dragon capsule, which isdesigned to fly NASA astronauts to and from orbit. The test was supposed to show that the ship’s engine clusters would ignite without incident. SpaceX was then planning to attach the capsule to a rocket in order to test the escape system mid-flight. If all of this had gone smoothly, that would have showed NASA that SpaceX’s launch system is capable of propelling astronauts out of a high-speed pickle if one arises. But that’s not what happened.

“The initial tests completed successfully but the final test resulted in an anomaly on the test stand,” SpaceX said the day of the failure. “Ensuring that our systems meet rigorous safety standards and detecting anomalies like this prior to flight are the main reasons why we test. Our teams are investigating and working closely with our NASA partners.”

SpaceX, which is typically forthcoming after its failures, has been unusually quiet about this one. Even Musk has yet to make a public statement on the matter.

On Thursday, however, Hans Koenigsmann — SpaceX’s vice president for mission assurance — revealed new details about the explosion during a press conference. (The event was supposed to focus on the company’s upcoming cargo resupply mission to the International Space Station, which is scheduled to launch 3:11 a.m. EDT on Friday.)

Here’s what we’ve learned from Koenigsmann — and other reporting — about the Crew Dragon’s testing failure.

1. The ship’s small escape thrusters fired ok, but something bad happened before its larger engines ignited 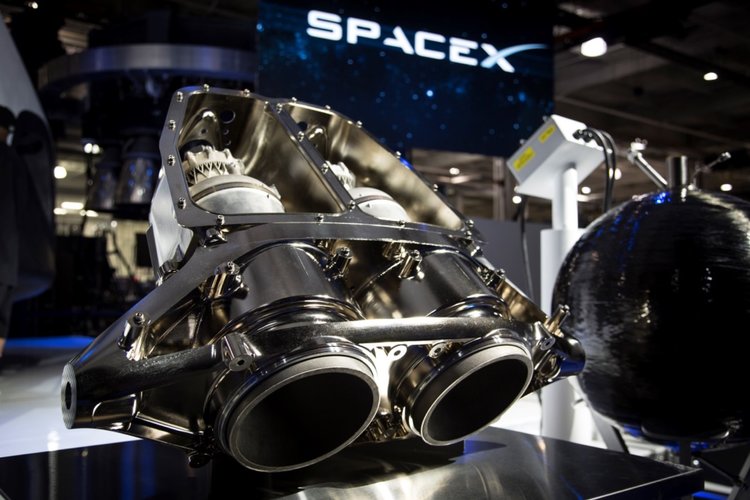 Koenigsmann said the Crew Dragon was attached to a stand in Cape Canaveral, where SpaceX typically lands its Falcon 9 rocket boosters for later reuse.

“Because this was a ground test, we have a high amount — a huge amount of data — from the vehicle and the ground sensors,” Koenigsmann said. “The initial data indicates that the anomaly occurred during the activation of the Super Draco system.”

By “activation,” Koenigsmann clarified: “You pressurize the system, make sure everything is primed in. You open valves, you close valves.”

“The vehicle was destroyed,” Koenigsmann said. But he noted that key parts survived the blast, including pressurized tanks the engines require, called composite overwrapped pressure vessel (or COPVs). That may help SpaceX whittle down the list of potential causes of the explosion.

Koenigsmann speculated that neither the Super Draco engines nor COPVs are to blame, given hundreds of prior tests during which they’ve worked just fine.

“We don’t have, currently, something where we could say, ‘Oh, it was most likely this or that.’ We do think — I think — it was not a Super Draco thruster itself,” he said. “But that’s pretty much all I can say at this time. It will take some time for us to go through the data and figure out what it was.”

3. SpaceX is cagey about it, but this video is almost certainly authentic

A journalist asked Koenigsmann whether or nota viral video purporting to show the Crew Dragon exploding was authentic. The VP said he couldn’t comment on it since the clip “was not produced by us.”

However, the Orlando Sentinel reported on Tuesday that it had obtained an internal memo that a NASA contractor emailed to its employees. That memo read:

“As most of you are aware, SpaceX conducted a test fire of their crew capsule abort engines at [Cape Canaveral Air Force Station], and they experienced an anomaly […] Subsequently, video of the failed test — which was not released by SpaceX or NASA — appeared on the internet.”

The Sentinel said the memo “confirms the video is authentic and the capsule did explode.”

4. SpaceX still lacks access to the test stand where its capsule exploded

Although it has been nearly two weeks since the explosion, Koenigsmann says SpaceX has yet to get its own up-close look at the testing stand where it happened.

When pressed on the matter, he seemed to indicate that this delay was for safety reasons, noting that some COPVs are still intact — and under immense pressure. The fact that the engines use a toxic oxidizer called dinitrogen tetroxide might also play a role in the limited site access.

5. A question about saltwater led to an interesting reaction by SpaceX 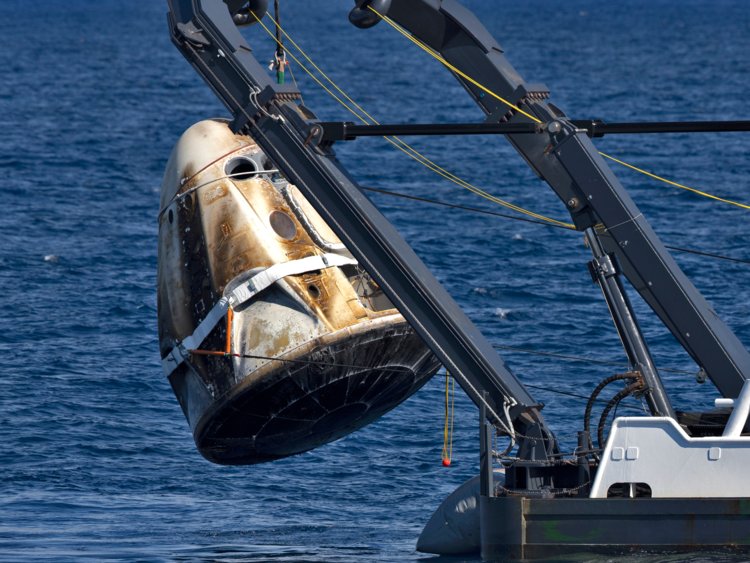 SpaceX’s Crew Dragon is retrieved by the company’s recovery ship, Go Searcher, in the Atlantic Ocean, about 200 miles off the east coast of Florida March 8, 2019, after its return to Earth on the Demo-1 mission.NASA/Cory Huston

The Crew Dragon vehicle that SpaceX was testing has previously been sent into space. When it returned, it splashed into the Atlantic Ocean. Saltwater can harm metal and electronics.

So at the press conference, one reporter asked if any of SpaceX’s hundreds of tests of the Super Draco engines had ever used a system that was first exposed to saltwater.

“That’s a good question,” Koenigsmann said, seeming to pause and think for a moment. He was unable to provide an answer.

But he did note that the Super Draco system was “isolated and never used.”

SpaceX presumably inspected and cleaned all areas of the Crew Dragon where salt water got in prior to the April 20 test. But a spaceflight expert who spoke on the condition of anonymity told Business Insider “that doesn’t eliminate the possibility that [saltwater] was part of the problem.”

6. Two NASA astronauts who are supposed to fly inside the spacecraft called SpaceX after the blast 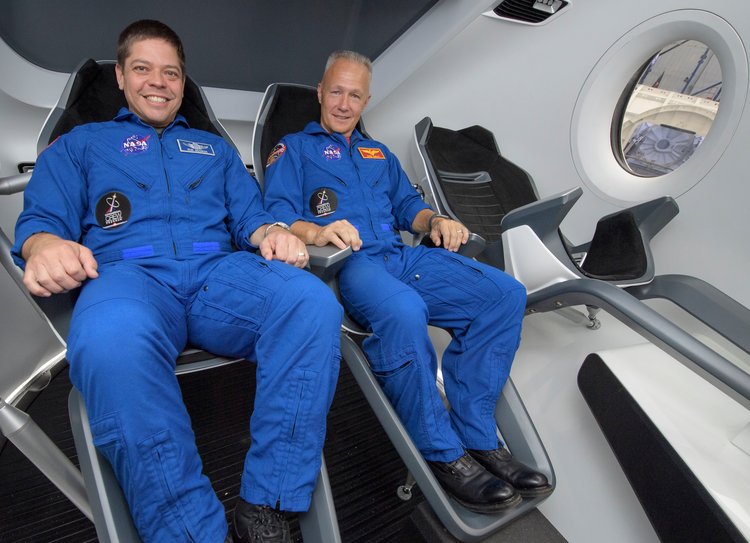 Another reporter asked if anyone at SpaceX had, following the anomaly, spoken NASA astronauts Bob Behnken and Doug Hurley — the two men who are slated to fly Crew Dragon for the first time.

“They were very sympathetic and reached out to us,” he said. “I almost feel like they’re encouraging us right now, and they are helping us in keeping our motivation and not falling into a hole, basically.”

7. Despite the failure, SpaceX is hopeful, given the circumstances

It’s never comforting when a safety test ends in destruction. But Koenigsmann seemed upbeat about the prospects of rooting out the cause and moving forward.

“That is why we test. If this has to happen, I’d rather it happen on the ground in the development program,” he said. “We will take the lessons learned from this, and I’m convinced this will help us to ensure that Crew Dragon is one of the safest human spaceflight vehicles ever built.” 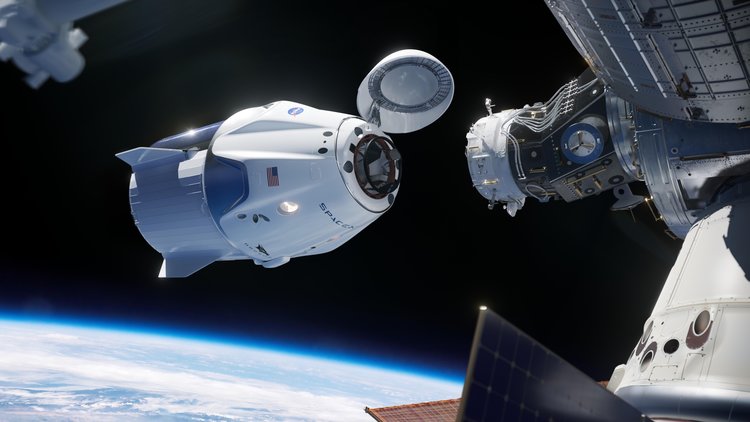 An illustration of SpaceX’s Crew Dragon vehicle, a spaceship designed to fly NASA astronauts, docking with the International Space Station.SpaceX

Prior to the failed test, SpaceX had hoped to launch Behnken and Hurley this summer.

When pressed about schedule changes as a result of the failure, Koenigsmann said he hopes “this is a relatively swift investigation,” but added that he “didn’t want to completely preclude the current schedule.”

Koenigsmann said it’s still too early to tell what the result of the joint NASA-SpaceX investigation will be, given its early stage. The required fix could be a small or big change to the Crew Dragon or the way it’s operated.

In the meantime, Boeing may become the first to fly NASA astronauts as part of the agency’s Commercial Crew Program.