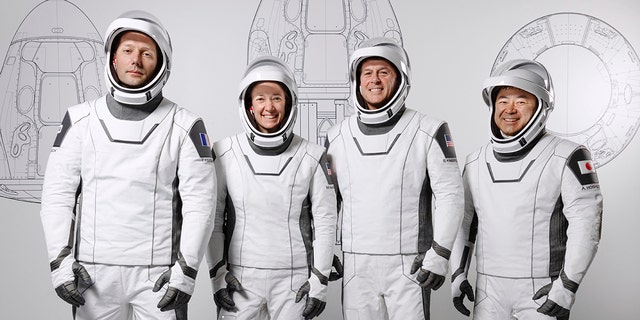 This March 3, 2021 photo made available by SpaceX shows mission specialist Thomas Pesquet of the European Space Agency, pilot Megan McArthur and commander Shane Kimbrough of NASA, and mission specialist Akihiko Hoshide of the Japan Aerospace Exploration Agency, the crew for its third astronaut launch to the International Space Station, at the SpaceX training facility in Hawthorne, Calif. (SpaceX via AP)
(SpaceX via AP)

“Glad to be back in space for all of us,” Kimbrough radioed flight controllers after reaching orbit.

“Predawn launches are always amazing,” Steve Jurczyk, NASA’s acting administrator, said during live coverage of the event. “It was thrilling to see.”

Their stay aboard the ISS is slated to last for six months.

The SpaceX Crew Dragon spacecraft — now traveling at thousands of miles per hour — is expected to dock at the ISS on Saturday at approximately 5:10 a.m. ET.

The flight marks SpaceX’s third crew flight in less than a year, the second crew rotation on a commercial spacecraft mission and the first with two international partner astronauts, as well as the first time SpaceX has reused a capsule and rocket to launch astronauts for NASA.

The rocket was last used in November on SpaceX’s second astronaut flight.

Space.com reported Friday that SpaceX had replaced some valves and thermal shielding and installed new parachutes on the capsule. 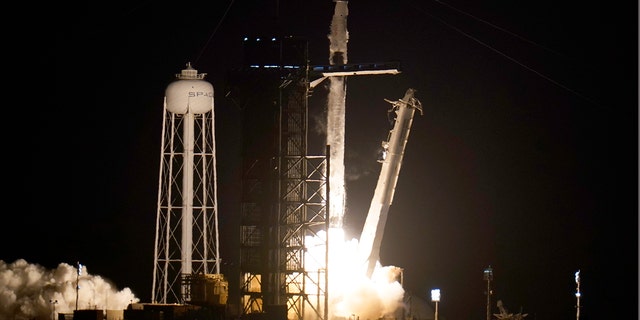 Initially scheduled to lift off on Thursday morning, the flight was delayed by inclement weather.

The Crew-1 team that arrived last November is scheduled to return to Earth on April 28.

Coverage of the crew’s 23-hour ride and docking will continuously air live on NASA Television and the agency’s app and website.