SpaceX launches the first south bound rocket from Florida since 1969

Elon Musk-owned SpaceX has launched the first south bound rocket from Cape Canaveral in Florida for the first time in more than 50 years.

The Falcon 9 rocket was launching an Argentinian SAOCOMB 1B satellite into polar orbit where it will monitor the Earth for signs of impending natural disasters.

To reach polar orbit the rocket had to do a ‘dog leg’ manoeuvres to the east to avoid heavily populated areas while it was climbing to higher altitudes.

Usually polar orbit launches liftoff from Vandenberg Air Force Base in California as they can head out to sea and fly up over the Pacific Ocean – but a spate of wildfires near the launch site prompted SpaceX and the US Air Force to look for alternatives.

The last polar orbit launch from Florida was a weather satellite in 1969 – sent up on behalf of the NOAA forerunner the Environmental Science Services Administration. 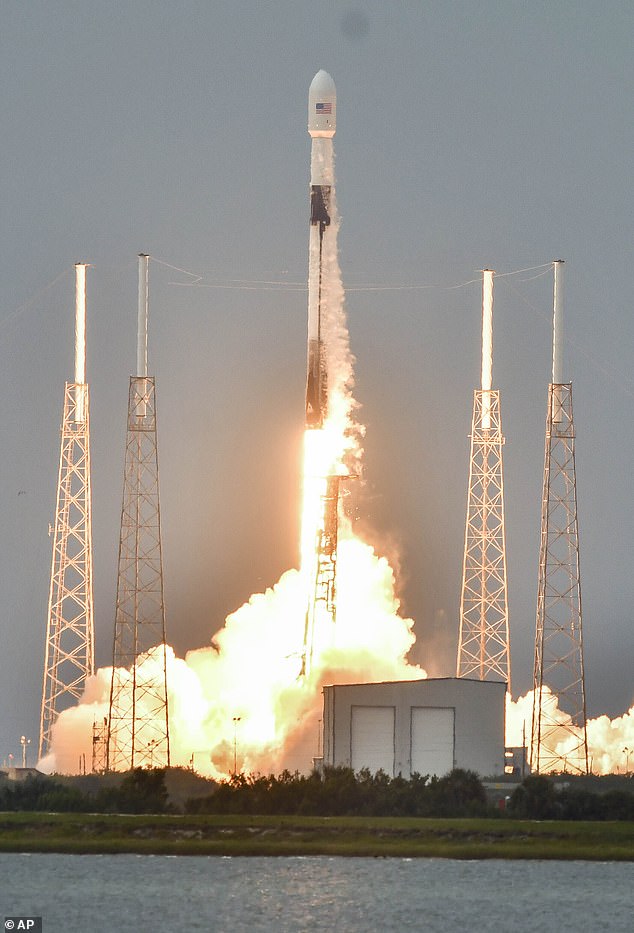 A SpaceX Falcon 9 lifts off from Pad 40 at Cape Canaveral Air Force Station, Florida on Sunday, August 30, 2020. The rocket is carrying the SAOCOM 1B satellite for Argentina

Second man on the Moon, Buzz Aldrin, praised SpaceX for the launch in his backyard

SpaceX was due to launch two rockets on Sunday – one headed for polar orbit and another carrying Starlink satellites that was called off due to bad weather.

To reach polar orbit the Falcon 9 headed south after liftoff at 00:18 BST, then it had to skim along the southeastern Florida coast near Miami before flying over Cuba.

By the time the rocket was flying over Cuba it was at a high enough altitude that it didn’t pose a danger to people, according to a spokesperson.

The booster from the Falcon 9 launch touched down safely after a pintpoint landing at Cape Canaveral – ready to be used again in a future launch.

This prompted second man on the Moon, Buzz Aldrin to tweet: ‘Falcon 9’s launch and first stage landing in my backyard. Well done.’

Rockets flying from Florida usually head eastward towards the Equator so they fly primarily over open ocean before reaching orbit.

In 2016 the US Air Force started examining whether there was a way to safely bring polar launches to Florida due to wildfires getting closer to Vandenberg.

So far only SpaceX is able to launch polar orbiting satellites from Florida as it has an automated ‘self destruct’ system built into the Falcon 9.

This means that if it is over land and there is a problem the rocket can destroy itself before ‘crash landing’ even if flight control can’t get a signal through to the rocket.

It is expected that most future launch vehicles will include these automated safety systems – allowing to to fly into a polar orbit from Florida.

According to the 45th Space Wing nobody in Cuba was at risk from the Falcon 9. 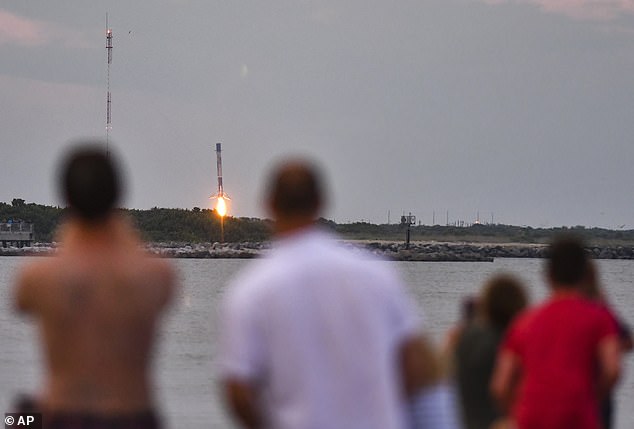 People at Cherie Down Park in Cape Canaveral, Florida watch the booster landing of the SpaceX Falcon 9, Sunday, Aug. 30, 2020

‘It will overfly Cuba, but it’ll be at an altitude that we’re safe, just like when we’re going north,’ said Brig. Gen. Douglas Schiess, commander of the 45th Space Wing.

As the rocket entered the northern parts of north America – after its southeastern ‘kick’ it had to overfly some islands – but again it was at a ‘safe altitude’.

“I know that we’re meeting all the safety requirements now, and it really comes down to being at the right altitude and speed at that time – to make sure that any debris that were to fall would be small enough, or not even impact any land, which makes this ability to launch that from a safe perspective,’ the general said.

The satellite payload being launched by SpaceX will help the Argentine government watch for potential disasters that could disrupt agriculture, mining and fishing.

Jeff Bezos is the richest man in the world and Blue Origin has successfully used a single New Shepard Rocket six times.

Crewed missions for astronauts or tourists have yet to be announced.

SpaceX appears to be leading the way in the billionaire space race with numerous launches carrying NASA equipment to the ISS and partnerships to send tourists to space by 2021.

Musk hopes this will provide an interconnected web of satellites around Earth which will beam down free internet to people all around the world.

Richard Branson and Virgin Galactic are taking a different approach to conquering space.

It has repeatedly, and successfully, conducted test flights of the Virgin Galactic’s Unity spaceplane.

The billionaire mogul has previously said he expects Elon Musk to win the race to Mars with his private rocket firm SpaceX.

It climbs to 50,000ft before the rocket engine ignites. SpaceShipTwo separates from its carrier craft, White Knight II, once it’s passed the 50-mile mark.

The spaceship will then make a sub-orbital journey with approximately six minutes of weightlessness, with the entire flight lasting approximately 1.5 hours.