The Falcon Heavy is being prepared for its second-ever launch, more than a year after SpaceX founder Elon Musk used the rocket to send a car into space. The Falcon Heavy in its so-called Block 5 configuration will launch into orbit around 11.35pm BST (10.35pm UTC) on Tuesday, April 9, with a Saudi Arabian satellite payload. Ahead of the launch, the California-based rocket manufacturer released a stunning photo and a brief video timelapse of the monstrous rocket. The photo shows the three-booster Falcon Heavy inside of a hangar at the historic Launchpad 39A at the Kennedy Space Centre in Florida.

This is the same launchpad astronauts Neil Armstrong, Buzz Aldrin and Michael Collins took off from towards the Moon.

Weather permitting, the Falcon Heavy will mark a historic moment of its own tomorrow with its second-ever voyage.

The incredible rocket comes armed with a total of 27 first-stage Merlin engines across three boosters.

According to SpaceX, the Merlins generate a staggering 2,267 metric tonnes (five million pounds) of thrust, making the Falcon Heavy the most powerful rocket in the world. 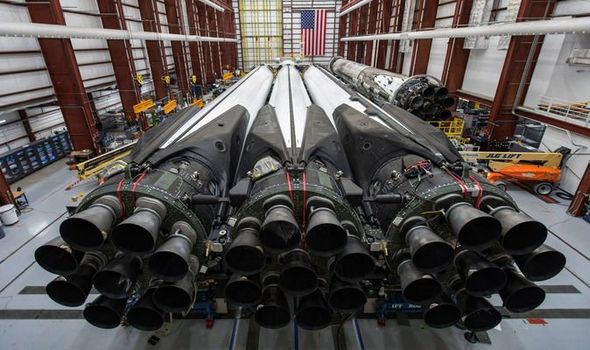 SpaceX’s hangar photo of the Heavy also shows a lone Falcon 9 booster in the background – likely the same rocket that delivered the unmanned Crew Dragon module to the International Space Station on March 2 this year.

SpaceX tweeted: “Falcon Heavy’s 27 Merlin engines generate more than 5 million pounds of thrust at liftoff, making it the world’s most powerful operational rocket by a factor of two.

“Also in the hangar is the Falcon 9 first stage booster that launched Crew Dragon to the @Space_Station last month.”

The company also released a brief timelapse of the rocket being assembled for its static engine test on Friday, April 5.

The static fire test is standard procedure for all SpaceX rocket launches and involves a full-throttle blast of the engines without actual liftoff.

In the video, teams of engineers can be seen mounting the Falcon 9 side boosters to the core rocket.

The Heavy is then hoisted up by cranes onto a mobile platform, which took it out onto the launchpad. 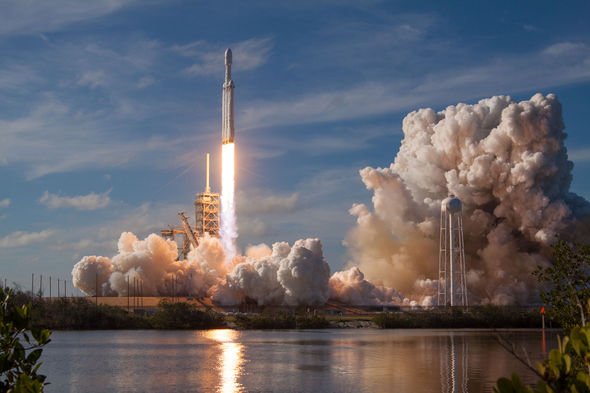 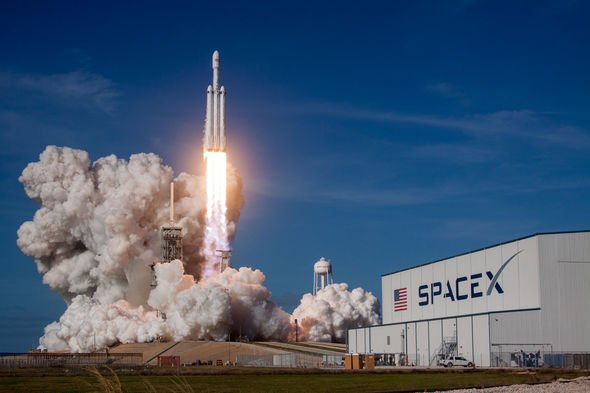 According to SpaceX, the Falcon Heavy has the power to lift nearly 64 metric tonnes into space – more than a Boeing 737 aeroplanes wile with passengers, crew and fuel.

The amount of thrust degenerated by its 27 Merlin engines is equal to 18 Boeing 747 aircraft at liftoff.

“Falcon Heavy was designed from the outset to carry humans into space and restores the possibility of flying missions with crew to the Moon or Mars.”