SpaceX will launch a satellite next year to display ADVERTS

Elon Musk’s SpaceX will launch a satellite into space next year to display ADVERTS that will be recorded on a selfie stick and beamed back to Earth, report claims

A satellite will be launched into space by Elon Musk’s SpaceX next year to display adverts that will be recorded and broadcast on Twitch and YouTube, a new report claims.

Canadian startup Geometric Energy Corporation (GEC) will send a CubeSat on a Falcon 9 rocket with one side featuring a pixel display screen showing adverts.

According to an Insider report, the firm will then have a selfie stick come out of the satellite to film the screen and beam the picture back to the Earth.

The firm funding the satellite is also operating the DOGE-1 Mission to the Moon – the first-ever commercial lunar payload in history paid entirely with DOGE coin.

GEC hasn’t yet said how much it will cost to buy the tokens required to advertise on the orbital billboard or how much the CubeSat will cost to launch.

Details of the design haven’t been revealed, but it is thought the display will look similar to the now defunct Reddit Place or Satoshi’s Place where users create a pixel drawing and pay to show it on the website. 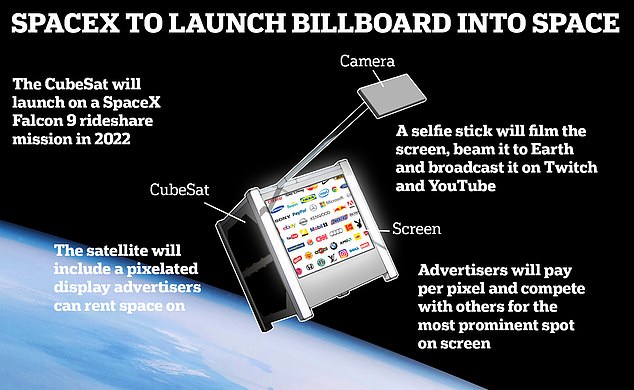 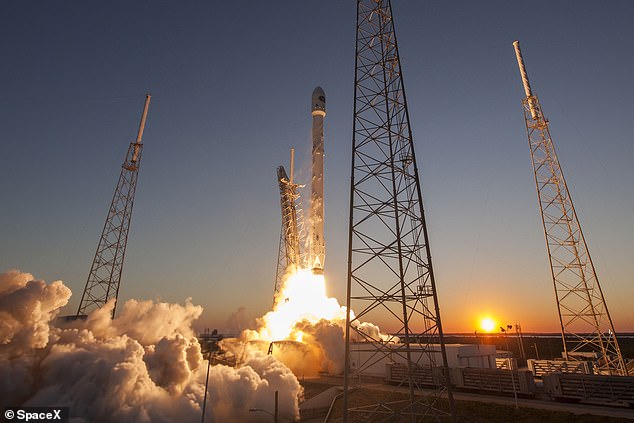 A satellite will be launched into space by Elon Musk’s SpaceX next year to display adverts that will be recorded and broadcast on Twitch and Stream, report claims

The cryptocurrency Dogecoin was launched in 2013 as a ‘fun payment system’ with no banking fees.

A light hearted alternative to Bitcoin, it was inspired by the Shiba Inu dog from the Doge meme popular at the time.

It was created by IBM engineer Billy Markus and Adobe engineer Jackson Palmer with the aim of reaching a broader demographic than Bitcoin.

SpaceX founder Elon Musk has become a major supporter of the cryptocurrency and his firm SpaceX sold a space launch funded by DOGE.

Advertisers will purchase five types of tokens using cryptocurrency payments such as ethereum in order to place an advert, with Doge payments coming later.

The five token types required to place the billboard advertisement are: beta for X coordinate, Rho for Y, Gamma for brightness, Kappa for colour and XI for time.

Samuel Reid, CEO of the Canadian startup GEC said it is currently building the satellite and when in space adverts, logos and art will appear on the screen.

It will go up to space on the same ride share mission that will send the DOGE-1 mission to the Moon, launching at some point in 2022.

Each token purchased by an advertiser will control a different aspect of the display.

Gamma and Kappa tokens will control what the pixel will look like, the XI will say how long it lasts on screen – the more expensive, the longer it remains.

‘I’m trying to achieve something that can democratise access to space and allow for decentralised participation,’ Reid told Insider.

Reid said the platform will be open to anyone that purchases the tokens – even down to artists wanting to show their work in space.

It is an idea that has been in development since 2018, when Reid first tried to convince SpaceX the idea was worth pursuing.

‘There might be companies which want to depict their logo,’ he said, adding ‘maybe Coca-Cola and Pepsi will fight over their logo and reclaim over each other.’ 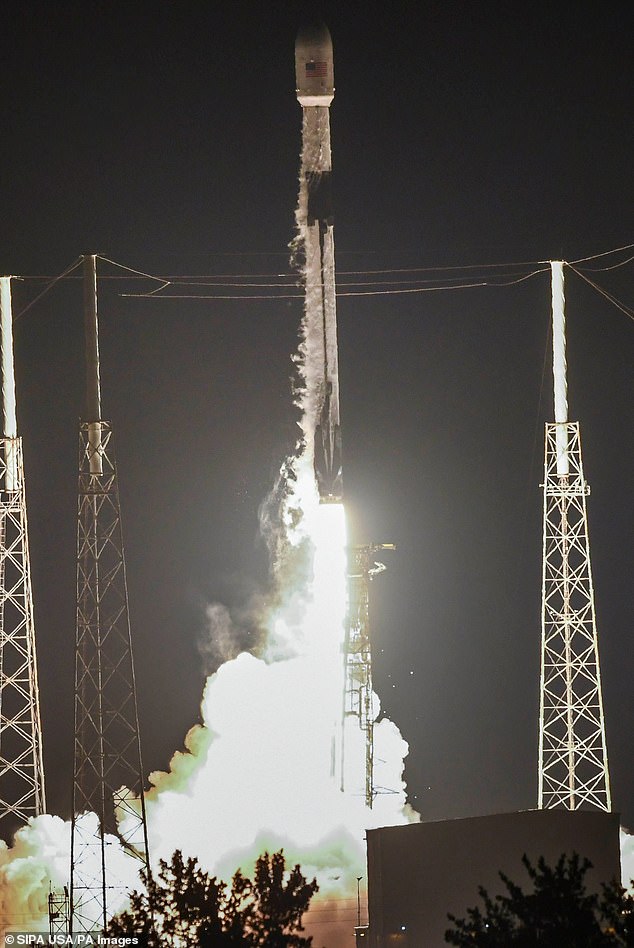 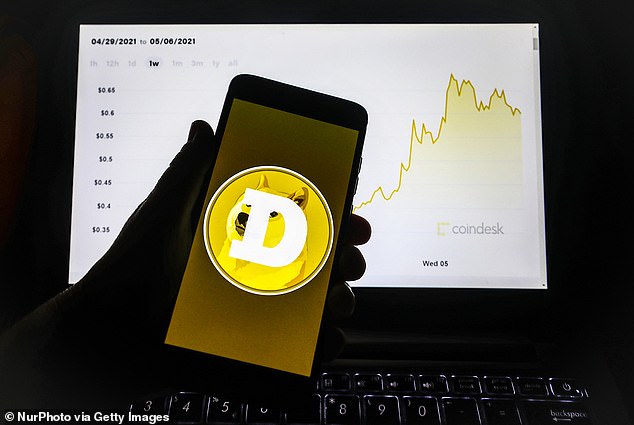 Doge was launched as a ‘fun payment system’ free from traditional banking fees seven years ago, inspired by the Shiba Inu dog from the ‘Doge’ meme

Reid and GEC’s big mission, DOGE-1, is another collaboration with SpaceX and see them launch another 40kg cubesat on a Falcon 9 mission early next year.

‘The payload will obtain lunar-spatial intelligence from sensors and cameras on-board with integrated communications and computational systems,’ the firm said.

‘This mission will demonstrate the application of cryptocurrency beyond Earth orbit and set the foundation for interplanetary commerce,’ said SpaceX Vice President of Commercial Sales Tom Ochinero. ‘We’re excited to launch DOGE-1 to the Moon!’

Amazon founder Bezos had looked set to be the first of the three to fly to space, having announced plans to launch aboard his space company Blue Origin’s New Shepard spacecraft on July 20.

However, Branson has now announced he’s planning to make a suborbital flight nine days before Bezos and his brother. He revealed on Twitter that he plans to be Astronaut 001 on Virgin Galactic’s July 11 test flight.

a, launch, satellite, SpaceX, will
You may also like: