One of the biggest impediments to traveling across the galaxy, or to a nearby star, is that our spacecraft can’t carry enough fuel to cross light years of ever-expanding space.

But a new technology that is heading up into orbit tonight onboard SpaceX’s Falcon Heavy rocket could help eliminate that obstacle to interstellar travel.

LightSail 2 is set to be the first spacecraft in Earth orbit propelled solely by sunlight. Spearheaded by The Planetary Society, the partially Kickstarter-funded project will take to the skies tonight if the 11:30 p.m. Falcon Heavy launch is successful.

Read More: Elon Musk says SpaceX will try its ‘most difficult launch ever’ tonight. Here’s how to watch live.

“This is history in the making — LightSail 2 will fundamentally advance the technology of spaceflight,” Bill Nye, America’s ubiquitous science communicator and CEO of The Planetary Society,said in a press release.

LightSail’s mission to orbit the Earth is a multi-step process.

First, the Falcon Heavy rocket will launch, and then another spacecraft named Prox-1 will separate from the rocket. Prox-1 then births LightSail 2, a bread loaf-sized, 11-pound cube satellite. The floating cube eventually deploys an antenna, solar panels, and the booms and solar sail itself. All told, LightSail 2 will be in space for a couple of weeks before the solar sails unfurl.

“One of the big challenges in creating LightSail […] 2 was to figure out how to cram all that stuff into a little tiny spacecraft,” Bruce Betts, chief scientist and LightSail program manager at the Planetary Society, said in a press conference. 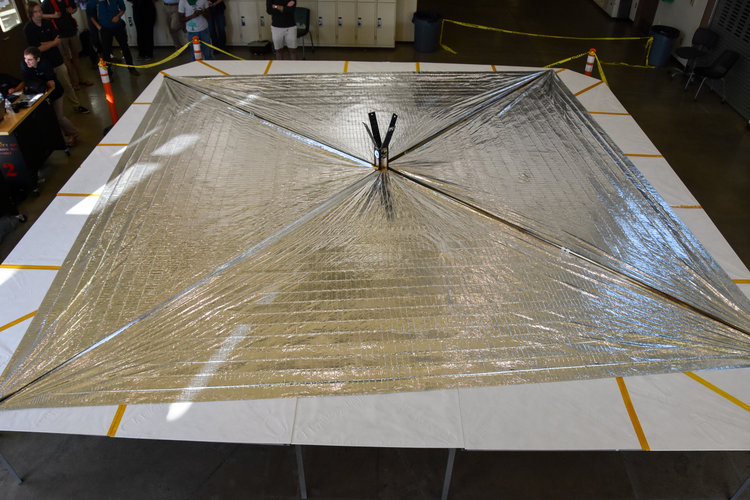 LightSail 2’s four triangular sails, which resemble in form and function the sails of water-skimming ships, merge to form a gigantic square sail that’s 344 square-feet in size. The sails are made of Mylar, a tear-resistant, highly-reflective fabric that’s thinner than the diameter of a human hair.

The project, which cost $7 million dollars, was funded in part by a 40,000-person Kickstarter campaign in 2015.

Using light to travel the cosmos

Most spacecraft traverse the cosmos using rocket fuel, which is finite. Once the propellant runs out, the rocket can no longer control its speed or direction, and floats in the vacuum of space.

But a solar sail craft has an unlimited supply of energy, according to Nye. That’s because it’s continuously pushed through space by the pressure of sunlight.

Sunlight consists of tiny particles called photons, which have no mass, but have momentum as they’re spewed from the sun. Even though each photon’s momentum is minuscule, the collective push is enough to get a solar sail moving.

As light reflects off the sail, it transfers momentum to the sail and pushes it.

“The total force on the sail is approximately equal to the weight of a house fly on your hand on Earth to give you an idea of how small it is,” Betts said. “But again, the key is that it’s constant. It’s always there.”

Part of what enables LightSail 2 to harness sunlight effectively is that the solar sail can change its orientation based on where the sun is. Rigid booms hold the sails out, and the craft uses magnetometers that read changes in the Earth’s magnetic field to orient itself. Then, using a series of gyros and a momentum wheel, LightSail 2 spins accordingly.

For each orbit around Earth, LightSail 2 has to make two 90-degree turns of its solar sail, so that either the sail is turned away from the Sun (akin to sailing downwind) as the craft moves away, or perpendicular to the sun as the craft moves towards the light, much like tacking a sailboat. 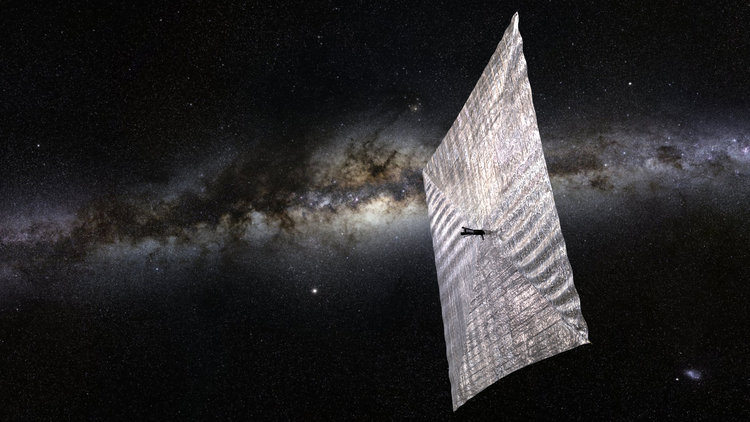 An artist’s rendition of a solar sail in space.NASA

But what, precisely, will happen to the sails in space is still a bit of a mystery, Nye said in a press conference. “Will it billow like a square rig ship? Will take on a nice curve like a racing jib? Will it be something in between?”

Solar sailing has been more than 40 years in the making

In 1976,Carl Sagan appeared on The Tonight Show to talk about solar sailing, and the idea has percolated through the space community ever since.

“That was purely a deployment test. We sent the CubeSat up. We checked out the radio, the communications, the overall electronics, and we deployed the sail and we got a picture of that deployed sail in space,” Jennifer Vaughn, chief operating officer of the Planetary Society, said at a press conference. 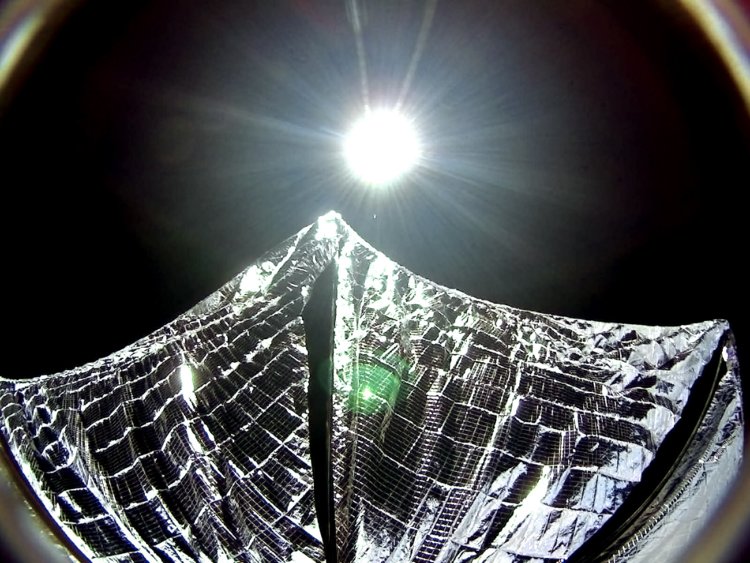 This image was captured by a camera aboard LightSail 1 on June 8, 2015, shortly after solar sail deployment. It was color-corrected by Dan Slater to remove the camera’s artificial purplish tint based on ground test images, and is a closer approximation to what the human eye would see.The Planetary Society

LightSail 2 will go to higher orbit and perform more complex maneuvers, with the goal of rising farther from Earth. Its shiny sail should be visible from Earth’s surface with the naked eye for about a year, the researchers said.

If LightSail 2 is successful, it will demonstrate that spacecraft can cruise through space without the need for fuel. “It’s a game changer,” Nyesaid in an explainer video. “Maybe one day in the future we will sail [a spacecraft] to another star.” 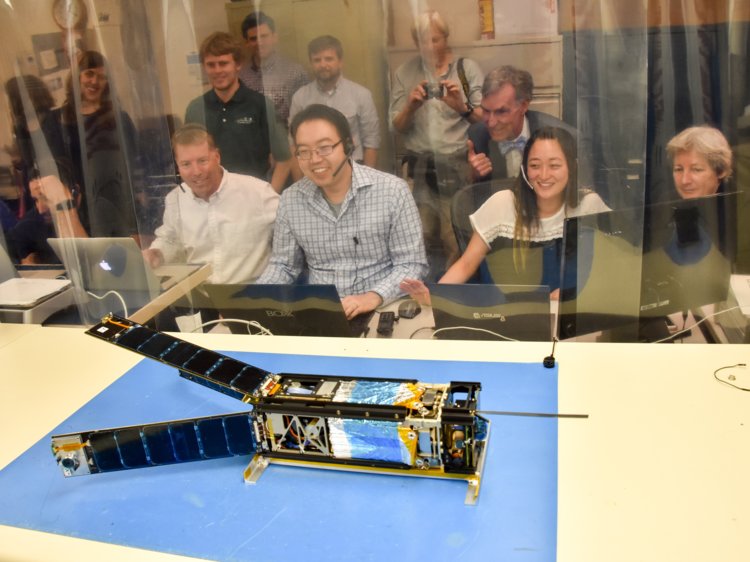 Since the technology should allow researchers on Earth to maneuver the solar sail much like skippers steer their sailboats, LightSail 2-like craft could one day harness the sun’s rays to travel in any direction.

“Solar sails are just ideal,” Nye said. “People have speculated on using solar sails as cargo ships to take material to Mars and so on.”

The solar sail will help us travel farther in space without running out of fuel, enabling humanity to reach nearby star systems sooner rather than later. That, in turn, will help scientists answer fundamental questions about our place in the cosmos.

“There are two questions everybody asks. Where did we all come from, and are we alone in the universe? And if you want to answer those questions, you have to explore space,” Nye said. Part of that mission is traveling to asteroids, Mars, and Europa, he added.

F---, Falcon Heavy, Space, SpaceX
You may also like: