Tiny lenses around two micrometres wide (thinner than the width of a human hair) made using spider silk could allow doctors to take detailed medical images.

A study found a specific form of spider silk is strong enough to hold an ultra-small droplet of resin which can focus a laser beam.

Scientists hope the technique could one day be used to capture high-resolution images from inside the human body.

Scroll down from video 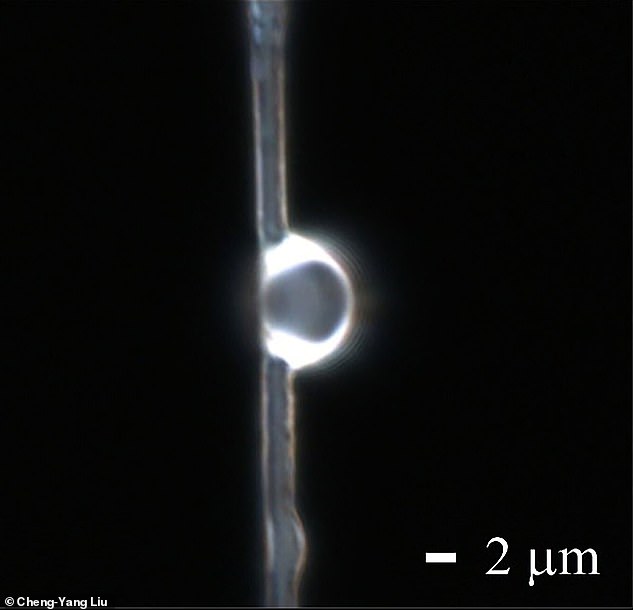 A study found a specific form of spider silk is strong enough to hold an ultra-small droplet of wax (pictured) which can focus a laser beam. Scientists hope the technique could one day be used to make large high resolution images of biological areas

The lenses are made from ‘dragline’ spider silk which is produced by daddy long legs to form the frame of their webs.

Resin was placed on the fibre, which turned into a dome, and then it was solidified using ultraviolet light.

The spider silk has exceptional tensile strength and doesn’t break under the mass of the resin.

Professor Cheng-Yang Liu of Yang-Ming University in Taiwan, who led the research, said: ‘Dragline silk is an interesting natural material because of its significant features, such as high elasticity, great toughness and large tensile strength.

Spider numbers in the UK are dropping but the number of dragonflies, mayflies and mosses are increasing and the species thriving due to climate change, study finds.

The number of arachnids in Britain had dropped by about seven per cent over the past 50 years.

Using information shared by members of the public in annual surveys over the past five decades, researchers found insects were bucking the drop in biodiversity trend.

Unfortunately this isn’t the case for spider and centipedes but work to improve air quality and water quality do seem to be paying off for some species.

‘Compared to its weight, the strength of dragline silk is greater than steel.’

Spider silks are already being used in a wide range of medical products because they are superior to synthetic fibres and do not harm living cells.

When the team shined a laser through the condensed silk dome, it created what is known as a high-quality photonic nanojet.

This beam can provide ‘super-resolution’ imaging for biomedical appliances, and the spider silk lenses could open new windows for medics to observe inside the human body.

There are a variety of Imaging techniques in biology, the most common being magnetic resonance imaging (MRI).

The lens size can be easily adjusted by leaving the spider silk under the resin drip for a longer time period.

This allows for the creation of nanojets capable of different forms of imaging.

Professor Liu added: ‘The dome lens with flexible photonic nanojets is suitable for imaging the nanoscale objectives in different depths within biological tissue.’

The findings were published in the Journal of Applied Physics.