The science behind Star Wars: Scientist claims we COULD live on our own distant ‘exomoon’ worlds like Tatooine and Endor in the films… we just have to find them first

In a galaxy far, far away, in the fictional world of Star Wars – heroes and villains live on far-flung moons.

But could human life really thrive on the worlds of Tatooine, Jedha and Endor?

Star Wars-obsessed astrophysicists have long debated what the reality of those types of planets being able to sustain life is.

Now Dr Phil Sutton, a planetary scientist and lecturer at the University of Lincoln, has analysed whether life could exist on distant  ‘exomoons’ such as Kepler-16b – and if it would it really look similar to that depicted in the George Lucas epic.

‘While it might sound as unfathomable as Jabba the Hutt on a treadmill, in fact, many of the worlds depicted in Star Wars could exist in our universe,’ he told MailOnline.

Tatooine, Luke Skywalker’s home planet from the first Star Wars film (pictured), is notable for its two suns and a real-life analogue may exist in the form of Kepler-16b

WHAT IS TIDAL LOCKING?

Tidal locking is the phenomenon which sees a moon appear fixed in place around a planet, with only one side being visible.

The lunar cycle is an example of this, with the moon completing one trip around Earth every 28 days, the same time it takes to spin around entirely.

it is because of tidal locking that the ‘dark side of the moon’ exists.

For now, exomoons remain merely theoretical as none have been detected due to current telescopes not being powerful enough.

But Dr Sutton’s work focuses on their role in the universe, and their potential ability to harbour life.

He, along with thousands of other astrophysicists around the world, are casting their gaze further afield and beyond the reach of our Sun, with more than 4,000 exoplanets already discovered by specific missions, such as TESS and SETI.

The next step, Dr Sutton believes, is finding the moons that orbit them.

The issue with hunting down a far flung celestial satellite which may real-world version of Tatooine, outside of not having a Millennium Falcon to reach it, is spotting them in the first place.

A prime candidate for our very own Tatooine – Luke Skywalker’s home world from the first Star Wars film – could be hiding in orbit around Kepler-16b.

The planet, roughly the same size as Saturn and in a binary system, meaning it orbits two stars, resides squarely in the middle of a habitable zone where liquid water can exist.

Astronomers are straining to see if it has a moon, because the planet itself is far too big to be habitable itself, meaning we must turn our attention to its moons in hope of Earth 2.0.

If one is present, it will potentially have liquid water and be similar in size to Earth, making it very likely to be habitable – making it eerily similar to Tatooine.

‘The planet itself is not habitable as it is too large,’ Dr Sutton says.

‘But it does have the potential to support a moon; recent research suggests that an earth-sized moon could orbit this binary planet and be habitable, proving that moons orbiting planets just like Tatooine can exist.’ 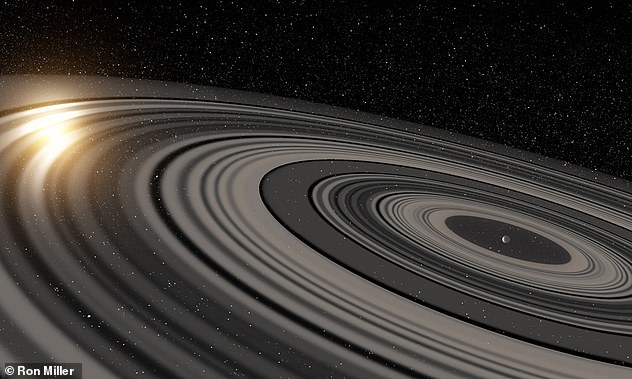 Dr Phil Sutton from University of Lincoln studied a ‘super Saturn’ called J1407b (artist’s impression, pictured) to find possible moons. They are very difficult to spot but Dr Sutton claims they may be the best hope for finding extraterrestrial life

Dr Sutton has spent years trying to find a way to spot exomoons, focusing on the exoplanet J1407b, to no avail.

He spotted a gap in the planet’s image and ran computer simulations to see if it could have been formed by an orbiting piece of rock – a moon.

His research found the opposite, that on this occasion the promising blip on the surface of the distant planet could not be explained by the presence of a moon.

‘Hopefully, as we do more investigations into our vast universe, these elusive exomoons will become more common, similar to what has happened to the explosion in exoplanet discoveries in the last few decades, which now stands at just over 4,000 confirmed exoplanets,’ Dr Sutton said.

‘This is an exciting possibility, and would be a genuine potential for living outside of our own Solar System, but right now we’re not at the level seen in Star Wars. Yet.’

But as the possibility of finding the first exomoon creeps ever-closer, astrophysicists are grappling with another problem George Lucas never faced.

It seems almost impossible for an Earth-like moon to form naturally around vast planets.

Dr Sutton told MailOnline: ‘A recent study showed that Hot Jupiter’s – large gas giants that are close to their stars – cannot form earth-sized exomoons as they move inwards to their current location close to the star.

‘A more likely scenario for a planet to have a sufficiently large moon that would be habitable, like those in Star Wars, is if they were smaller planets that came to close to the planet and were captured.

‘We do know this can happen as Neptune captured a dwarf planet with an atmosphere which is now known as Triton.

‘Triton is in fact larger than Pluto, yet is classed as moon due to being captured by the gravitational field of Neptune.’

From the double sunsets on Tatooine to the frozen wasteland of Hoth, Star Wars is filled with a galaxy of fantastical planets.

While the words in Star Wars preceded Nasa’s discovery of real planets outside our solar system, it appears in some cases fiction isn’t too far from the facts

‘When we send our spacecraft into the solar system and point our telescopes beyond, we often see things that seem taken right out of the Star Wars universe,’ Nasa recently wrote in a blog.

For instance, Saturn’s moon, Mimas, has become known as the ‘Death Star’ moon because of how its 80-mile wide Herschel crater creates a resemblance to the Imperial battle station.

Mimas was first spotted by Nasa in images taken by the Pioneer 11 when it flew by Saturn in 1979.

This was only two years after the first Star Wars came out – so that film’s iconic Death Star was very much in the public consciousness.

It has a crater known as Herschel that is 80 miles across – leaving a giant mark across a moon just 246 miles across.

Even more dramatically, the crater has five-mile high walls, and the deepest part of the crater is six miles deep.

If Mimas was scaled up to Earth-size proportions, the crater would leave a scar on this planet larger than Australia. 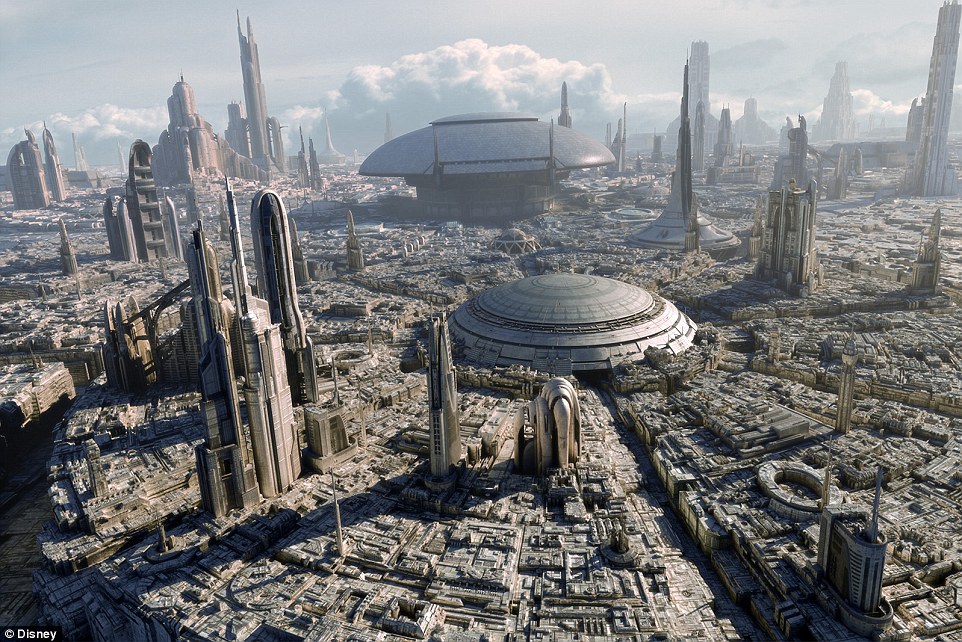 The Star Wars fiction world features a city occupying an entire planet, known as Coruscant. The gleaming towers of Coruscant in the film are supposed to represent the power and prosperity of Republic civilisation