Stephen Hawking´s words from beyond the grave bring tears to…

Speaking from beyond the grave, Professor Stephen Hawking has told a new generation growing up in an increasingly insular world: ‘Remember to look up at the stars and not down at your feet.’

The eminent cosmologist, who had motor neurone disease and died in March, had his final public thoughts broadcast at a special event to launch his last book, Brief Answers To The Big Questions.

Prof Hawking’s words of advice and defiance, echoing from an Imax screen at London’s Science Museum, brought tears to the eyes of his daughter Lucy. 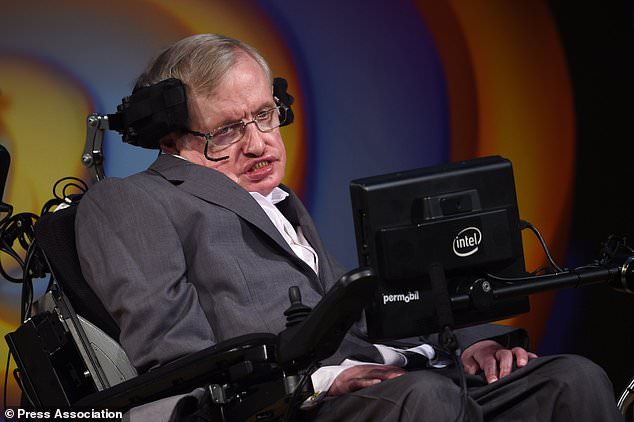 He warned that education and science were ‘in danger now more than ever before’.

The professor added: ‘We are … in danger of becoming culturally isolated and insular and increasingly remote from where progress is being made.

‘With Brexit and Trump now exerting new forces in relation to immigration and the development of education, we are witnessing a global revolt against experts, and that includes scientists.

‘What lies ahead for those who are young now? I can say with confidence that their future will depend more on science and technology than any previous generation’s has done.’

Global warming, overpopulation, species extinction, deforestation and the degradation of the oceans were just some of the challenges science had to meet, he said. 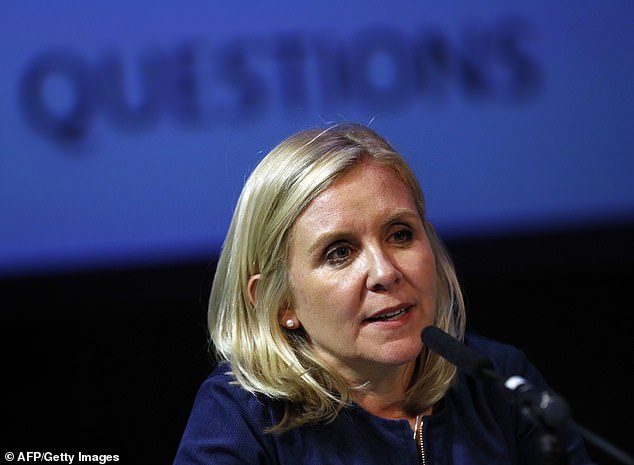 Daughter of British scientist Stephen Hawking, Lucy Hawking, answers questions during an interview at the global launch of Stephen Hawking’s final book “Brief Answers to the Brief Questions” at the Science Museum in London

Prof Hawking ended his emotional address to younger generations with these stirring words: ‘Remember to look up at the stars and not down at your feet. Try to make sense of what you see, and wonder about what makes the universe exist.

‘Be curious, and however difficult life may seem there is always something you can do and succeed at.

‘It matters that you don’t give up. Unleash your imagination. Shape the future.’

Lucy Hawking, who attended the book launch, was asked how it felt to hear her father once again speaking through his famous voice generation computer.

She said: ‘It was very emotional. I turned away because I had tears forming in my eyes.

‘I feel sometimes like he’s still here because we talk about him and we hear his voice and we see images of him, and then we have the reminder that he’s left us.’ 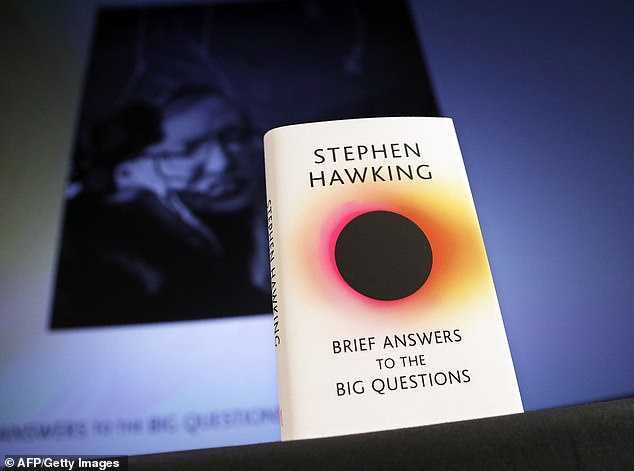 Her brother Timothy said that while reading the new book he could hear his father’s voice ‘leaping off the page’.

He added: ‘It’s been very nice to connect with him again in that way.’

Prof Hawking’s ashes have been interred at Westminster Abbey between the remains of Sir Isaac Newton and Charles Darwin.

Lucy Hawking said: ‘We think he would have been very honoured to take his place in history.

‘He never liked to be alone; he always wanted to be in the centre of everything.’

In the book, Prof Hawking sets out his answers to ‘big questions’ about topics ranging from time travel to Brexit.

Brief Answers To The Big Questions is published by John Murray, priced £14.99.

FROM THE BIG BANG TO BLACK HOLES: HOW STEPHEN HAWKING HELPED EXPLAIN THE UNIVERSE’S BIGGEST MYSTERIES

Stephen Hawking probed the very limits of human understanding both in the vastness of space and in the bizarre sub-molecular world of quantum theory.

Through his groundbreaking theories, the legendary physicist examined the origins of the universe and helped explain the behaviour of black holes. 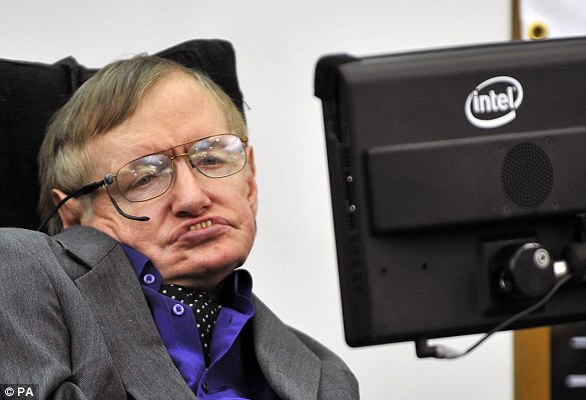 Stephen Hawking, who sought to explain some of the most complicated questions of life while working under the shadow of a likely premature death, has died at 76

One of Hawking’s first key ideas was how space and time react within the brutal confines of black holes.

Black holes are regions of space with a gravitational field so intense that no matter or radiation can escape.

The objects are so powerful they bend time and space in bizarre ways, and in 1970 Hawking showed how black holes alter ‘space-time’.

‘Space-time’ is a theory used by physicists to describe the fusion of 3D space and time into a four-dimensional continuum.

Up until the ’70s physicists had known Einstein’s theory allowed for ‘singularities’ – points where space-time appeared to be infinitely curved.

But it was unclear whether or not these singularities actually existed.

Birkbeck College physicist Sir Roger Penrose showed that singularities do exist as they can form in black holes.

Alongside Sir Penrose, Hawking applied the same idea to the universe in its entirety in 1970.

They showed that Einstein’s theory predicted a singularity in our distant past: The Big Bang.

Black holes are regions of space with a gravitational field so intense that no matter or radiation can escape.

Their field is so intense that they form their own set of physical laws unlike anything else in the universe.

Hawking devised the second law of black holes, which states that the total surface area of a black hole will never get smaller.

In separate work, Hawking sparked the ‘no hair’ theorem of black holes.

This states that black holes can be characterised by three numbers – their mass, charge and angular momentum.

The ‘hair’ in Hawking’s idea is other information that disappears when it falls into the black hole.

While a black hole with the mass of the sun would take longer than the age of our universe to evaporate, smaller ones disappear faster.

Near the end of their lives they release heat at a dramatic rate, with an average-sized black hole releasing the energy of a million hydrogen bombs in just a tenth of a second.

Hawking’s drew on ‘quantum theory’ for the finding – the branch of physics concerned with how the universe works at the subatomic level. 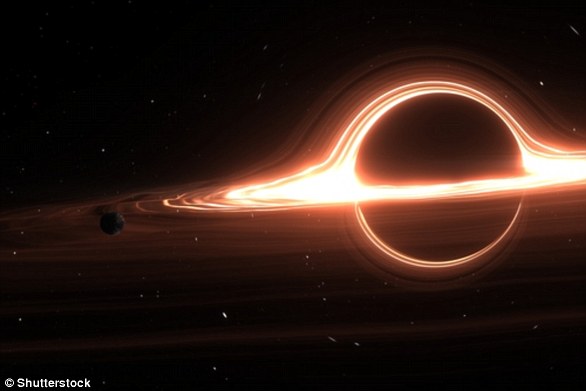 Through his groundbreaking theories, the legendary physicist helped explain the behaviour of black holes (artist’s impression) and examined the origins of the universe

Many physicists believe the universe inflated rapidly shortly after the Big Bang.

Hawking was one of the first to show how galaxies may have formed during this explosion of time and space.

He found that quantum fluctuations – tiny variations in the distribution of matter – grew into the galaxies that dot the cosmos today.

This is because strong gravitational forces made matter clump together.

Hawking’s theory is supported by recent observations of the faint afterglow of the Big Bang, which spotted the sort of variations Hawking worked with.

1983 How the universe began

Hawking is best known for his attempts to combine two key theories of physics: Quantum theory and Einstein’s general relativity.

While quantum theory covers how tiny subatomic particles stitch together the fabric of our universe, general relativity deals with larger objects.

It describes how galaxies, stars, black holes, planets and more interact with one another via gravitational forces.

Much of Hawking;s work focussed on combining quantum theory and general relativity with Einstein’s theory of gravity.

He suggested that this new theory, known as quantum gravity, could fill in many of the gaps of our current understanding of physics and the universe.

In 1983 the physicist partnered with Chicago University’s Professor Jim Hartle to propose a ‘wave function of the universe’.

Known as the Hartle-Hawking state, this notion is meant to figure out how the universe began through quantum mechanics.

In theory, this could be used to understand the properties of the universe around us.

Hawking’s bestselling book A Brief History of Time has sold more than ten million copies since it was published in 1988.

The book, which described the structure, origin, development and eventual fate of the universe, was a surprise success for the relatively unknown physicist, staying in the Sunday Times bestseller list for 237 weeks.

Hawking wrote the book for readers with no knowledge of any scientific theories.

The physicist joked himself that many who owned the book struggled to understand its complexity and never finished it.

The book ultimately propelled Hawking to stardom, with the physicist publishing or co-publishing 15 books in total and writing or starring in multiple scientific documentaries, television shows, films and more.

What happened before the Big Bang?

At the time of the Big Bang 13.8 billion years ago, all matter in the universe erupted from a singularity to create the cosmos.

But scientists are unsure what happened before then.

In a recent TV interview, Hawking said ‘nothing was around before the Big Bang’.

Instead, time and space existed in a ‘bent state’ that was distorted along another dimension.

The physicist believes the Big Bang was the formation of what we now regard as time because the event broke down the laws of physics.

This means that anything that preceded it cannot be applied to our understanding of time and existence.

grave, Hawking, S, Stephen, words
You may also like: