An amazing image of our nearest celestial neighbour – the Moon – shows it surrounded by clouds making it appear like the ringed gas giant Saturn.

It was taken by photographer Francisco Sojuel after a six mile hike to the base camp of volcano Acetenango in Guatemala.

This stunning image has captured a new perspective of the Moon and was taken just before sunrise during its slight crescent phase.

In the picture clouds are forming around the Moon as it is lit up by the Sun. 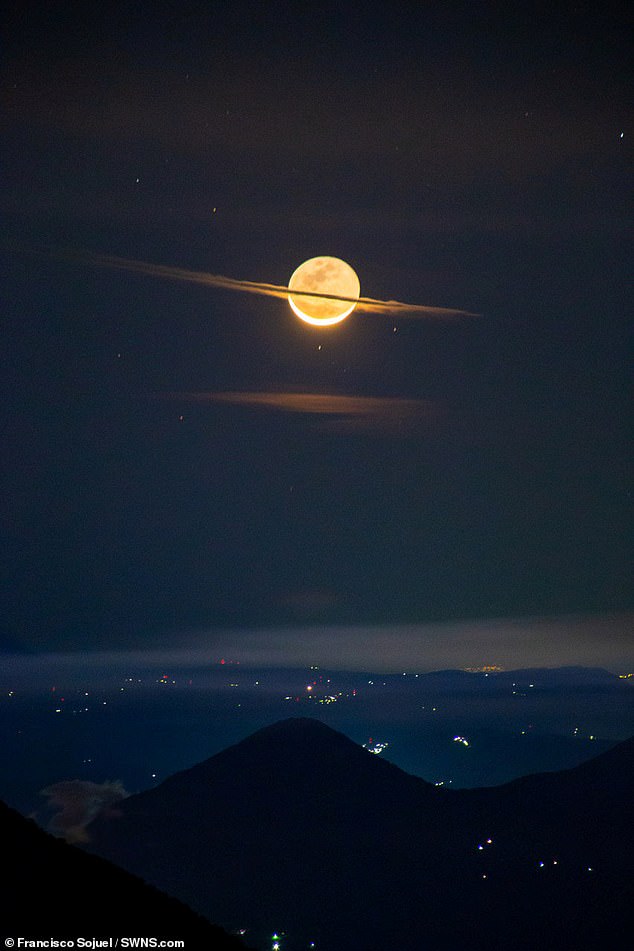 The moon disguised as Saturn as clouds form rings around it, above the base camp of volcano Acatenango, Guatemala

Around it on the clear night are so stars shining above the mountains and lights below from small Guatemalan towns.

Mr Sojuel, who lives in Santiago Atitlán, Guatemala, said it was an amazing moment.

‘This is one of the most beautiful moments that I have managed to capture with the camera,’ he said.

‘You can express different feelings when looking at the photograph.’

NASA shared the stunning image on its Astronomy Picture of the Day website – where it hosts images from around the world showing our universe.

‘Why does Saturn appear so big? It doesn’t — what is pictured are foreground clouds on Earth crossing in front of the Moon,’ the space agency wrote.

‘The Moon shows a slight crescent phase with most of its surface visible by reflected Earthlight known as ashen glow. 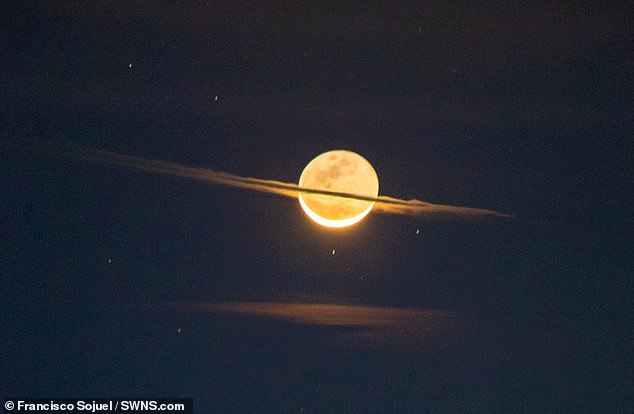 ‘The Sun directly illuminates the brightly lit lunar crescent from the bottom, which means that the Sun must be below the horizon and so the image was taken before sunrise,’ according to NASA.

Sojuel said it was a unique moment presented to him by the universe and is very happy at the amazing feedback he’s received from people who see the photo.

‘It also makes you wake up your imagination because it seems like another planet and makes you question how the moon and that thin cloud managed to align itself.’

WHAT EVIDENCE HAS BEEN FOUND FOR WATER ON THE MOON?

A number of researchers have made claims that water may be found on the moon, either above or below its surface or in its soil, by future visitors.

Such discovery could mean future lunar colonies could harvest water on the moon without having to bring it with them from Earth.

They could also convert it into hydrogen and oxygen for rocket fuel or oxygen to breathe, scientists claim.

In February 2018, a study found by the Space Science Institute in Boulder, Colorado water in the form of OH – a more reactive relative of H2O – all over the lunar surface.

In September 2017, experts created the first map of water and its building blocks trapped in the uppermost portion of the Moon’s soil.

They claimed that water in this form is present nearly everywhere on the lunar surface.

A separate study that month, showed that the surface of the moon holds more water than we thought.

It suggests the interior of our natural satellite could hold a deep reservoir of water.

This finding bolsters the idea that the lunar mantle is surprisingly water-rich, which could make colonising it for future space exploration much easier.

Image, Moon, of, sho, Stunning, the
You may also like: