‘Suck my d**k and b***s’: Woman loses NASA internship over a tweet

A woman lost her internship at NASA following a vulgar series of tweets in which she unwittingly told a senior space adviser to ‘suck my d**k and b***s’ just hours after she was accepted for the job.

‘EVERYONE SHUT THE F*** UP. I GOT ACCEPTED FOR A NASA INTERNSHIP,’ she wrote.

Her tweet got a response from Homer Hickam, a former NASA engineer and member of the National Space Council – which manages NASA – who wrote: ‘Language.’

But the boorish intern was left red-faced when Hickam responded: ‘And I am on the National Space Council that oversees NASA.’

Hickman later said in a blog post he learned that the unnamed intern had been fired following their exchange, and sympathised with her. 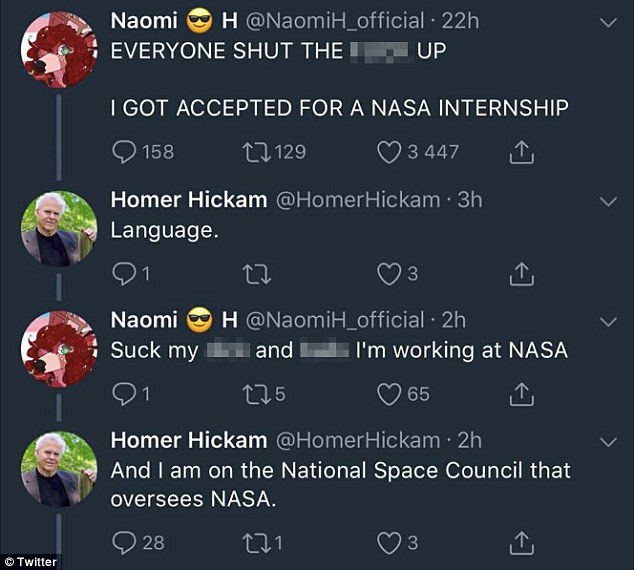 The 75-year-old claimed his Twitter exchange with the woman was not the reason she was stripped of the offer, and that he never intended to get her in trouble.

He blamed Naomi’s ‘friends’ for her dismissal, claiming they spread the exchange on social media long after he had deleted his messages for fear of getting the intern in trouble.

‘I learned she had lost her offer for an internship with NASA,’ he wrote in a post on his website Tuesday.

‘This I had nothing to do with, nor could I since I do not hire and fire at the agency or have any say on employment whatsoever.

‘As it turned out, it was due to the NASA hashtag her friends used that called the agency’s attention to it long after my comments were gone.’

WHO IS HOMER HICKMAN? 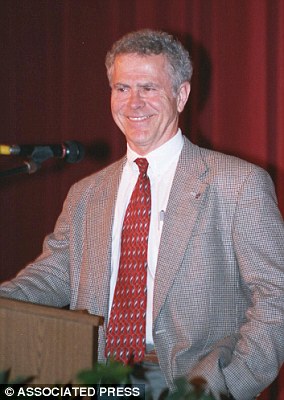 Homer Hickman is a former NASA scientist and member of the US National Space Council.

During his 17-year career at NASA from 1981 to 1998, Hickman worked as an aerospace engineer and trained NASA astronauts.

The 75-year-old’s memoir about his space career, Rocket Boys, was a New York Times best seller and was the basis for the 1999 film October Sky.

The body will help US government agencies like NASA organise and coordinate their space efforts.

The body will help US government agencies like NASA organise and coordinate their space efforts.

The micro-blogging site has been split on whether the former intern should have lost her job over the tweets.

But user Dan Miller disagreed, suggesting Hickman was to blame for Naomi’s misfortune.

He wrote: ‘Homer Hickam should be less uptight about somebody being excited that they got to work at NASA. Since when is it unacceptable to swear on Twitter?’

Andrew Lopez made the point that many employers use job applicants’ social media profiles to gauge their suitability for roles.

He tweeted: ‘Unfortunately about 80% of employers go through your social media and if they don’t like what you post etc they can fire you.

‘A lot of people hate this but this is their regulations so either be careful what you say or move along.’