An Apple Watch lost to the ocean after a large wave knocked it off the wrist of its surfing owner has been found in perfect working order six months later.

Robert Bainter, a frequent surfer at Huntington Beach, California, used the device to monitor his activity and stats.

After discovering it had fallen from his wrist he activated Lost Mode and eventually replaced the device.

A passing beach-goer spotted it in the sand three miles away from where it was lost and contacted Mr Bainter via the on-screen contact information that was displayed. 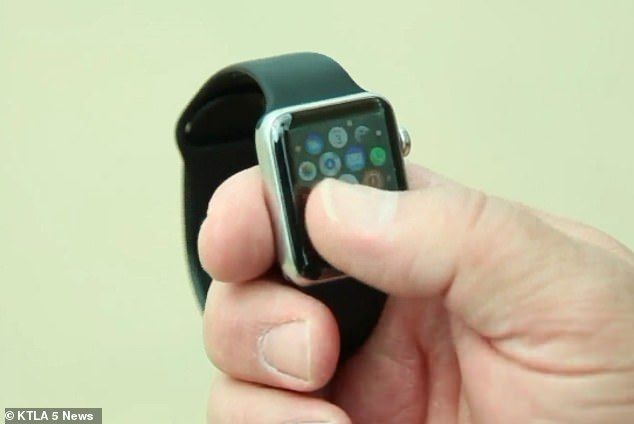 After discovering it had fallen from his wrist, Mr Bainter activated Lost Mode and eventually replaced the device. A passing beach-goer spotted it three miles away from where it was lost and, despite a hazy screen, was in perfect working order

WHAT IS LOST MODE AND HOW DOES IT WORK?

It lets users assign a phone number and onscreen message for anyone who finds it.

If it is recovered an owner can unlock it again using the Web or iOS versions of Find My iPhone.

‘This thing has been my good luck charm. I would use it quite often to show the surf and how fast you were going. It would even show you where you were on the beach,’ Robert Bainter told KTLA.

‘A huge wave came and you know I was loving it, rode it and then I pick up my arm and like “Oh My God, what just happened”.’

Mr Bainter says he spent an hour searching for the device before turning on the Lost Mode via the ‘Find my iPhone’ app on his handset.

The avid Apple fan eventually resigned himself to the inevitable demise of his gadget and purchased a replacement, believing it to be lost forever.

A man scouring the beaches for sea shells found the Apple Watch and got in contact with Mr Bainter to reunite him with it.

Despite a slightly hazy display caused by saltwater eroding the watches’ glass surface, it appears to be fully operational.

‘It worked fine, it didn’t skip a beat, all the information was there, all the apps were there,’ Mr Bainter added.

Apple Watches are now officially certified as water-resistant, but earlier versions were not.

Apple has always been cautious in its avoidance of comprehensive terms such as waterproof, and instead opted for labels such as water-resistant.

The original Apple Watch and Series 1 were considered to be splash- and water-resistant but the devices were not intended for submersion.

Later versions like the Series 2, 3 and 4 are considered to be water-resistant to 160 feet (50 metres), but Apple recommends that you stick to shallow-water swimming and avoid ‘high-velocity water’.

It appears the depths of the ocean and the power of the large wave mean Mr Bainter’s device exceeded expectations.

Apple, loses, reuni, Surfer, Watch
You may also like: