Farmers should converse with a cow face-to-face if they want them to unwind, a new study suggests.

Austrian researchers found cows were more relaxed when spoken to directly by a human, compared with when they were played voice recordings over a loudspeaker.

The experts observed signs of relaxation when cows were spoken to in-person, such as heart rate variability and the positions of their necks.

Feeling stress can stop cows from producing milk and make their meat tough, dry and flavourless, according to farmers. 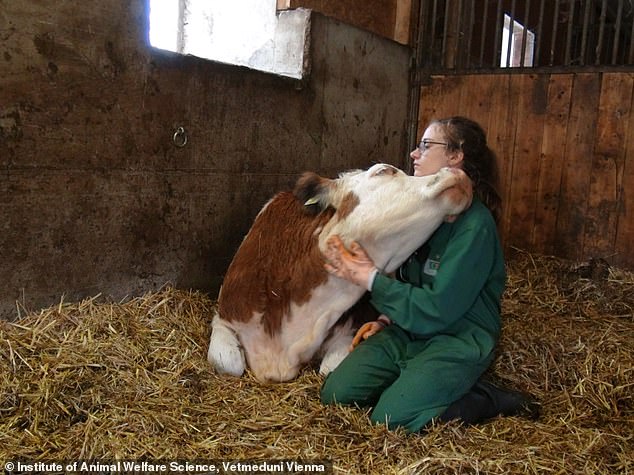 It’s already known voices can reduce stress for cattle, but busy farmers could spend more time with cows in-person, as opposed to playing them pre-recorded audio.

The quality of the animal-human relationship and the welfare of animals can be improved by gentle interactions such as stroking and talking, the team claim.

‘Cattle like stroking in combination with gentle talking,’ said Annika Lange of the University of Veterinary Medicine in Vienna, Austria.

‘In scientific contexts, a recording of a human voice speaking gently could be used to relax the animals, because it can be difficult to repeat the same phrases in the same way during experiments.

‘Interactions may be less positive when they become artificial.

‘I hope that stockpersons or farmers will more often interact gently and speak some nice words when they are working with cattle in the future.’

Lange stressed to MailOnline that her study did not investigate or find anything connected to meat quality.

‘Animal welfare is considered more than just the absence of pain or suffering – good welfare also includes positive experiences for the animals,’ she said.

‘Our study is looking mainly at the wellbeing of the animals, and we found that the cattle enjoyed the stroking and talking and were relaxed and comfortable.’

Previous studies have found that a good human-animal relationship and good handling of cows are associated with higher milk yields, while gentle touching reduces fear of humans and pre-slaughter stress in beef cattle. 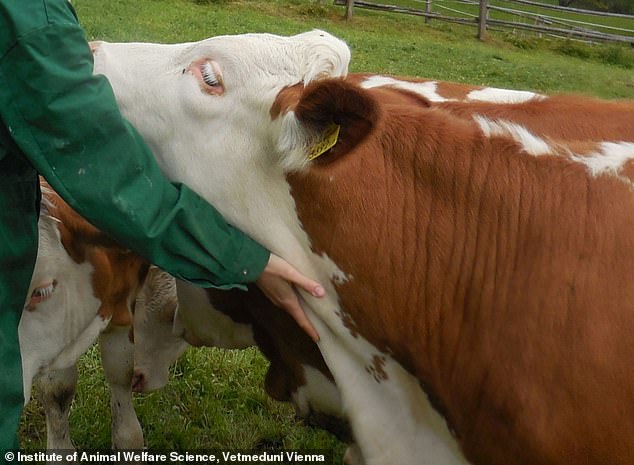 The perception of different touching and talking likely plays a role in cows’ ’emotional experience’, but studies into this so far have been scarce.

The experts therefore worked with a herd of 28 cattle, comparing the benefits of either stroking the animals while playing a recording of an experimenter’s voice (‘playback’), or stroking while speaking to the animals directly (‘live’).

All tests were video recorded and analysed for cow behaviours, while the effects on the cows’ cardiac parameters were also assessed.

After monitoring the animals’ responses during the experiments, they found ‘live’ talking was the best mood enhancer for their bovine friends.

Heart rate variability (HRV) was higher when cattle were spoken to directly, indicating they were enjoying themselves. 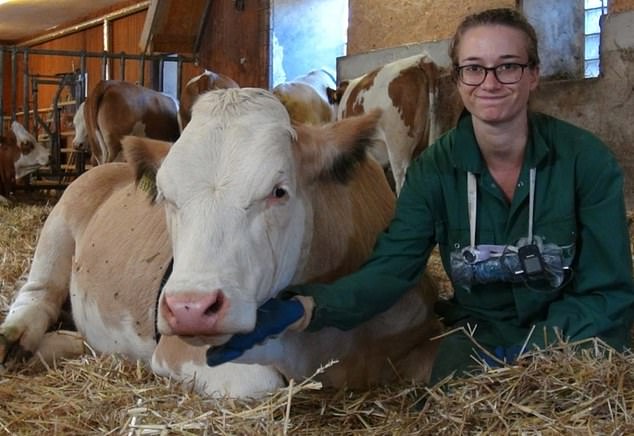 Lange with her study participants. She said the use of recorded auditory stimuli to promote positive states for cows ‘is possible, but not necessarily preferable’

HRV determines time between each beat and how it varies, and a greater HRV at rest is generally an indicator of better wellbeing.

‘HRV is also related to emotional states. Different patterns in HRV can indicate which parts of their nervous system is more active – are they more in a fight-or-flight or in a rest-and-digest kind of state?

‘Certain patterns allow us to assume that the cows perceive the stroking and talking as positive and relaxing.’

The team also observed some behavioural characteristics that were indicators of relaxation.

‘When relaxed and enjoying the interaction, the animals will often stretch out their necks as they do when they groom each other,’ said Lange.

‘Additionally, it is thought that ear positions may indicate mood – hanging ears and low ear positions appear to be linked to relaxation.’

Lange and her team concluded the use of recorded auditory stimuli to promote positive states for cows ‘is possible, but not necessarily preferable’. 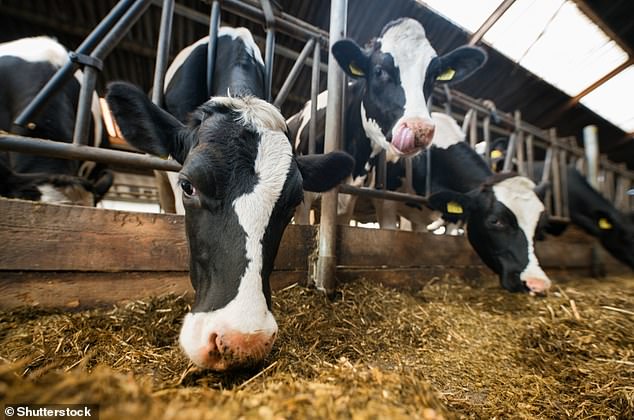 Cattle ‘like stroking in combination with gentle talking’, according to the researchers. Other studies have showed that cows that are less fearful of humans also have better productivity

The experiment included only one herd and one playback recording, the team admitted.

Lange has therefore called for further research to see if results are also valid for different herds and situations, such as with cows that are more fearful of humans.

This will help in further studies on the improvement of cattle-human relationships, which is an important aspect of animal welfare.

Cattle stress triggers a fight-or-flight reaction that produces a chemical response, which itself causes the animals’ muscles to tense.

Whooping and hollering, aggressive animals like dogs, travel and cattle prods are all sources of cattle stress.

The research has been published in Frontiers in Psychology.

In September 2020, scientists reported the creation of the first gene-edited livestock that can produce sperm with the traits of donor animals, allowing them to act as ‘surrogate sires’.

The breakthrough could result in ‘elite’ offspring that are bigger, healthier and meatier, helping to meet the food demands of a growing global population.

The technique was developed by researchers from Washington State University and Edinburgh University’s Roslin Institute, which is famous for creating the world’s first cloned mammal, Dolly the Sheep.

It involves breeding sterile male animals and then transplanting stem cells from donor animals into their testes, causing them to produce sperm that only carries the genetic material of the selected donor.

Project leader Professor Jon Oatley said the new technique could improve the efficiency of food production – or even save species from extinction.

‘With this technology, we can get better dissemination of desirable traits and improve the efficiency of food production,’ said Professor Oatley.

‘This can have a major impact on addressing food insecurity around the world.

‘If we can tackle this genetically, then that means less water, less feed and fewer antibiotics we have to put into the animals.’

The study was detailed in the journal Proceedings of the National Academy of Sciences.