Temperatures in Antarctica may have hit another all-time high

Scientists from Brazil say that temperatures in Antarctica have surpassed 20.7C (68F) Celsius for the first time on record.

The record-setting temperatures, measured on Seymour Island this week and first reported by The Guardian, come just six days after similarly record breaking temperatures at an Argentinian research station at Esperanza which recorded a temperature of 18.3C.

While the temperatures have yet to be confirmed with the World Meteorological Organization, they reflect a broader trend throughout the rest of the region which have warmed by 3C (5.4F) over the past 50 years, according to the WMO. 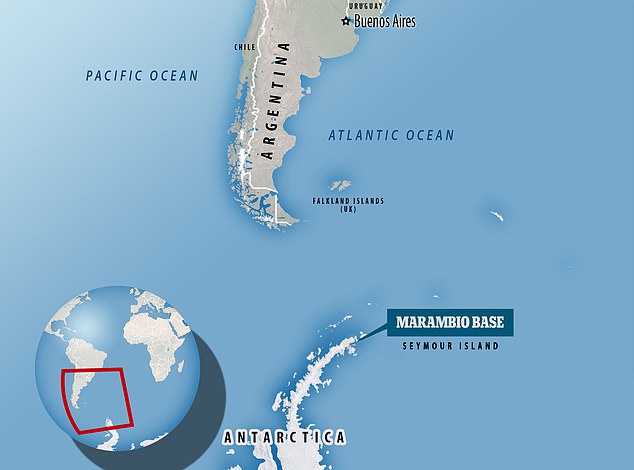 At the Marambio Base on Seymour Island in Antarctica, Brazilian scientists say they recorded temperatures of 21.7C which breaks a record for the region set just a week ago

‘We are seeing the warming trend in many of the sites we are monitoring, but we have never seen anything like this,’ Carlos Schaefer, one of the scientists who works on the base told The Guardian.

Scientists say that the temperatures are likely influenced by El Niño events which have brought warm fronts to the region in addition to climate change.

Sweltering temperatures in Antarctica mirror revelations that January was the hottest month on record across the globe.

According to the National Ocean and Atmospheric Administration, last month was the warmest January in 141 years of climate records.

Record-warm temperatures were found in a range of country across the globe including Scandinavia, Asia, the Indian Ocean, the central and western Pacific, the Atlantic and Central and South America.

Land and ocean surface temperature was also the highest on record at 2.05 degrees Fahrenheit above the 20th-century average – surpassing the last record of 0.04 degrees set in 2016. 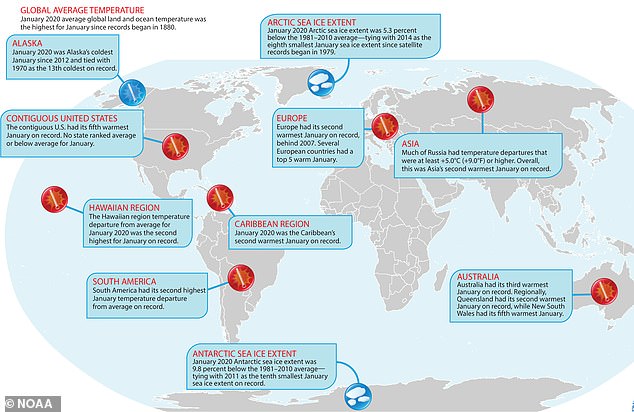 NOAA determined record-warm temperatures last month all over the globe including Scandinavia, Asia, the Indian Ocean, the central and western Pacific, the Atlantic and Central and South America. Land and ocean surface temperature was also the highest on record at 2.05 degrees Fahrenheit above the 20th-century average

As oceans and atmospheric temperatures warm, Antarctica has born the brunt, especially Pine Island which is its most vulnerable glacier and is the single largest contributor to sea level rise of any ice stream in the world.

Since 2012, the glacier has been shedding 58 billion tons of ice a year.

Pine Island has been tracked for around 30 years and over this time it has seen its shape and position dramatically alter.

With each passing calving, the buttressing force of the glacier weakens and threatens to break, increasing the flow of ice from the land to the ocean.

WHAT WOULD SEA LEVEL RISES MEAN FOR COASTAL CITIES?