The largest ozone hole ever documented above the North Pole has closed almost as quickly as it formed.

The hole formed earlier this year and reached its maximum size in March some 11 miles above the surface of the Earth.

It was the largest ozone hole ever documented over the Arctic, beating the previous record holder, which was observed during the 2011 winter. 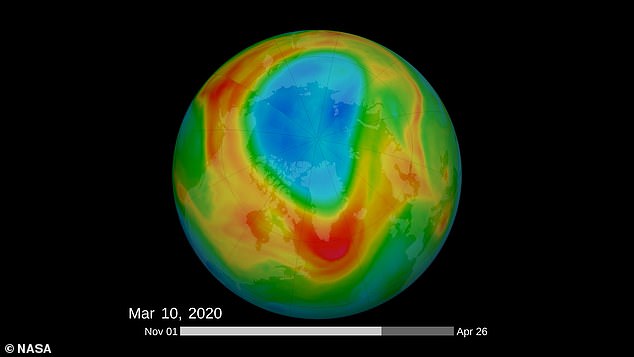 The largest hole ever documented above the Arctic, which was observed in March, has closed against a matter of weeks after it was first made public

Researchers with Copernicus’ Atmospheric Monitoring Service believed the hole was caused by an unusually strong polar vortex, which explained its relatively sudden growth, according to a report in CNN.

The polar vortex is a high altitude current that circulates in an irregular ring-like pattern around the Arctic and helps keep cold air trapped above the pole.

When temperatures drop to a low enough point, polar stratospheric clouds (PCS) can form, which can in turn activate ozone-depleting chemicals like chlorine in the atmosphere.

On average, temperatures above the Arctic aren’t quite as cold as those above Antarctica, which makes the seasonal appearance of ozone holes in the north rare, while it is a yearly phenomenon in the south.

‘It is very unusual for such strong ozone depletion to occur in the northern hemisphere, but this year’s polar vortex was exceptionally strong and persistent, and temperatures were low enough to allow stratospheric cloud formation for several months,’ Copernicus’ Antje Inness told Euro News.

Ozone helps filter ultaviolet light from the atmosphere, and when holes appear it means more harmful solar radiation is penetrating the atmosphere and reaching the Earth’s surface.

Some suggested the rapid disappearance of the ozone hole might have been caused by the radical reductions in air pollution during the worldwide COVID-19 shutdowns but the CAMS team have rejected the idea.

‘COVID19 and the associated lockdowns probably had nothing to do with this,’ the group wrote in a Twitter post.

‘It’s been driven by an unusually strong and long-lived polar vortex, and isn’t related to air quality changes.’ 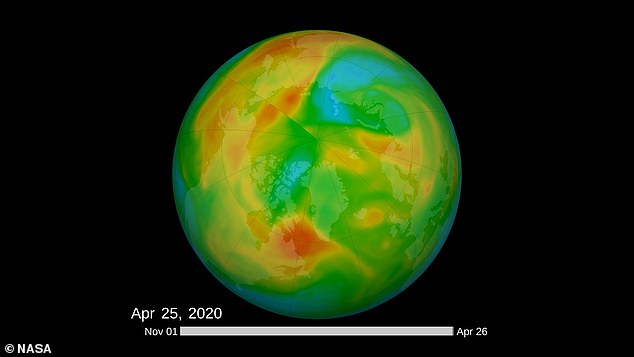 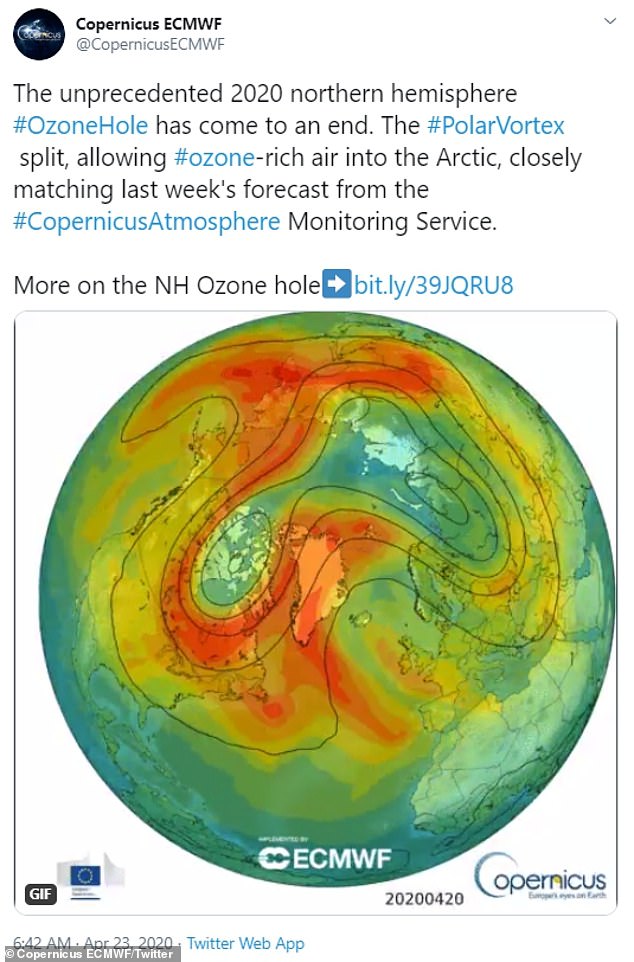 According to researchers at Copernicus’ Atmospheric Monitoring Service, Arctic temperatures in April were as much as 36 degrees Fahrenheit above their normal levels, causing the polar vortex to break up into two smaller vortices

Just as the hole rapidly formed due to unusually cold polar vortex, the team say its disappearance is likely a result of the polar vortex warming, which causes it to begin mixing with ozone-rich air from the lower atmosphere, offsetting the temporary depletion.

While the winter months may have helped drive the polar vortex to unusually low temperatures, the team hole’s dissipation has been driven by what researchers decribe as a ‘heat wave’ with temperatures as much as 36 degrees Fahrenheit warmer than usual.

The heat has already caused the polar vortex to shrink so rapidly that it’s broken apart into two smaller and separate vortices.

WHAT IS THE OZONE LAYER?

Ozone is a molecule comprised of three oxygen atoms that occurs naturally in small amounts.

In the stratosphere, roughly seven to 25 miles above Earth’s surface, the ozone layer acts like sunscreen, shielding the planet from potentially harmful ultraviolet radiation that can cause skin cancer and cataracts, suppress immune systems and also damage plants.

It is produced in tropical latitudes and distributed around the globe.

Closer to the ground, ozone can also be created by photochemical reactions between the sun and pollution from vehicle emissions and other sources, forming harmful smog.

Although warmer-than-average stratospheric weather conditions have reduced ozone depletion during the past two years, the current ozone hole area is still large compared to the 1980s, when the depletion of the ozone layer above Antarctica was first detected.

In the stratosphere, roughly seven to 25 miles above Earth’s surface, the ozone layer acts like sunscreen, shielding the planet from potentially harmful ultraviolet radiation

This is because levels of ozone-depleting substances like chlorine and bromine remain high enough to produce significant ozone loss.

In the 1970s, it was recognised that chemicals called CFCs, used for example in refrigeration and aerosols, were destroying ozone in the stratosphere.

In 1987, the Montreal Protocol was agreed, which led to the phase-out of CFCs and, recently, the first signs of recovery of the Antarctic ozone layer.

The upper stratosphere at lower latitudes is also showing clear signs of recovery, proving the Montreal Protocol is working well.

But the new study, published in Atmospheric Chemistry and Physics, found it is likely not recovering at latitudes between 60°N and 60°S (London is at 51°N).

The cause is not certain but the researchers believe it is possible climate change is altering the pattern of atmospheric circulation – causing more ozone to be carried away from the tropics.

They say another possibility is that very short-lived substances (VSLSs), which contain chlorine and bromine, could be destroying ozone in the lower stratosphere.

VSLSs include chemicals used as solvents, paint strippers, and as degreasing agents.

One is even used in the production of an ozone-friendly replacement for CFCs.