The colour changing gradient illusion that can ‘break your brain’

The color changing gradient illusion that can ‘break your brain’

A Japanese psychologist has stumped the internet with his latest optical illusion.

Akiyoshi Kitaoka, a psychology professor at Ritsumeikan University in Japan, shared a video of a piece of paper with a black-to-white gradient on it.

In the video, he slides a grey-colored swatch across the gradient, as it mysteriously changes colors right before viewers’ eyes.

Viewers might be inclined to believe that he doctored the video to hide that he used several different-colored swatches.

HOW DOES THE GRADIENT ILLUSION WORK?

Psychologist Akiyoshi Kitaoka is known for his mind-bending illusions.

In the video, he can be seen sliding a grey box across a gradient box. As he does this, the box appears to change colors.

In reality, the box is the same color the entire time.

The reason why our eyes perceive it to change colors is due to a phenomenon called lightness perception.

Put simply, our eyes perceive colors differently based on the shade of the object in the background or foreground.

However, the swatches are all the same color.

There’s also a simple scientific explanation for why the swatch appears to change colors as Kitaoka slides it across the gradient background.

The effect is a result of lightness perception, or the concept that our eyes perceive colors differently based on the shade of whatever object is in the background or foreground.

Put simply, if there is a bright background, objects in the foreground will appear darker.

Likewise, if the background is dark, objects in the foreground will appear lighter.

Other factors, such as the amount of light reflected by a surface, the orientation of the surface and whether or not it’s 3D can produce similar affects. 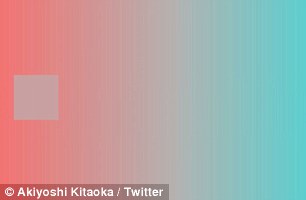 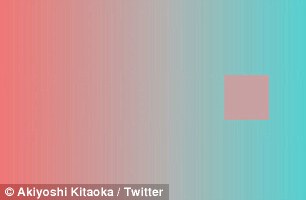 The effect is a result of lightness perception, or the concept that our eyes perceive colors differently based on the shade of whatever object is in the background or foreground 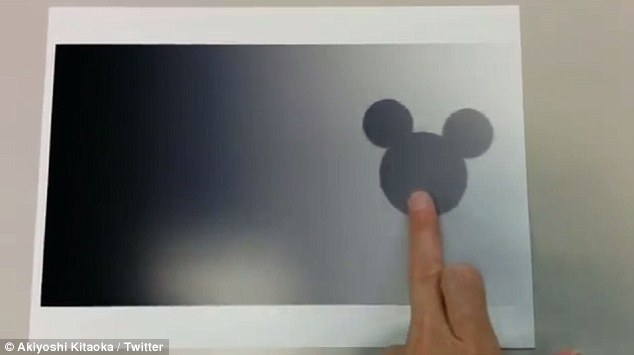 Two University of Washington professors described this phenomenon in a 2014 research paper.

‘The amount of light reflected by a surface is affected by a combination of factors including the surface’s reflectance properties and illumination conditions. 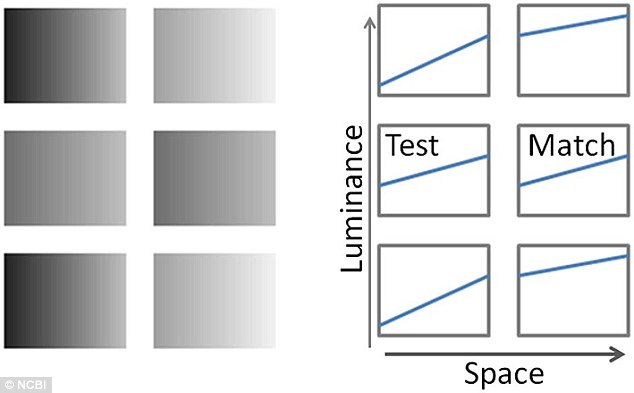 Other factors, such as the amount of light reflected by a surface, the orientation of the surface and whether or not it’s 3D can affect our lightness perception of a given image

Optical illusions arrange a series of patterns, images and colors or play with the way an object is lit in order to trick our brains into thinking something is there – when it is not.

When light hits our retina, it takes about one-tenth of a second for our brain to translate that signal into perception, reports Discovery News.

Evolutionary neurobiologist Mark Changizi says this neural delay makes our brains generate images of what it thinks the world will look like in one-tenth of a second.

‘The latter are not limited by the strength of illuminant but also include the relative placement of the light illuminating the surface, the orientation of the surface and its 3d shape, all of which result in a pattern of luminance gradients across the surface,’ they wrote.

Kitaoka replicated the same effect in a few other videos, including one that shows a pair of Mickey Mouse ears sliding across the gradient, instead of squares.

He also demonstrated it on a colored gradient.

Several Twitter users attempted to blow the lid off of Kitaoka’s demos by swatching the colors shown in a separate computer program. 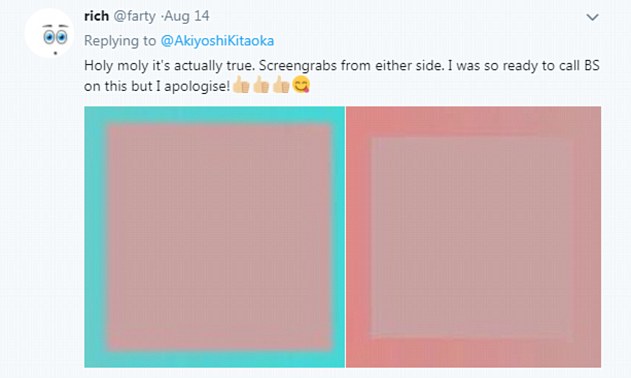 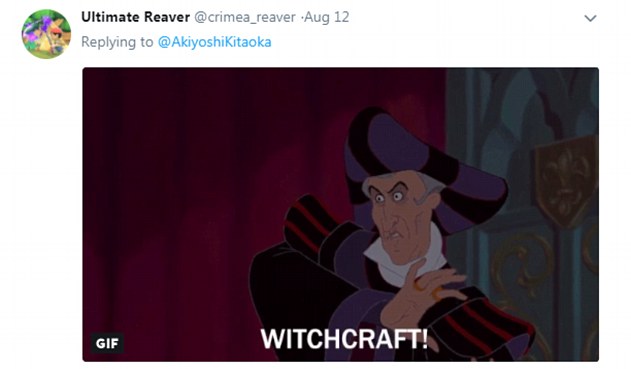 To their surprise, the swatch stayed the same shade throughout the video.

It only added to the mystique around how Kitaoka was able to achieve the optical illusions shown in his videos.

Kitaoka has created numerous other popular optical illusions, like the ‘rotating snakes’ illusion.