Follow
Home » Science » There is no such thing as 'he's just not my type', scientists say

There is no such thing as 'he's just not my type', scientists say

There is no such thing as ‘he’s just not my type’: Scientists say singletons ‘might as well let a stranger pick their dates’ because they don’t really know what they want in a romantic partner

Scientists say online daters and singletons ‘might as well let a stranger pick their dates’ because they don’t really know what they want in a romantic partner.

Singletons often become so romantically interested in prospective matches that they convince themselves that their date does possess the traits they deem most desirable.

A person’s ideal partner does not reflect ‘any unique personal insight’ of tastes, researchers say – and when we say what we like in a partner we’re actually just describing qualities that everyone likes.

The research could help shift online dating away from a model that focuses on stringently matching profiles and attributes. 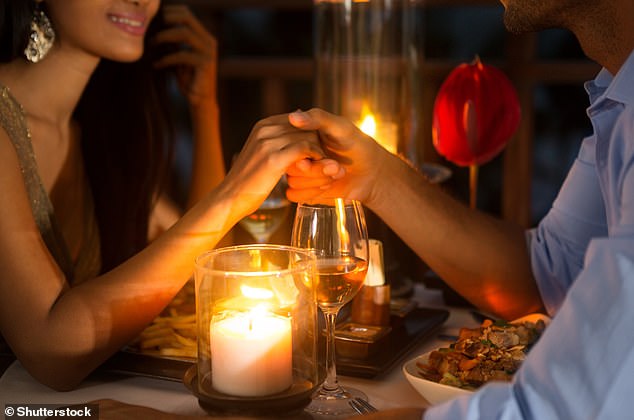 We all can describe our ideal partner, but researchers question whether we actually have ‘special insight into ourselves’ when describe the attributes we like

Dating apps should instead become more spontaneous and try to recreate a blind date experience online – or one that relies on a third party to provide a match.

‘It’s really easy to spend time hunting around for someone who seems to match your ideals,’ said Jehan Sparks, former UC Davis doctoral student and lead author of the study.

‘But our research suggests an alternative approach – don’t be too picky ahead of time about whether a partner matches your ideals on paper.

‘Or even better, let your friends pick dates for you.’

For the study, more than 700 participants nominated their top three ideas in a romantic partner – attributes including ‘funny’, ‘attractive’ or ‘inquisitive’.

They then reported their romantic desire for people they knew personally.

Some of these people were blind date partners, other were romantic partners and others were just friends.

Overall, participants were sufficiently romantically interested in blind dates, acquaintances, friends and romantic partners to the extent that they thought those individuals possessed their three ideal attributes.

Each participant also considered the extent to which the same personal acquaintances possessed three attributes nominated by some other random person in the study.

Researchers found that romantic interest for a participant correlated with these attributes, picked by a random person.

‘So in the end, we want partners who have positive qualities, but the qualities you specifically list do not actually have special predictive power for you,’ said Sparks.

The authors take these findings to mean that people don’t have special insight into what they personally want in a partner.

‘The people in our study could very easily list their top three attributes in an ideal partner,’ said Sparks.

‘We wanted to see whether those top three attributes really mattered for the person who listed them.

People commonly spend hours perusing online dating profiles in the search of someone who specifically matches their ideal criteria – but this effort may be in vain.

Researchers compared the experience to ordering food from a restaurant.

‘Why do we order off the menu for ourselves?’ said study co-author Professor Paul Eastwick at UC Davis. ‘Because it seems obvious that I will like what I get to pick.

‘Our findings suggest that, in the romantic domain, you might as well let a random stranger order for you – you’re just as likely to end up liking what you get.’

However, the findings may not apply to singletons who are particularly picky about certain physical and emotional attributes – akin to a picky eater or someone with an allergy in Professor Eastwick’s restaurant analogy.

The research paper has been published in the Journal of Experimental Psychology.

HOW DID ONLINE DATING BECOME SO POPULAR?

The first ever incarnation of a dating app can be traced back to 1995 when Match.com was first launched.

The website allowed single people to upload a profile, a picture and chat to people online.

The app was intended to allow people looking for long-term relationships to meet.

eHarmony was developed in 2000 and two years later Ashley Madison, a site dedicated to infidelity and cheating, was first launched.

In 2012, Tinder was launched and was the first ‘swipe’ based dating platform.

After its initial launch it’s usage snowballed and by March 2014 there were one billion matches a day, worldwide.

In 2014, co-founder of Tinder, Whitney Wolfe Herd launched Bumble, a dating app that empowered women by only allowing females to send the first message.

The popularity of mobile dating apps such as Tinder, Badoo and more recently Bumble is attributable to a growing amount of younger users with a busy schedule.

In the 1990s, there was a stigma attached to online dating as it was considered a last-ditch and desperate attempt to find love.

This belief has dissipated and now around one third of marriages are between couples who met online.

A survey from 2014 found that 84 per cent of dating app users were using online dating services to look for a romantic relationship.

Twenty-four per cent stated that that they used online dating apps explicitly for sexual encounters.