A meteoroid that grazed the night sky over Australia in 2017 took a very unusual path away from Earth. 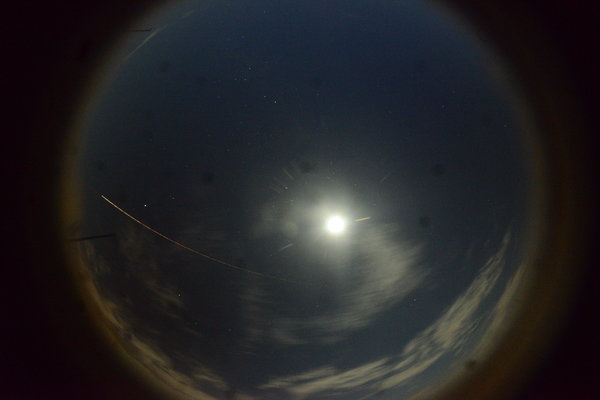 It’s not unusual for meteors to illuminate night skies over south-western Australia’s desolate landscapes. But the fireball of July 7, 2017, was different. For a full minute and a half, it just kept burning and burning and burning. The object carved a trace of light as wide across as Texas, then faded.

Many meteors disintegrate in our atmosphere, or slow down and crash into the soil. But after its light show, this one kept going, departing our planet with a celestial “thanks, but no thanks.”

Next stop: Jupiter, at the beginning of 2025. And after tangling with that giant planet’s gravity, it will most likely be ejected into interstellar space, said Patrick Shober, a graduate student at Curtin University in Western Australia who led a team that studied the event.

The July 2017 event is known as a grazing fireball, a rare type of meteoroid that hits Earth’s atmosphere at a low angle, then skims like a skipping stone on a lake.

Some are legendary, like 1783’s Great Meteor, which streaked past England and over continental Europe, or the incorrectly named Great Comet of 1860, painted by the Hudson River School artist Frederic Church and inspired a poem by Walt Whitman. The first grazing fireball to be studied by modern science zipped over North America for 101 seconds in 1972.

But few spend this long dipping into the atmosphere. And not one has ever been as well studied. It might have gone unseen if not for the Desert Fireball Network, a set of observatories that span a vast, sparsely populated swath of Australia.

The network’s goal is to fetch meteorites that land in the desert. “We see a lot of things that people don’t see because we put the cameras in places where we can find the rock,” Mr. Shober said. But in this case, there was nothing to retrieve.

His team estimates the rock responsible for the event entered the atmosphere weighing 130 pounds and measuring only about a foot across. But it blazed so brightly for so long because it traveled on a shallow path and moved at a blistering pace of about 10 miles per second. Near its lowest point, still about 36 miles above the surface of the Earth, a chunk broke off and burned up.

By triangulating its trajectory from multiple positions, Mr. Shober traced the fireball back to the asteroid belt between Mars and Jupiter, his team reports in a paper that will be published by The Astronomical Journal. As it reached Earth, the planet gave it an extra kick.

“It gained orbital energy from the close encounter the same way a space mission might use a slingshot maneuver,” he said, referring to the orbital navigations NASA and other space agencies use to speed robotic probes toward their destinations.

That sent it careening toward Jupiter, giving it an elongated, outbound orbit more like a comet’s than an asteroid’s. Its path interests astronomers, who can’t study anything this small through a telescope.

The interplanetary rock-passing routes that astronomers usually study “are like American football: Neptune to Uranus, Uranus to Saturn, and then to Jupiter, and they’re sort of passing things forward,” said Erin Ryan, a planetary astronomer at the SETI Institute in California who was not involved in the study. “But in this case, it’s kind of more like rugby, where everything is getting passed backwards.”

Mr. Shober, who is now working to understand just how often our planet might assist in these passes, said the same interplanetary rerouting might also occur around Mars, Venus and Mercury.

As for the Australian meteoroid, his simulations suggest that repeated encounters with Jupiter will most likely have kicked it out of the solar system within half a million years.

That leaves astronomers waiting for the next grazing fireball. They’re adding more eyes to the hunt with a newly formed Global Fireball Observatory that knits together the effort in Australia with projects elsewhere. Cameras will soon be scanning the skies over 2 percent of the world’s surface.

“It will be interesting to see how many more of these they get,” Dr. Ryan said.