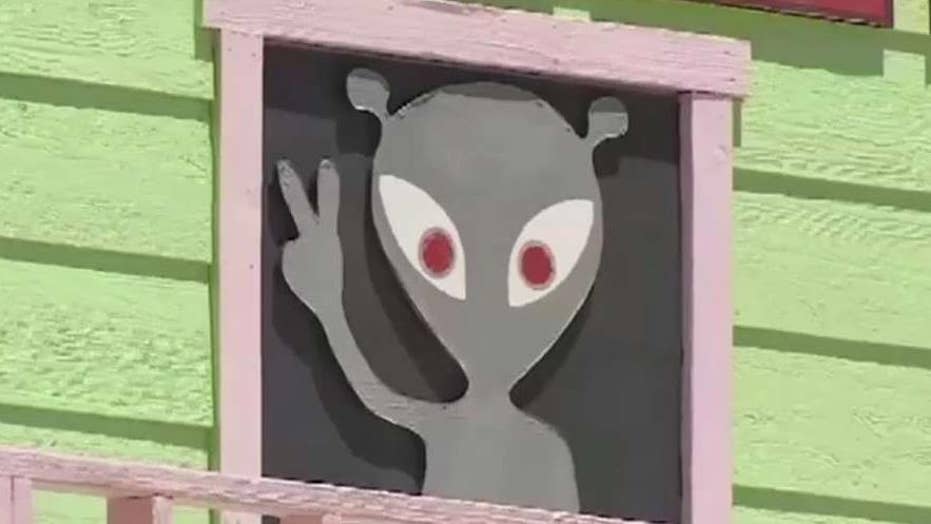 Nye County, Nevada says they are ‘preparing for the worst’ ahead of the event.

LAS VEGAS – The small town of Rachel, Nevada, located in the middle of the desert and home to only about 50 people, could be flooded with thousands of people this coming weekend after the joke Facebook post to storm Area 51 – the top-secret military base that conspiracy theorists believe houses aliens – went viral.

“AlienStock,” one of three festivals that emerged from the joke-calls to raid Area 51, is slated to take place at the aptly named Little A’Le’Inn in Rachel.

Despite the potential crowds, a co-owner of the inn, Connie West, said she wanted to quash any comparisons to the infamous Fyre Festival.

“I'm providing security for the community as well, not just for the festival,” she added. “Almost $31,000 just for the medical to be here.”

Samuel Sheller, the CEO of Guardian Elite Medical Services, told Fox News the company indeed had a contract with West and will be providing 24-hour ambulance coverage in Rachel with at least four personnel on-site at any given time.

Lincoln County officers told Fox News they’ll be staffing the event in Rachel and another gathering east of there, in Hiko, but the sheriff did not return Fox News’ phone call for specific details.

Comparisons between AlienStock and Fyre Festival — the fraudulent event that left thousands stranded on a remote island with no infrastructure or resources – started to surface after the creator of the viral Facebook page, “Storm Area 51, They Can’t Stop All of Us,” backed out last week over safety concerns.

Roberts said he created the Facebook page in July after listening to a Joe Rogan podcast with Bob Lazar – the scientist who claimed he worked at Area 51 – got him thinking about the mystery surrounding it.

“We will all meet up in rural Nevada and coordinate our parties,” the post read. “If we Naruto run, we can move faster than their bullets. Let’s see them aliens.”

Ultimately, millions of people pledged to help uncover the government’s most coveted secrets.

“Dude, it's wild,” Roberts told Fox News. “It got to the point where I was like, ‘Come on guys, I mentioned Naruto running in the post. It's not that serious.’”

Roberts added that he’s said it’s “a joke on the Internet probably like 50 thousand times at this point.”

When the post started gaining traction, West was approached by the band Wily Savage out of Los Angeles to host a small music festival at her motel. Around the same time, Roberts met with West about joining forces and creating a big party in the desert that he dubbed AlienStock, with thousands of people expected to flood Rachel.

“We drove all the way out to the Nevada desert,” Roberts said. “We actually did check out the Alien Research Center, but we drove straight past into Rachel and we talked to the Little A’Le’Inn and to Connie West and that's when we decided to move forward with AlienStock.”

West agreed and the pair moved forward together to put on the festival, with Wily Savage helping bring in musicians.

However, on Sept. 9, Roberts unexpectedly backed out of the event at the Little A’Le’Inn and moved the music festival to the Downtown Las Vegas Center over fears of a “FYRE FEST 2.0.”

“Due to the lack of infrastructure, poor planning, risk management and blatant disregard for the safety of the expected 10,000+ AlienStock attendees, we decided to pull the plug on the festival,” a statement from Roberts read. “We foresee a possible humanitarian disaster in the works, and we can’t participate in any capacity at this point.”

“People are coming and now they're coming even harder in support,” she told Fox News. “We're going to have the best party we can possibly have. We have a stage being built. We have the infrastructure that is coming in.”

The disagreements between the two sides took place at a meeting over the weekend of Sept. 7, with Roberts’ promoter, Frank DiMaggio, telling Fox News logistical concerns emerged over lack of infrastructure and safety.

“We found out the exact information that we were expecting, we were just hoping it was going to be good news and it was actually worse than we thought — all the way down to misappropriation of money, money disappearing,” DiMaggio said. “When that happens with being in this business, you run as far away from it as you can. These kids didn't know what they were getting into.”

West argued Roberts and his friend were in charge of bringing additional infrastructure, as well as food and drinks, but she was left on the hook when they pulled out.

“There has not been a penny from those boys,” West told Fox News. “I have no more money. I put my house up. I put my house up because they hadn’t got their sponsorship money yet and I had to get these things locked in.”

Members of Roberts’ team disputed any discrepancy involving sponsorships, arguing they couldn’t dictate when a sponsor would transfer money.

West also claimed none of the money from the parking spots sold for the festival would go to her, but rather to the landowners who offered up their lots.

“It’s supposed to be split between them,” she added. “The money doesn't go to me.”

Roberts initially had inquired about holding his event at the Alien Research Center in Hiko.

“Matty Roberts was involved with us early on and then not long before we were going to announce this event, he announced AlienStock which is the event down in Rachel,” said Keith Wright, the executive producer for the Storm Area 51 Base Camp – the third event spurred by the Facebook post set to take place this weekend.

Wright said Base Camp, geared toward the “true believers,” will feature speakers including Jeremy Corbell, a documentary filmmaker exploring the realm of real-world mysteries such as UFOs.

He added that Roberts pulling out left a “pretty bad taste in the mouth of a lot of people in this community and this county.”

DiMaggio said the decision to move venues wasn’t made lightly, but ultimately stemmed from a safety standpoint.

“If they’re stuck in traffic and they can’t use their cell phone, what happens?  What if you have a heart attack? Who’s going to call the paramedics that might be 10 miles down the road because you’re stuck?” he asked, adding that “Vegas is where they’re ready for anything here.”

Hiko and Rachel are located in the middle of the desert with very limited resources, including spotty cell service. “It's about as remote as you can get,” Wright acknowledged.

Some people living in the area also expressed fear about the expected influx of thousands, telling Fox News there wouldn’t be enough law enforcement to take care of them all.

“It’s ridiculous,” one person who has lived in Rachel for 30 years and requested to remain anonymous — since everyone seems to know everyone in the town — told Fox News. “You have this little place in the middle of nowhere with 50 people in it, and all of a sudden, 10,000 people are going to show up or more… they will run out of water, run out of food, gasoline, and they’ll be some idiots who try to do stuff they shouldn’t be doing.”

Among the lingering questions: how many people will actually show up? Just like what’s lurking behind the gated fence into Area 51… nobody really knows.

But, West said Rachel would be prepared for anything and one thing was certain, “this thing is still happening.”

She added, “I mean, in the biggest way this is a showcase of what can be done with a few little people in a little tiny place.”

Could, flood, Ne, Rural, THOUSANDS
You may also like:

The US plans to force passengers to change routes, and potentially redirect entire flights, to make sure they get screened for the Wuhan virus