A miniature lizard which roamed what is now Madagascar around 240million years ago has been discovered by researchers who say it was just four inches (10cm) tall.

This minuscule creature is believed to be an ancestor of much larger dinosaurs and pterosaurs.

Named Kongonaphon kely – or ‘tiny bug slayer’- it was smaller than a sparrow and had teeth for chomping on insects, sharp claws on its feet and bristles.

It was unearthed on Madagascar and is a ‘missing link’ in the history of vertebrates, say the team from the North Carolina Museum of Natural Sciences.

The remains of Kongonaphon were actually discovered in 1998 but were found with so many other fossils it has taken scientists this long to understand its importance. 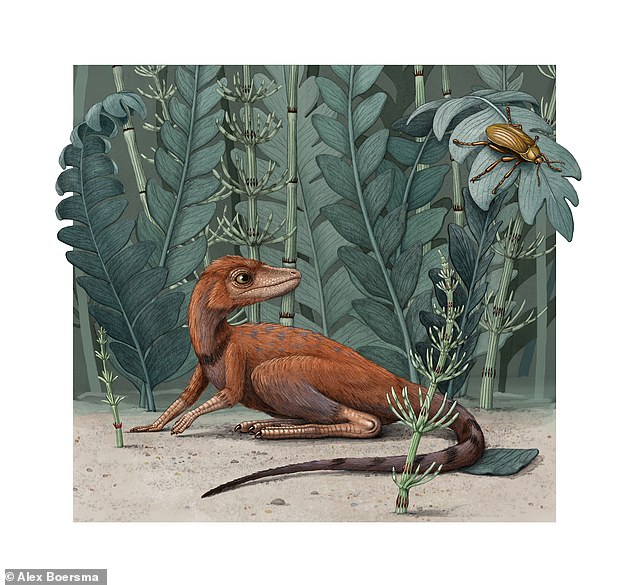 Life restoration of Kongonaphon kely , a newly described reptile near the ancestry of dinosaurs and pterosaurs, in what would have been its natural environment in the Triassic

Picture, a graphic showing a size comparison between the newly-discovered species (middle) and a known early dinosaur, the Herrerasaurus (right) and an average-sized man (left)

‘But this new animal is very close to the divergence of dinosaurs and pterosaurs – and it’s shockingly small,’ he said.

Some dinosaurs were over 100 feet long and weighed over 100 tons and ptterosaurs, their close airborne cousins, were the largest animals to ever fly.

Some were as a modern plane, with a wingspan reaching up to 35 feet (10m).

Both these ancient groups of reptiles belong to the group Ornithodira, but their origins have remained a mystery thanks to very few fossils of their earlier relatives.

That was until an archaeological dig led to the discovery of Kongonaphon, the tiny lizard that shared key features with its bigger cousins.

The study published in Proceedings of the National Academy of Sciences has implications for the evolution of birds, the living descendants of dinosaurs.

It may help explain the origins of feathers and why pterosaurs took to the skies in the first place, said the North Carolina research team.

The findings also shed light on the presence of ‘fuzz’ on the lizard species skin.

Expedition leader Professor John Flynn, of the American Museum of Natural History, New York, explained that the site in southwestern Madagascar where the fossil was unearthed comes from a poorly known time interval globally.

‘This tiny specimen was jumbled in among the hundreds we’ve collected from the site over the years,’ said Flynn.

‘It took some time before we could focus on these bones, but once we did, it was clear we had something unique and worth a closer look.

‘This is a great case for why field discoveries – combined with modern technology to analyse the fossils recovered – is still so important.’

The remarkably preserved specimens included parts of Kogonaphon’s skull and limbs which enabled an accurate reconstruction of its appearance.

They were dated to around 237 million years old – when the exotic African island was part of the supercontinent Pangaea and the first dinosaurs were emerging. 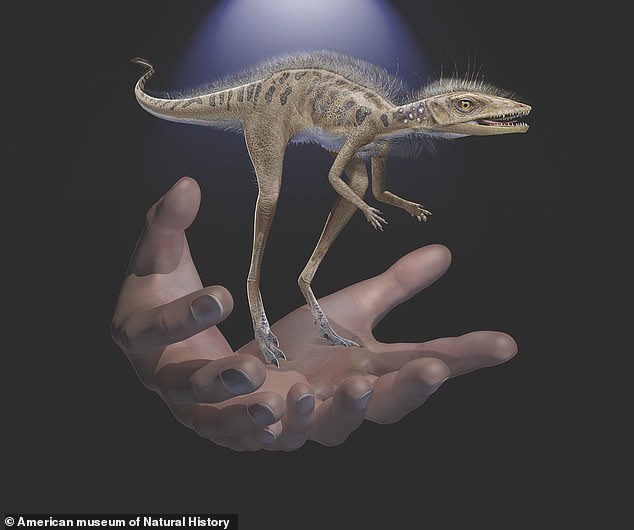 Life restoration of Kongonaphon kely , a newly described reptile near the ancestry of dinosaurs and pterosaurs, shown to scale with human hands

Body size comparison between the newly discovered Kongonaphon and one of the earliest dinosaurs, Herrerasaurus

‘Recent discoveries like Kongonaphon have given us a much better understanding of the early evolution of ornithodirans,’ he said.

‘Analysing changes in body size throughout archosaur evolution, we found compelling evidence it decreased sharply early in the history of the dinosaur-pterosaur lineage.’

The study found that giant dinosaurs, which went extinct around 66 million years ago, originated from extremely tiny ancestors.

The fossil also yielded more details about the specimen’s life. Researchers believe signs of wear on its teeth are evidence it ate insects.

A shift to an insectivore lifestyle – linked to small body size – may have helped early ornithodirans survive as the world changed and they needed to find a new niche.

They occupied a different niche to their mostly meat-eating peers – meaning they would not have been rivals, the team explained.

And fuzzy skin coverings – from simple filaments to feathers – that were common in dinosaurs and pterosaurs may have started in Kongonaphon for thermo-regulation.

Heat retention in small bodies is difficult and the mid-late Triassic was a time of temperature extremes – with sharp shifts between hot days and cold nights.

Project co-leader Lovasoa Ranivoharimanana, a vertebrate expert from the University of Antananarivo in Madagascar. said this was a very important discovery.

‘Discovery of this tiny relative of dinosaurs and pterosaurs emphasises the importance of Madagascar’s fossil record for improving knowledge of vertebrate history during times that are poorly known in other places.’

Some 251 million years ago, at the end of the Permian period, a mass extinction wiped out most of life on Earth.

In its wake arose a group of egg-laying reptile pre-cursors called archosaurs, the common ancestors of dinosaurs, flying reptiles known as pterosaurs and crocodiles.

At some point during the next period, the Triassic, pterosaurs and dinosaurs split off from the crocodile lineage. Kongonaphon is another piece in the jigsaw.

4-inch, dinosaur, rela, tall, tiny
You may also like: