Tiny microplastic particles can be absorbed through plant roots and end up in the wheat and vegetables we eat, study shows

Particles produced from plastic waste are being absorbed through plant roots and end up in the wheat and vegetables that we eat, a new study finds.

A team from the Chinese Academy of Sciences studied the prevalence of microplastics – produced when things like water bottles degrade.

This source of pollution has previously been found throughout the ocean and other aquatic ecosystems, and even in our seafood and salt, according to researchers.

Microplastics have become ubiquitous and this has led to concern among scientists about the transfer of the particles from the environment and into our food chain.

In a new study, researchers found these plastic pieces had contaminated edible plants regularly eaten by humans – suggesting no food is free from plastic pollution. 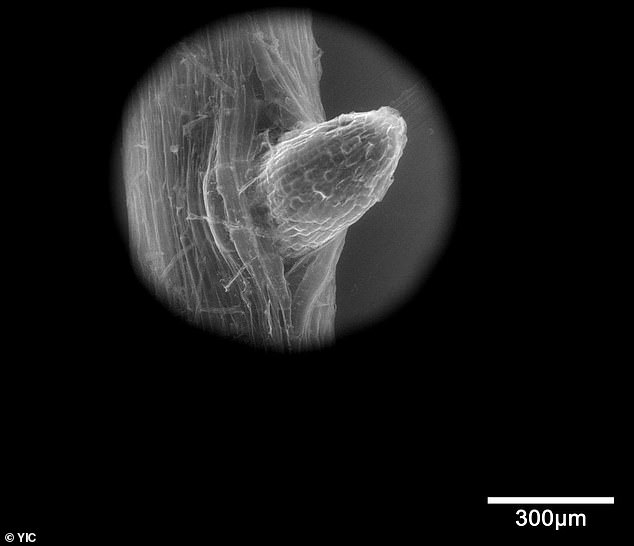 Large gaps between epidermal cells at the site of lateral root emergence. In a new study, researchers found these plastic pieces had contaminated edible plants including vegetables regularly eaten by humans

Yongming Luo, a professor at the Yantai Institute of Coastal Zone Research (YIC) and the Nanjing Institute of Soil Science said the plastic could pose a health risk.

He said most microplastics are emitted to the environment and accumulate in large amounts of soil with secondary particles found by the degradation of plastics.

This soil, plus wastewater – a vital source of water for agricultural irrigation – contain small-sized microplastics that are entering our food supply every day.

Despite the prevalence of microplastics throughout the environment, the matter of their uptake by crop plants had not been well studied until now.

For decades, scientists believed that plastic particles were simply too large to pass through the physical barriers of intact plant tissue – that isn’t the case.

‘Cracks at the emerging sites of new lateral roots of lettuce and wheat crops can take in microplastics from the surrounding soil and water.

‘Those microplastics can then be transferred from the roots up to the edible parts of the crop,’ said professor Luo.

Louise Edge, senior campaigner at Greenpeace, told the Telegraph that it is well known plastic waste is degrading into tiny particles and reaching seafood.

It is also going into ‘tap water, beer, and even the air we breathe’, she said.

‘Shoppers choose to buy loose produce to avoid single-use plastic packaging, so reports that tiny microplastics could be getting inside vegetables and cereal crops directly from the environment is disheartening, not to mention unappealing.’

Scientists already knew that particles as tiny as 50 nanometers in size could penetrate plant roots but this new study shows plastics 40 times larger can enter.

The microplastics identified in this study were spherical plastic particles up to 2 micrometers in size with a small degree of mechanical flexibility, he said.

These features allowed them to squeeze into the small space of plant root cells. 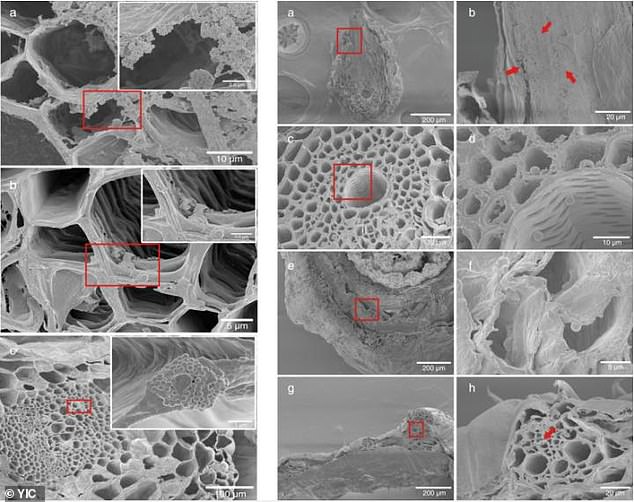 ‘Another mechanism is that at the lateral root emergence sites there are small cracks, and then the particles go through those cracks and enter the xylem vessels.

‘Thus it is even possible that particles larger than the ones we studied might also be taken up by plants,’ said Dr LI Lianzhen, first author of the study.

These findings shed new light on the possibility of food chain transfer of microplastics, the team explained.

This raises obvious concerns about growing crops on fields contaminated with wastewater treatment discharge or sewage sludge, a process that could introduce microplastics into the food chain.

It also raises the key question of how microplastics affect human health, a question for which there is as yet no clear answer.

Aside from the possible health impact, microplastics in crops is also undesirable from the standpoint of agricultural sustainability, Luo said.

The findings have been published in the journal Nature Sustainability.