Toddlers share 96% of the same gestures as chimpanzees to communicate

They really are little monkeys! Toddlers share 96% of the same gestures as chimpanzees to communicate day-to-day requests

Toddlers use the same gestures as chimpanzees and gorillas showing they really are just ‘tiny apes’, claim researchers.

One to two year olds use 52 limb and body movements to communicate – nine in ten of which are observed in great apes.

This is a crucial stage of development when infants are on the cusp of learning language, say Scottish scientists behind the findings. 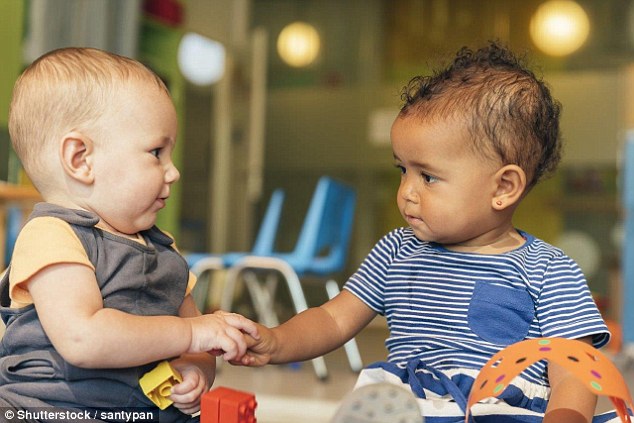 Toddlers use the same gestures as chimpanzees and gorillas showing they really are just ‘tiny apes’, claim researchers. One to two year olds use 52 limb and body movements to communicate – nine in ten of which are observed in great apes (stock image)

Senior author Dr Catherine Hobaiter, of the School of Psychology and Neuroscience at St Andrews University, said: ‘Wild chimpanzees, gorillas, bonobos and orangutans all use gestures to communicate their day-to-day requests.

‘But until now there was always one ape missing from the picture – us.’

In the first study of its kind her international team used the same method of recording gestures for both species.

Chimpanzees were filmed in their habitat, the Budongo Forest in Uganda, while video recordings were made of 13 young children as they interacted with peers, caregivers and relatives at home, nurseries and during shopping trips in Germany and Uganda.

Dr Hobaiter says humans and chimps are the only members of the animal kingdom that have a system of communication where they deliberately send messages to another individual.

She said: ‘We used exactly the same approach to study young chimpanzees and children, which makes sense – children are just tiny apes.’

The analysis was carried out in two countries to account for cultural differences. The great apes used over 80 different gestures in the wild.

This finding enabled the team, including researchers at the University of Neuchatel, Switzerland, and the universities of Gottingen and Hamburg, Germany, to complete a ‘great ape dictionary’ to investigate what they mean.

The scientists were surprised by just how many gestures the children had in common with our ape cousins. 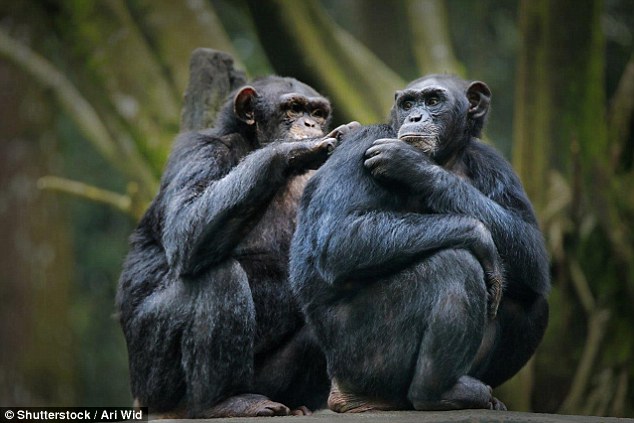 Chimpanzees were filmed in their habitat, the Budongo Forest in Uganda, while video recordings were made of 13 young children as they interacted with peers, caregivers and relatives (stock image)

Dr Hobaiter added: ‘Children employed 52 distinct gestures, 46 (89 per cent) of which are present in the chimpanzee repertoire.’

These included actions as diverse as reaching with the palm outstretched, raising, waving or shaking the arm, clapping, and shaking or throwing objects.

Dr Hobaiter went on: ‘Of the six remaining, four of the gestures used by children: “Hit self”, “Object on head”, “Rub” and “Tapping self”, are present in the gorilla repertoire and two gestures: “Arm bend” and “Hand wave”, were specific to children.’

‘Like chimpanzees, children used them both singly, and in sequences, and employed individual gestures flexibly towards different goals.’

‘We thought we might find a few of these gestures – reaching out your palm to ask for something or sticking your hand up in the air.

‘But we were amazed to see so many of the “ape” gestures used by the children.’

And they found like young apes, the children used them in a similar way when communicating with parents and peers – even using combinations to ask for different things.

They also identified some differences. For instance, they point far more than young apes. Also, waving your hand – to say ‘hello’ or ‘goodbye’ – appears to be unique to humans.

ARE CHIMPS OR CHILDREN MORE INTELLIGENT?

An experiment, the results of which were published in June, revealed most children surpass the intelligence levels of chimpanzees before they reach four years old.

The study, conducted by researchers at the University of Queensland’s School of Psychology, tested for foresight, which is said to distinguish humans from animals.

The researchers then monitored the reactions of a child and chimpanzee in their efforts to grab the grape at the other end, before it hit the floor.

But by four years of age, the children had to develop to a level where they knew how to forecast the outcome, and they covered the holes with both hands, catching whatever was dropped through every time.

First author Dr Verena Kersken, of the University of Gottingen, said: ‘Since chimpanzees and humans shared a common ancestor around five to six million years ago, we wanted to know whether our evolutionary history of communication is also reflected in human development.’

The researchers said while humans developed language, it seems we still have access to this shared ancient gestural heritage.

And gestures continue to play an important role before language is fully developed, they added.

Dr Hobaiter said: ‘When we compare human gestures to those of other apes, it looks at first like there is nothing much to compare at all.

‘In adult humans, gestures are thought to be a window into the thought processes accompanying language, and sign languages are equal to spoken language with all of its features.

‘Some research firmly emphasises the differences between human gestures and those of other apes.

‘However, the question about whether there are any commonalities is rarely investigated, and has mostly been confined to pointing gestures.’

She said great apes of all species – human and nonhuman – communicate using a combination of different types of signals including sound, gestures, facial expressions and body postures.

Even cues from colour, such as blushing, or odour can transmit information between individuals.

The full findings were published in the journal Animal Cognition.