Toothless dinosaur that lived 100 million years ago found in Mongolia

A small, chicken-sized dinosaur that lived 100 million years ago has been unearthed by scientists in Mongolia.

It had huge shell crushing jaws and probably fed on eggs, seeds and molluscs thanks to its powerful mouth muscles, overcoming the fact it had no teeth.

It has been named Gobiraptor minutus after the Gobi desert where it was dug up.

Resembling a giant chicken, it was a member of the crested oviraptorosaurs that featured in Jurassic Park. 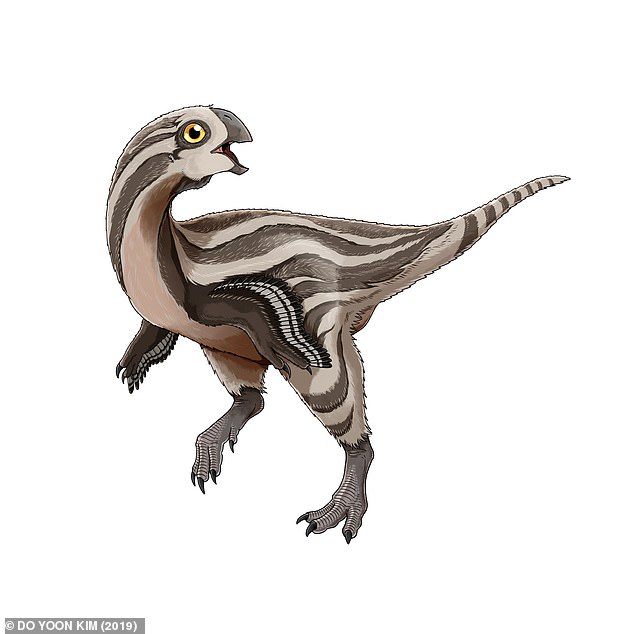 A small, chicken-sized dinosaur that lived 100 million years ago has been unearthed by scientists in Mongolia. It had huge shell crushing jaws and probably fed on eggs, seeds and molluscs (artist’s impression pictured)

The fact it would have eaten shellfish that it could easily crack open sheds fresh light on their lifestyle, scientists say.

Some have suggested they were herbivores as the skull would not have enabled meat-eating but scientists disagree on this and say it likely ate both plants and animals.

Gobiraptor’s incomplete skeleton was found at a site known as the Nemegt Formation which has provided a treasure trove of fossils.

The oviraptorosaurs lived during the Cretaceous period, which spans the period from 79 to 145 million years ago.

But there was enough of the skull and other bone parts for the team to produce an artist’s impression of how it looked.

Oviraptorosaurs grew up to 11 feet (3 metres) long and weighed up to 500lbs (225 kgs). They had a large toothless beak, long legs, huge feet and claw-tipped arms.

They were a diverse group of dinosaurs that inhabited Asia and North America. 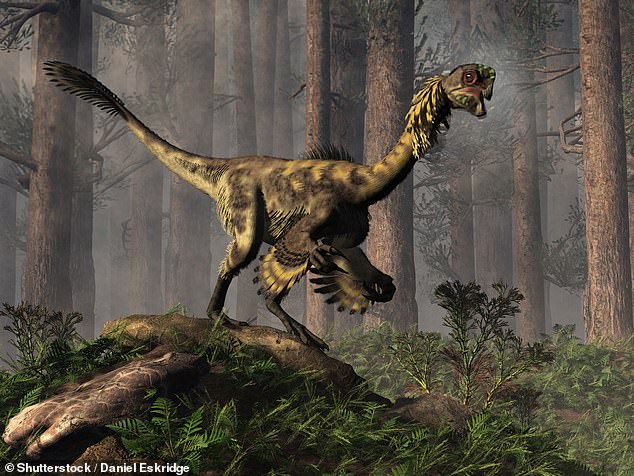 The oviraptorosaurs (artist’s impression pictured) lived during the Cretaceous period, which spans the period from 79 to 145 million years ago. Resembling a giant chicken, it was a member of the crested oviraptorosaurs that featured in Jurassic Park

But despite the abundance of skeletons discovered in southern China and Mongolia, their diet and feeding strategies are still unclear.

Describing Gobiraptor minutus in PLOS ONE, the researchers say it can be distinguished from its cousins through the unusual thickened jaws.

This supports previous theories that oviraptorosaurs could eat shell fish and other tough to bite grub.

Analysis of the thigh bone suggested it was from a very young individual. The Nemegt Formation consists mostly of river and lake deposits.

The discovery confirms these dinosaurs were extremely well adapted to wet environments.

The researchers propose that different dietary strategies may explain the wide taxonomic diversity and evolutionary success of this group in the region.

Professor Lee said: ‘A new oviraptorid dinosaur Gobiraptor minutus from the Nemegt Formation is described here based on a single specimen that includes incomplete cranial and postcranial elements.

‘The unique morphology of the jaw and the accordingly inferred specialised diet of Gobiraptor also indicate different dietary strategies may be one of important factors linked with the remarkably high diversity of oviraptorids in the Nemegt Basin.’

WHY DID THE DINOSAURS GO EXTINCT?