Internet connections could soon be made 100 times quicker thanks to research that uses light that has been twisted into a spiral.

Researchers claim it could be easily applied to existing telecommunications networks and significantly boost efficiency.

Fibre optic cables currently require light to be a specific colour or organised so the light travels either horizontally or vertically.

By using light that has been twisted into a spiral the cables can carry far more information. 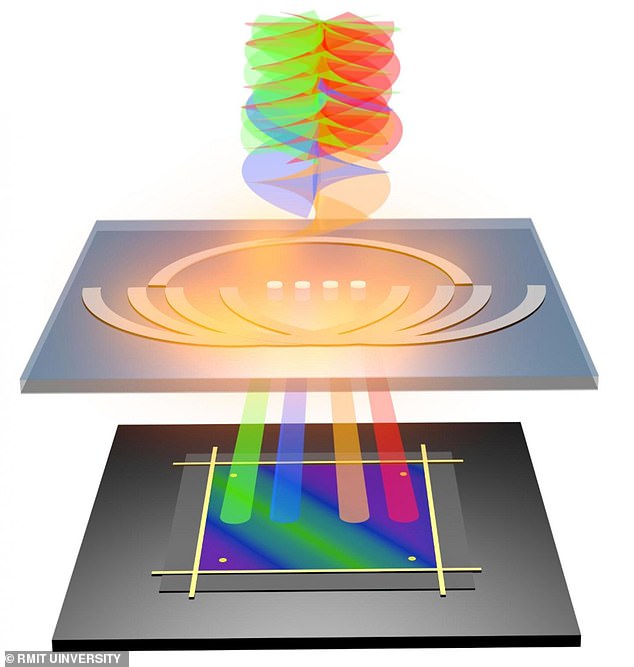 A miniaturised reader analyses the ‘orbital angular momentum’ (OAM) (pictured), or spin, of the light travelling through the fibre optic cables. It allows more varieties of light to be analysed and processed

WHAT IS FIBRE OPTIC BROADBAND?

Fibre optic cables involve tiny tubes that are about as thick as a human hair and are reflective on the inside.

They transfer information by sending flashes of light through the tubes.

This bounces off the reflective walls and along the cable.

These flashes of data are then received and interpreted at the other end.

Current state-of-the-art fibre-optic communications use only a fraction of light’s actual capacity by carrying data on the colour spectrum.

Technology is emerging which make use of the oscillation, or shape, of light waves instead to increase bandwidth by using light which is invisible to humans.

The method for improved internet speed uses light waves that have been twisted into a spiral to increase the level of ‘orbital angular momentum’ (OAM), or spin.

This creates a third dimension for the information to travel through which is less restrictive than previous methods.

‘It’s like DNA, if you look at the double helix spiral,’ said Min Gu from RMIT University.

‘The more you can use angular momentum the more information you can carry.’

Professor Gu and his team were the first to miniaturise the building of a receptor that can detect and decipher the information from the new form of fibre optics.

Previous attempts were the size of a dining table but the latest effort has been shrunk drastically and is now only the width of a human hair.

‘We could produce the first chip that could detect this twisting and display it for mobile application,’ professor Gu said.

Dr Haoran Ren from RMIT’s School of Science, who was co-lead author of the paper, said the tiny device they have built for reading twisted light is the missing key required to unlock super-fast, ultra-broadband communications.

‘Present-day optical communications are heading towards a ‘capacity crunch’ as they fail to keep up with the ever-increasing demands of Big Data,’ Ren said.

‘What we’ve managed to do is accurately transmit data via light at its highest capacity in a way that will allow us to massively increase our bandwidth.’ Internet connections could soon be made 100 times quicker thanks to research that uses light that has been twisted into a spiral. Researchers claim it could be easily applied to existing telecommunications networks and significantly boost efficiency

Professor Min Gu, said the materials used in the device were compatible with silicon-based materials use in most technology, making it easy to scale up for industry applications.

‘Our OAM nano-electronic detector is like an ‘eye’ that can ‘see’ information carried by twisted light and decode it to be understood by electronics,’ he said.

‘This technology’s high performance, low cost and tiny size makes it a viable application for the next generation of broadband optical communications.’

The research was published in the journal Nature Communications.

Fibr, Goodbye, internet, say, slow
You may also like: