Two of Antarctica’s most important glaciers which together cover area the size of Norway are crumbling faster than ever, satellite images reveal

Two key glaciers in Antarctica — which together cover an area the size of Norway — are fracturing faster than ever before, an analysis of satellite images has revealed.

An international team of experts warned that the Pine Island and Thwaites Glaciers — on the Amundsen Sea Embayment — are on the path to disintegrating.

Pine Island and Thwaites are among the continent’s most dynamic glaciers — and their melting is responsible for some 5 per cent of global sea level rise to date.

Their complete loss, however — driven by the warming of the surrounding waters —would raise global sea levels by a whopping 3.3 feet.

Predicting the evolution of the Pine Island and Thwaites glaciers is therefore vital to understanding the future of our warming planet’s seas. 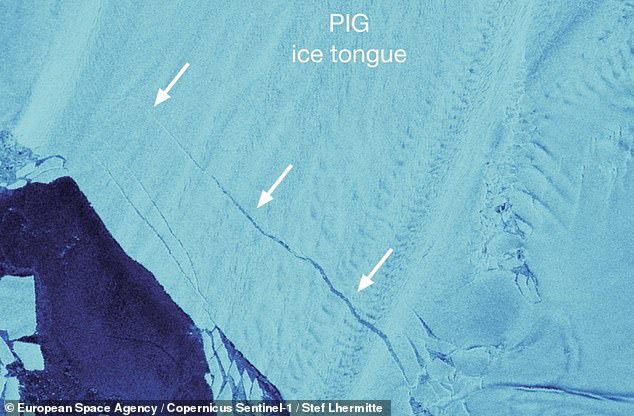 Two key glaciers in Antarctica — which together cover an area the size of Norway — are fracturing faster than ever before, an analysis of satellite images has revealed. Pictured, an image of the Pine Island glacier, as seen in late 2017, with a developing fracture highlighted

‘To reveal what’s really going on at Pine Island and Thwaites, we dug into imaging data from a number of different satellites,’ said paper author and geoscientist Stef Lhermitte of the Delft University of Technology in the Netherlands.

‘We found structural damage at the “shear margins” of the glaciers’ ice shelves, where the ice transitions from fast- to slow-moving — large crevasses, rifts and open fractures that indicate that the ice shelves are slowly tearing apart.’

‘Currently, the ice shelves are a little like a slow car in traffic — they force anything behind them to slow down. Once they’re removed, ice sitting further inland will be able to speed up, which in turn will cause sea levels to rise even faster.’

Crevasses were not seen in images of the ice taken back in 1997 — and the damage appeared far less widespread even in observations from just 2016 — suggesting that the deterioration has been accelerating over the last two decades.

Satellite data was collected by various missions — including the European Space Agency’s CryoSat and Copernicus Sentinel-1, as well as the NASA/USGS Landsat program and the Japanese ASTER instrument aboard NASA’s Terra satellite.

The team tracked the spreading fractures, determined how the topography of the ice shelf and glacier had changed and assessed the speed at which the ice had been moving — from which they could model the impact of the damaged margins.

‘As the glaciers fracture at their weak points this damage speeds up, spreads, and weakens more of the ice shelves, causing further deterioration — and making it more likely that the shelves will start crumbling apart even faster.’

‘We know that a significant amount of glacial ice in West Antarctica is currently being affected by climate change — in fact, a recent study found 24 per cent of this ice to be rapidly thinning and unstable.’

‘These new results underline just how quickly this damage is occurring, and reveal that Pine Island and Thwaites Glaciers are more vulnerable than ever before.’

The full findings of the study were published in the Proceedings of the National Academy of Science. 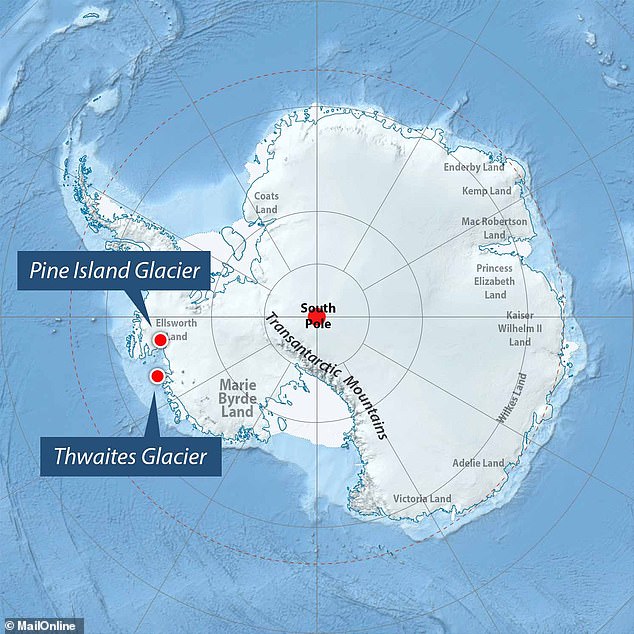