The Premier League has won another blocking order to shut down pirate streams of football matches during the upcoming 2018/19 season.

The blocking order was granted by the UK High Court in an effort to stop unauthorised streams distributing coverage of the games across the web.

An early version of the court order, which was branded ‘game-changing’ at the time, was first handed out to the Premier League in 2017.

In total, some 200,000 illegal streams were blocked during the Premier League season last year.

The High Court order allows broadcasters including Sky, BT Sport and Virgin Media to block and disrupt servers that host illegal streams of the Premier League’s matches ‘via any means’, the Premier League says. 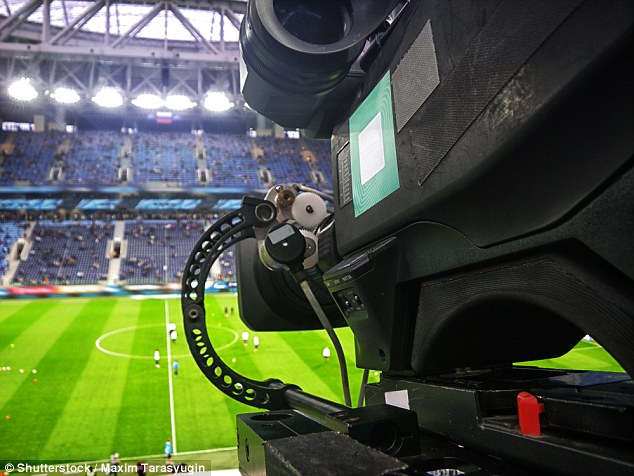 The Premier League is clamping down on fans watching games illegally via pirate streams. It has been granted a piracy blocking order from the UK High Court to stop unauthorised streams from cropping up on the web (stock)

Piracy is a major issue for the Premier League, with thousands of fans refusing to pay monthly subscription fees to services including Sky Sports, BT Sport and Amazon to gain lawful access to coverage of the games.

Online streams, including those viewed with illicit Internet Protocol television (IPTV) boxes, like those powered by Kodi, have becoming increasingly popular.

IPTV boxes also allow fans to watch the games that kick-of at 3pm, when official broadcasters are in an enforced blackout.

An earlier test of the blocking order rolled-out in March 2017 and saw almost 5,000 streams blocked in the first two months.

The ban, which was granted by the court under Section 97a of the Copyright, Designs and Patents Act, allowed internet service providers (ISPs), such as Sky, BT, TalkTalk and Virgin Media, to turn streams off.

The High Court order gave the Premier League permission to ‘target the suppliers of illegal streams to IPTV boxes, and the internet, in a proportionate and precise manner’.

After its success, it was renewed in July 2017 for its first full season.

Speaking at the time, Premier League Director of Legal Services, Kevin Plumb, said: ‘This blocking Order is a game-changer in our efforts to tackle the supply and use of illicit streams of our content.

‘It will allow us to quickly and effectively block and disrupt the illegal broadcast of Premier League football via any means, including so called “pre-loaded Kodi boxes”.’

A pioneering version of the court order was first handed out in 2017, and this renewal will be its third iteration. This court restriction will allow broadcasters such as Sky, BT Sport and Virgin Media to shut down the shady streams

A clause in the court order allowed the Premier League to apply for a renewal, which it did, and has now been approved in court.

It has been expanded to include more internet providers and will affect customers of BT, EE, Plusnet, Sky, TalkTalk and Virgin Media.

Citing evidence provided by the Premier League, Mr Justice Arnold, who made the decision, said that the second order was ‘very effective in achieving the blocking of access to the Target Servers during Premier League matches.’

He also noted that there was no evidence of over-blocking.

The latest iteration of the blocking order ‘enlarges the subset of infringing streaming servers to be blocked’ and also modifies the way in which hosts are notified of infringement.

‘[T]he requirement to notify hosting providers is made subject to a short delay. This is in order to prevent the order being circumvented,’ Justice Arnold writes.

‘The evidence filed by FAPL in support of the application demonstrates that there have been attempts to circumvent the Second Order, and therefore this concern is a very real one.’

The move comes as the Premier League is available to stream legitimately on more services than ever before. 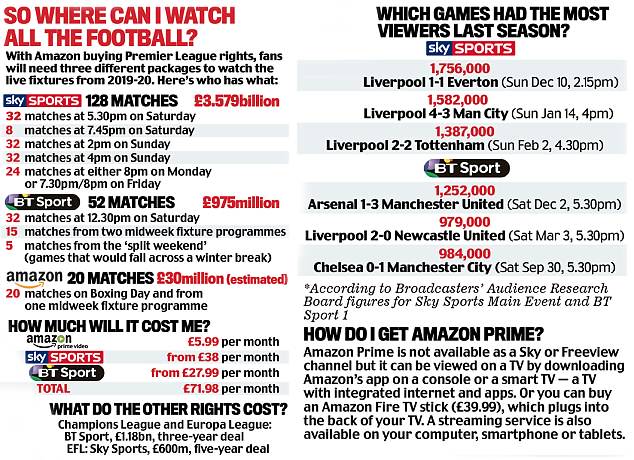 US tech firm Amazon has signed a three-year deal to stream 20 Premier League matches a season.

This is a considerable coup for the top flight and its departing executive chairman Richard Scudamore.

Amazon are understood to have only paid £30million a year for broadcasting simultaneously a full round of midweek fixtures in early December followed by a full festive programme — one of two unwanted packages that went unsold at the Premier League rights auction last February when bids failed to reach the reserve price.

Having Amazon on board means the Premier League has every opportunity over the next three years of attracting the Seattle-based company to invest a lot more when the TV rights are sold again in another competitive market.

Amazon will also stream a weekly highlights show and have begun preliminary talks about additional football programming to support their new content which starts in the 2019-2020 season.

The football will be shown on Amazon Prime Video in the UK at no extra cost to Prime members.

Jay Marine, vice-president of Prime Video in Europe, said: ‘We are always looking to add more value to Prime and we are delighted to now offer live Premier League matches.

‘Over those two December fixture rounds, Prime members will be able to watch every team.’

HOW WILL THE BIG MONEY DEAL FOR PREMIER LEAGUE MATCHES AFFECT FOOTBALL FANS?

5 – matches from the split weekend

20 – matches on Boxing Day and from one midweek fixture programme

HOW MUCH WILL IT COST FANS?  *at current prices

BT Sport – from £6 a month plus additional broadband cost

Customers can access Amazon Prime through their television using FireTV or a FireTV Stick.

It is also possible to access the service through a smart television using the Prime Video app.

Users can also watch on their smartphones using the Prime Video app as well as games consoles and other streaming media players such as Apple TV and Roku.