Ancient Minoan woman’s skeleton is found buried in her tomb along with gold necklace and bronze mirror 4,500 years after she died

A rare Bronze Age tomb of a wealthy Minoan woman has been discovered on the Greek island of Crete by archaeologists during a ‘monumental’ dig.

The fascinating discovery of a full female skeleton buried along with an array of valuable accessories was made during a large dig in the municipality of Sissi, on the north coast of the island.

During the excavation, involving over 100 archaeologists, various remnants of an early Minoan settlement dating as far back as 2,600 B.C. were uncovered. 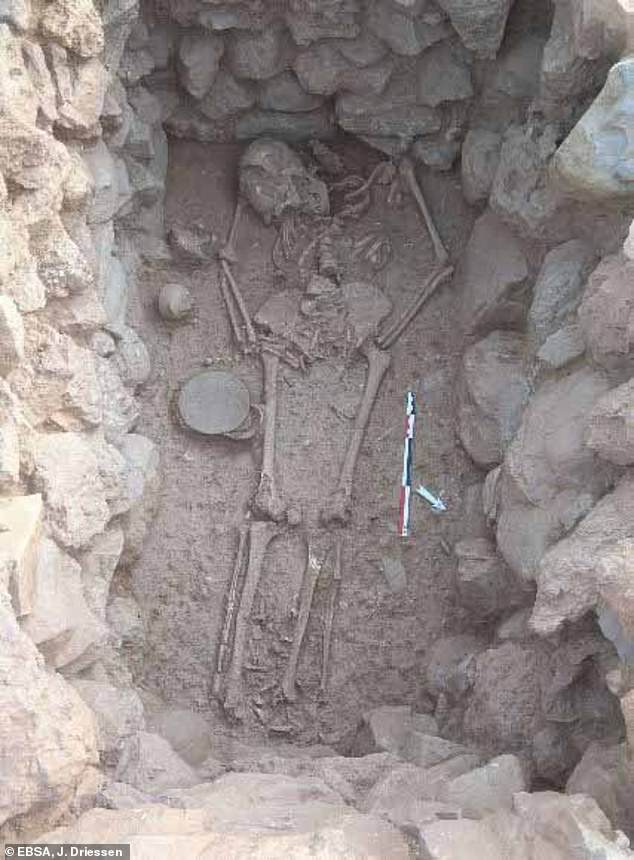 Tombs of this type (cist) are relatively rare in Crete and occur only in Knossos and Chania, as the woman was buried with valuable possessions she is thought to have been wealthy

A large building was revealed to have stood next to a courtyard complex once believed to have been a Minoan village –  abandoned in haste by its population who fled leaving ‘all their material belongings’ at the site.

The same building is thought to have been destroyed in a fire at around 2,500 B.C, but was built up again to form part of the ‘monumental complex’ in 1,700 B.C.

Within the stone coffin discovered in the area the woman was surrounded by an ivory handled bronze mirror, bone and bronze clothes pins and a gold beaded necklace – indicating she was a wealthy Minoan citizen. 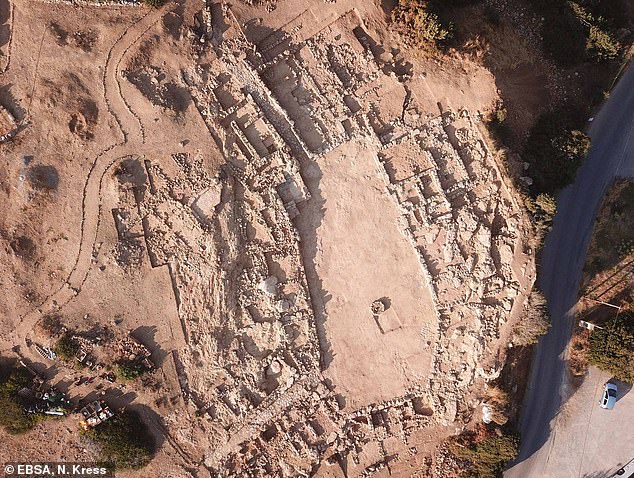 The monumental courtyard complex built in 1,700 B.C. where a Minoan village – abandoned in haste by its population who fled leaving ‘all their material belongings’ at the site

She was buried within a cist grave, a small coffin-like stone tomb.

Graves like this one are a rarity on the Greek island of Crete and are only found in the most ancient Minoan settlements on the island, the city of Chania and Knossos.

In a statement the Greek Ministry for Culture said: ‘The research team continued work in the various areas of the excavation and further disclosed the central courtyard monument complex. 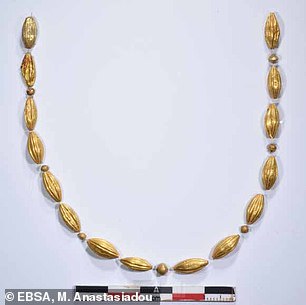 ‘Excavation near the west wing of the complex revealed significant remains of the Early Minoan settlement (ca. 2600 BC).

Following the abandonment of the settlement by its inhabitants, who left virtually all their material civilization, a monumental building was constructed east of the village.

‘This building formed the core of the later West Wing. Although destroyed by fire in 2500 BC, its remains were incorporated almost uniquely into the construction of the monumental courtyard complex, which was erected around 1700 BC.’

Further excavation of the monumental courtyard also revealed a floor covering of ‘premium quality mortar’, adorned with dotted decor and an elegantly built 33-meter-long clay pipe drain, from the central courtyard to the eastern slope.

The dig was carried out by the Belgian School at Athens (EBSA) in collaboration with the Ephorate of Antiquities of Lasithi.

WHO WERE THE MINOANS?

The Minoan civilisation arose on the Mediterranean island of Crete in approximately 2600BC and flourished for 12 centuries until around 1400BC.

The origins of the Minoan and Mycenaean peoples have puzzled archaeologists for more than 100 years.

Last year it was revealed that the Minoans and Mycenaens were descended from early Neolithic farmers who migrated from Anatolia to Greece and Crete.

Modern Greeks, in turn, are largely descendants of the Mycenaeans, the study found.

Experts from the University of Washington, the Harvard Medical School and the Max Planck Institute for the Science of Human History, together with archaeologists and other collaborators in Greece and Turkey, gathered data from the region.

The results showed that Minoans and Mycenaeans were genetically highly similar, but not identical.

The early Neolithic farmers they descended from likely migrated thousands of years prior to the Bronze Age from Anatolia.

While both Minoans and Mycenaeans had both ‘first farmer’ and ‘eastern’ genetic origins, Mycenaeans traced an additional minor component of their ancestry to ancient inhabitants of Eastern Europe and northern Eurasia.

Back in 2013 it was revealed that weapons that dominated Europe for more than 3,000 years were introduced by the ancient Minoan civilisation.

Swords, metal battle axes, long bladed spears, shields and possibly even armour were brought to Europe by the Minoans who ruled Crete.

Since towns and palaces in Crete, the home of the mythical Minotaur, were first dug up and studied a century ago the Minoans have been widely regarded by archaeologists as an essentially peaceful people.

But a reassessment of the role of warriors and weapons in Ancient Crete, which was at its peak from 1900BC to 1300BC, now concludes that the Minoans were a violent and warlike people.

‘Dead penguin’ washes up on Liverpool beach in bizarre footage

Horoscope daily predictions are WRONG because your star sign is off, says astronomer