Some barn owls have brilliant white feathers across their chest and the underside of their wings in order to dazzle their prey, scientists have found.

A study using a range of taxidermy animals found that under a full moon the birds’ plumage causes their prey to freeze for a longer time, making it easier to catch.

White feathers reflect more light than any other colour and this advantage gives the birds of prey an edge over their competitors when hunting.

However, when not a full moon, the birds’ white plumage allows them to be easily detected by harassing competitors, such as carrion crows. 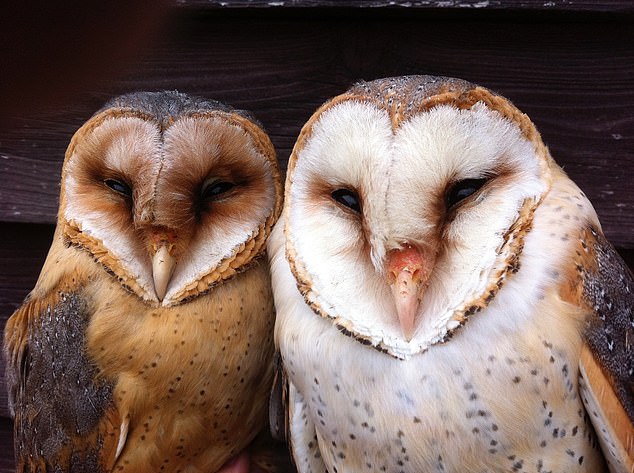 A study using a range of taxidermy animals (pictured)  found that under a full moon the birds’ plumage triggers their prey to freeze for a longer time, making it easier to catch

WHAT DO BARN OWLS HUNT?

In the UK Barn Owls hunt in open rough grassland, for small mammals.

This includes a diet mainly of Field Voles, Wood Mice, and shrews.

The Barn Owl hunts mainly by night but can be seen before dusk and around dawn particularly during the breeding season.

They can sometimes be seen in the daytime when continuous rain the previous night has prevented them from hunting.

This then gives the predator more time to pursue its food and complete a successful hunt.

Under a full moon the birds’ plumage triggers their prey to freeze for a longer time, making it easier to catch, new research suggests.

Moonlight changes the activity of animals, altering the way they spot food and stay hidden.

In the study published in Nature Ecology & Evolution, scientists used GPS trackers to monitor the hunting success of red and white barn owls under different phases of the moon.

Alexandre Roulin, Luis San Jose from the University of Lausanne, Switzerland, and colleagues found that white owls were more easily seen by their prey on moonlit nights.

However, they discovered that, despite this, they were more successful at hunting rodents than the reddest owls, which could remain camouflaged.

The authors flew taxidermied owls on a zip wire to measure the startle response of voles, the barn owl’s main prey, to determine why the white owls were more successful.

They observed that light reflected off the white owls’ feathers, exploiting the voles’ natural aversion to bright light.

The voles froze in the brightness, meaning the owls could capture them more easily.

According to the researchers, this may explain why both types of barn owl plumage persist.

White barn owls are only favoured under certain conditions, such as under a full moon.

The authors write: ‘Our study shows that the moon differently affects the hunting performance and the reproductive success and timing of barn owls with contrasting plumage colourations.

‘This supports the longstanding, untested hypothesis that moonlight influences colouration of nocturnal animals, particularly by uncovering a link between fitness proxies, moonlight and colouration that was missing in previous studies.

‘Moreover, our study raises the possibility that the unique white colouration of barn owls might be favoured by moonlight owing to the effect that the light being reflected from white plumage has on the prey’s behaviour.’

barn, D, feathers, of, owls, White
You may also like: