Follow
Home » Science » Why So Blue, Tarantula? A Mystery Gets a New Clue

Tarantulas are fuzzy, active in the dark and troublingly large — with some South American species tip-tapping around on leg spans bigger than the hands of the most gargantuan professional basketball players.

Many of them are also beautiful.

Alongside those drab brown tarantulas familiar from zoos and pet stores, many other species in the family sport violets, purples, reds, greens or even silky, metallic blues. But those same fierce hues also posed an evolutionary puzzle. Scientists thought tarantulas were colorblind. Plus they do their creepy-crawling only around twilight or nighttime, when colors are muted. So why be pretty at all?

“Something so obvious as their very bright and vivid colors remains incredibly mysterious,” said Saoirse Foley, a biologist now at Carnegie Mellon University who got her first pet tarantula at age 11. “We had no idea why.”

Now we might. As Dr. Foley started studying the question during graduate school at the National University of Singapore, her team found that the green colors of some species might help with camouflage. But the metallic blues of other tarantulas don’t seem to help with defense, hinting that they might be for attracting mates — and even that tarantulas might see a much more vibrant world than we knew, her team reported Wednesday in Proceedings of the Royal Society B.

“I’m thrilled,” said Nathan Morehouse, an expert on spider vision at the University of Cincinnati who was not involved in the analysis. “This makes tarantulas a very exciting group moving forward to think about.”

Finding data on the full range of tarantula colors required getting creative. Rare tarantulas are scarce even in world-class museum collections, said Vinodkumar Saranathan, a biologist at the National University of Singapore who led the study with Dr. Foley. And these collections can also be biased because of colonial history: London institutions, for example, might overrepresent tarantulas from former English colonies as opposed to other parts of the world. 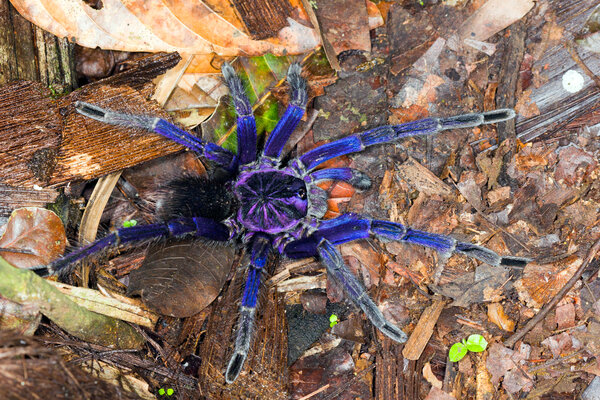 Plus traipsing around the world’s jungles for unusual giant spiders is expensive, not to mention politically sensitive. Instead the team turned to an online database — birdspiders.com — for undoctored photos they could use to measure bright greens, blues and other colors from across the tarantula family tree.

They found that green hues had evolved several times in spider lineages that had previously taken to the trees, suggesting such colors help tarantulas hide among leaves in faint light.

But some tarantulas don’t just hide from predators. Some warn off their pursuers with defensive tricks, such as rubbing their mouthparts to create a hissing sound. Others use their back legs to kick off their own hairs into a shrapnel cloud that lodges into a predator’s skin, triggering an immune response.

That led the team to wonder if blueness might be a form of warning to predators — don’t mess with me — akin to these behaviors. If so, they hypothesized that blue tarantula species should tend to employ such defensive countermeasures, too. But the team saw that blueness seemed unrelated to whether a tarantula was capable of fighting back.

Instead it looked like a much older trait, an ancestral quality retained by many tarantula lineages. That suggests, they say, that the color might be intended for other tarantulas, not just predators.

Tugging more on that thread, the team then looked at databases of proteins used by various tarantulas. They found several opsins, proteins that form color-sensing structures when they are used in spider eyes, but that can also occur in other body tissues. Having these opsins alone doesn’t prove tarantulas can see their own intense colors. But it certainly points researchers toward more conclusive experiments that could.

“We really need people to bring these critters to the lab,” Dr. Saranathan said.

Proving tarantula color vision will take time, Dr. Morehouse cautions, but the prospect is exciting. “While we can ooh and aah about how beautiful they can be, it’s also striking how little we know about what that beauty looks like to them,” he said.

“And I think that’s true of so many animals.”