Wild bison will roam British woodland for the first time in more than 6,000 years when they are reintroduced in Kent

Four wild bison will be released into woodland in Kent by spring 2022 as part of a plan to naturally boost Britain’s wildlife habitats.

The European bison will live in a cordoned-off area of Blean Woods near Canterbury, close to the University of Kent campus.

Although they are thought to have grazed here thousands of years ago, no bison bones have ever been found under our soil.

Their bones have, however, turned up under the North Sea from nearly 12,000 years ago on Doggerland – the land bridge that connected the UK to Europe.

The lottery-funded project, led by Kent Wildlife Trust and the Wildwood Trust, aims to use the grazing 6ft-tall beasts, which can weigh up to 1,000kg (2,200lbs) to help rejuvenate the native woodlands.

It is known as an ‘ecosystem engineer’ because of its ability to create and improve habitats for other species.

European bison – the continent’s largest land mammal – is the closest living relative to ancient steppe bison that once roamed Britain, becoming extinct at the end of the last Ice Age 10,000 years ago. 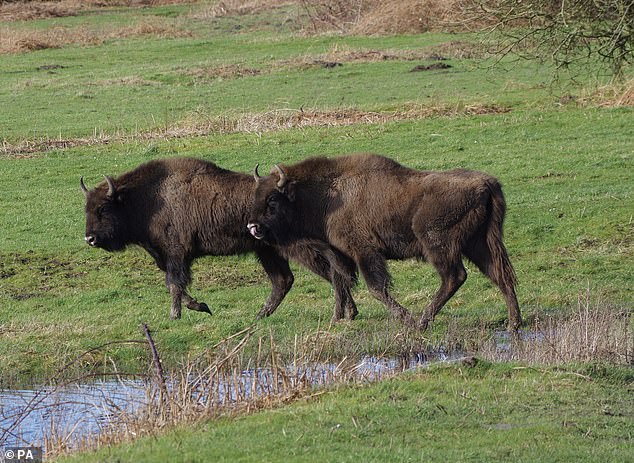 Bison from the Slikken van de Heen nature reserve in Zeeland. Bison are being introduced to a British woodland in a project project led by Kent Wildlife Trust and the Wildwood Trust to restore ancient habitat and its wildlife 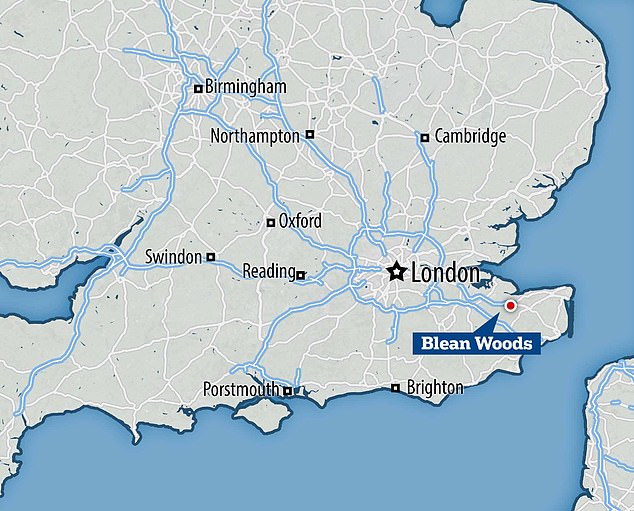 The European bison will live in an cordoned-off area of Blean Woods near Canterbury, close to the University of Kent campus

The enormous animals are largely peaceful and live on a diet of grasses and other forms of vegetation.

They are not dangerous animals and only manifest aggression in response to prolonged disturbance at close range, according to a 2018 study.

Despite being peaceful, the closely-knit herd will be introduced into a fenced enclosure away from public footpaths.

They will be within a wider 500 hectare (1,200 acre) patch of land which will also use other grazing animals such as Konik ponies to create varied and healthy habitat.

It will be the first time bison have been introduced to a nature reserve to help woodland thrive in the UK.

‘The partners in this project have long dreamt of restoring the true wild woodlands that have been missing from England for too long,’ said Paul Whitfield, Director General of Wildwood Trust.

‘This will allow people to experience nature in a way they haven’t before, connecting them back to the natural world around them in a deeper and more meaningful way.’ 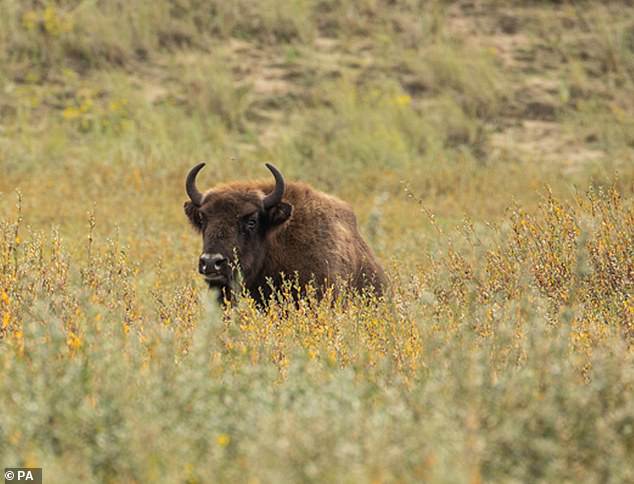 European bison, the continent’s largest land mammal, are the closest living relative to ancient steppe bison that would have once roamed Britain and naturally managed the habitat 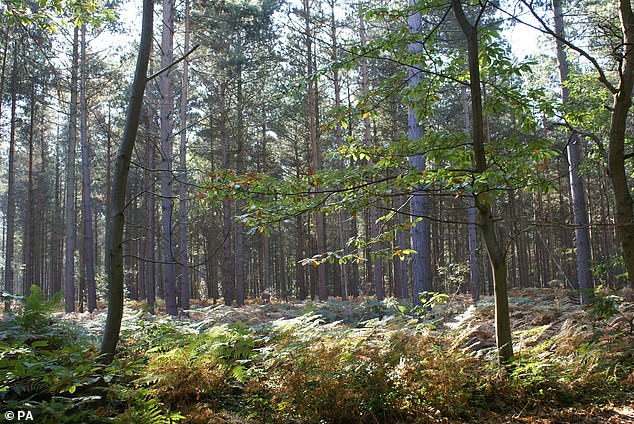 The £1 million project led by Kent Wildlife Trust and the Wildwood Trust will help manage the ecosystem of Blean Woods near Canterbury, Kent (pictured)

The UK project will likely initially involve four bison who are already acquainted with one another to ensure the herd is a tight group.

The animals will be introduced from a wild population from other similar projects in Europe, according to the Kent Wildlife Trust.

Similar projects across the continent since 2000 have already seen the successfully reintroduced in Poland, Romania and the Netherlands.

Bison are particularly useful as a form of natural environment control because of the unique way in which they graze.

They prefer bark to other parts of plants and trees, which is the opposite to many other large herbivores. 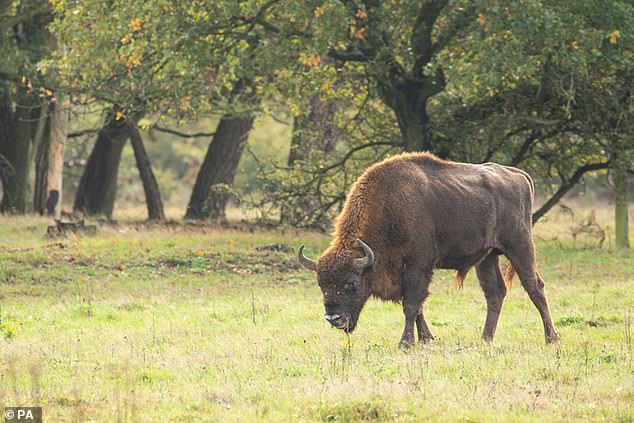 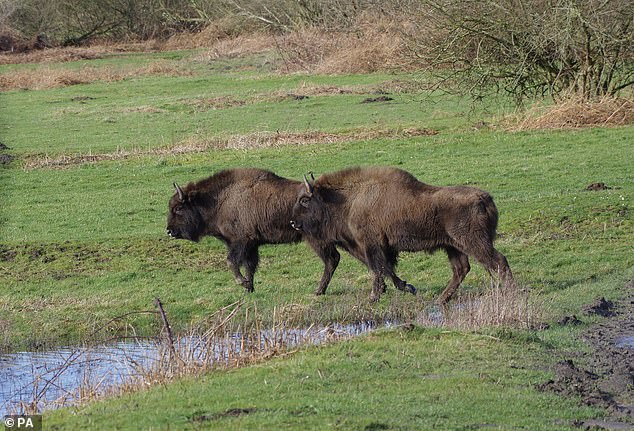 A closely-knit herd of four European bison will be introduced into a fenced enclosure away from public footpaths, in what is the first time the animals have been introduced to a nature reserve to help wildlife in the UK 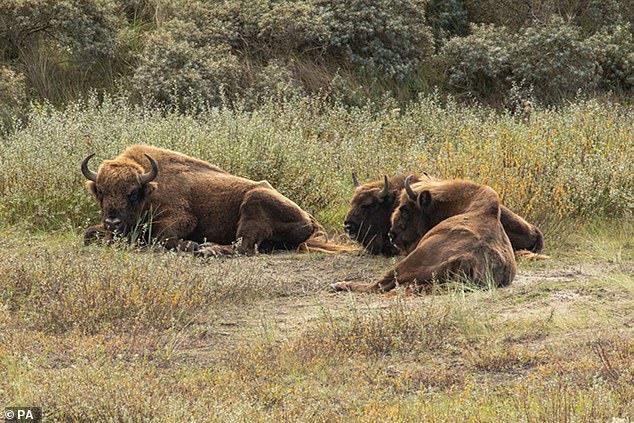 They will be within a wider 500 hectare (1,200 acre) area which will also use other grazing animals such as Konik ponies to create varied and healthy habitat

They fell trees by rubbing up against them and then eat the bark, creating areas of space and light in the woods.

It also benefits a range of smaller animals and plants by providing trees which turn into deadwood, offering food and habitat for insects, small mammals and plants.

Bison have shaggy coats and can often be seen rolling around in dry patches of land, a habit called dust bathing.

The practice helps them rid themselves of parasites while simultaneously removing moulting fur.

In Blean Woods, dust bathing would be good for lizards, burrowing wasps and rare arable weeds, while bark stripping would create standing deadwood that benefits fungi and insects such as stag beetles, conservationists say.

Due to their large size and strength, they also create corridors through densely vegetated patches, which joins various swathes of lands and prevents populations of smaller animals from becoming isolated.

‘Without an animal like bison these functions are missing in woodlands, and this project aims to restore those functions,’ a Kent Wildlife Trust spokesperson told MailOnline.

The project is funded by £1,125,000 from the People’s Postcode Lottery Dream Fund, created to help realise good causes, over a two-year period.

Kent Wildlife Trust owns several woods in the Blean area, one of the largest areas of surviving ancient woodland in England.

It will be responsible for the overall management of the project, including the installation of maintenance of infrastructure, such as fencing.

‘Using missing keystone species like bison to restore natural processes to habitats is the key to creating bio-abundance in our landscape,’ said Paul Hadaway, director of Conservation at Kent Wildlife Trust.

A HISTORY OF THE EUROPEAN BISON

Their range originally extended eastward across Europe to the Volga River and the Caucasus Mountains.

The animals are known to historically populate Poland and Belarus, but other countries that are home to the European bison include Lithuania, Russia, and Ukraine.

European bison – the continent’s largest land mammal – is the closest living relative to ancient steppe bison that once roamed Britain, becoming extinct at the end of the last Ice Age 10,000 years ago.

After the Ice Age, man hunted the bison so intensively that it was forced into the most remote corners of Europe.

Although European bison are believed to have grazed in Britain thousands of years ago, no bison bones have ever been found under our soil.

Their bones have, however, turned up under the North Sea from nearly 12,000 years ago on Doggerland – the land bridge that connected the UK to Europe.

European bison (Bison bonasus) went extinct in the wild mainly due to hunting, but habitat degradation and competition with livestock also played a part.

In Europe it became extinct in the wild after World War I.

Occupying German troops killed 600 of the European bison in the Białowieża Forest for sport, meat, hides and horns.

By 1927, the species had been lost from the wild entirely and only 54 individuals survived in European zoos.

Between 1920 and 1928 there were no single European bison in the Białowieża Forest.

The European bison was successfully reintroduced in the Białowieża Forest in 1929 from the animals kept in zoos.

The first two bisons were released into nature to the Białowieża Forest in 1952 and by 1964 more than 100 existed.

Since then there have been re-introductions to forests in Belarus, Poland, Russia, Lithuania, the Ukraine, Romania and Slovakia.

Up until now, zoos and wildlife parks have helped save the European bison from extinction, including at Highland Wildlife Park near Kingussie, Highland, Scotland.

The European bison closely resembles their North American cousin but is considered a separate species.

The European bison’s dense coat is dark to golden brown in colour and is less bushy than that of the American bison.

Both sexes have short horns that project outwards and then curve upwards.

European bison prefer a woodland habitat where they live in small herds browsing on leaves and other vegetation.

bison, British, roam, to, wild, woo
You may also like: