Women increased their alcohol intake more than men during the first lockdown and this time is likely to lead to MORE drinking due to darker, colder days, charity warns

During the first coronavirus lockdown women increased their alcohol intake more than men, and a charity warns the second lockdown will see more drinking.

A study by alcohol education charity Drinkaware suggested 26 per cent of people in the UK increased their alcohol consumption between March and June 2020 and one in ten reported increased drinking over the entire course of the lockdown.

However, the report found that overall drinking had barely changed compared to previous years, with just over half of adults drinking at least once a week.

Most of the increase in consumption was driven by women, the charity discovered, adding that 14 per cent of women said they were drinking over 14 units per week.

Drinkaware says it expects more people to suffer with alcohol abuse in the second lockdown because of darker days and colder temperatures. 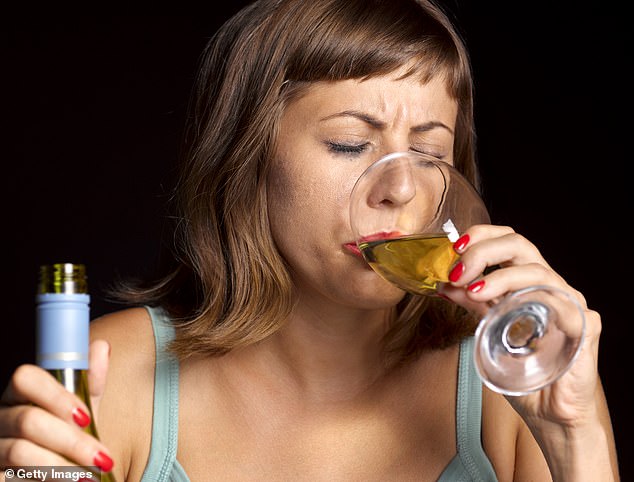 During the first coronavirus lockdown women increased their alcohol intake more than men, and a charity warns the second lockdown will see more drinking. Stock image 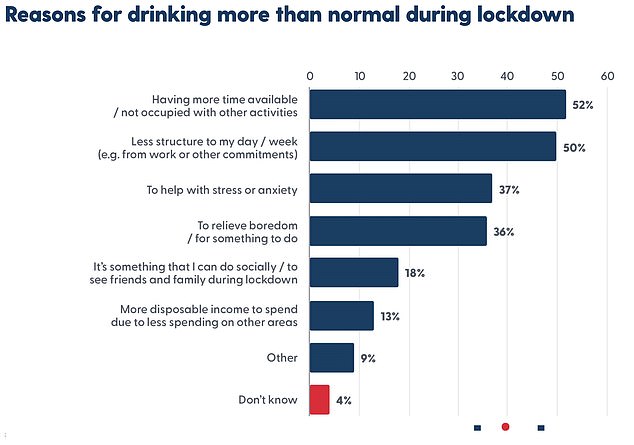 The alcohol education charity chief executive, Elaine Hindal, said it was ‘unclear’ why the increase was slightly more marked among women, but that it was ‘very consistent with wine sales’.

She said that women were also generally better at accessing help for alcohol-related problems than men.

Those who consumed fewer units cited a lack of social occasions as the main reason, while others tried to improve their physical health.

Adding this was liekly going to be worse during a second lockdown, due to start this Thursday and last at least four weeks until December 2.

Hindal said: ‘We are concerned more this time because of the winter. I’m worrying that we are likely to see people going back to alcohol as a coping mechanism.

‘We are not questioning the reason for a lockdown, but it’s just recognising that people’s mental health and pressure people are facing haven’t gone, and will only be exacerbated by a second lockdown.’

She added: ‘People are drinking more because they are uncertain about their work or job, but that increases massively for people who are self-employed, so it’s really important that these people are given help and support from the Government.’ 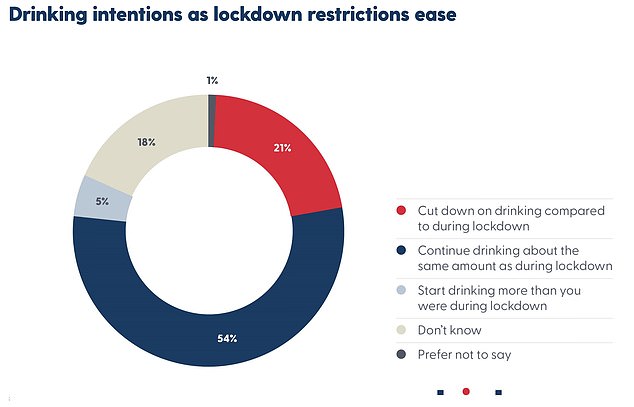 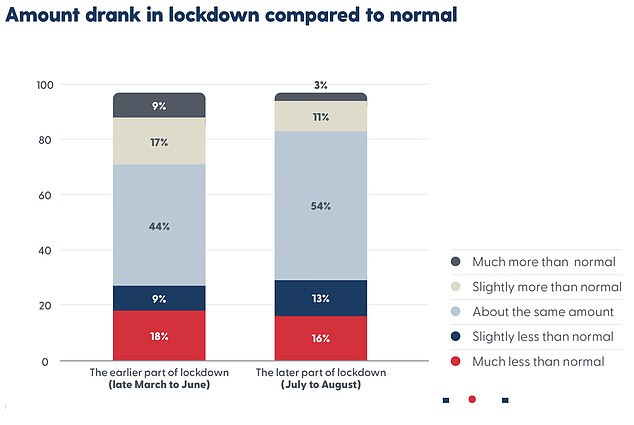 Most people drank the same as normal during lockdown compared to previous years, but 26 per cent drank slightly more or much more in early lockdown and 14 per cent in later lockdown

The Drinkaware study, which was based on a YouGov survey of 9,046 UK adults aged 18 to 85 between August and September, warned there could be an increase in alcohol-related health problems.

The charity has called on the Government to prioritise the impact of alcohol harm and said the issue should be considered as a factor within mental health strategies.

Some 58 per cent of people surveyed found their drinking behaviours did not change during lockdown.

Drinkaware, which is funded by donations from UK alcohol producers, retailers and supermarkets, recommends a weekly alcohol limit of 14 units – the equivalent of six glasses of wine or six pints of beer.

They found 14 per cent of women reported that they had exceeded this amount on a weekly basis during lockdown, compared to 12 per cent of men.