Researchers have concluded that Pūhāhonu in Hawaii is the world’s largest shield volcano, revising past assessments that had claimed nearby Mauna Loa was the largest.

A team from the University of Hawaii at Mānoa took a series of new measurements, including a chemical analysis of underwater rocks and a comprehensive survey of the ocean floor to get a true sense of how large Pūhāhonu is.

According to their findings, the undersea volcano is twice the size of Mauna Loa, measuring 171 miles long and 56 miles wide. 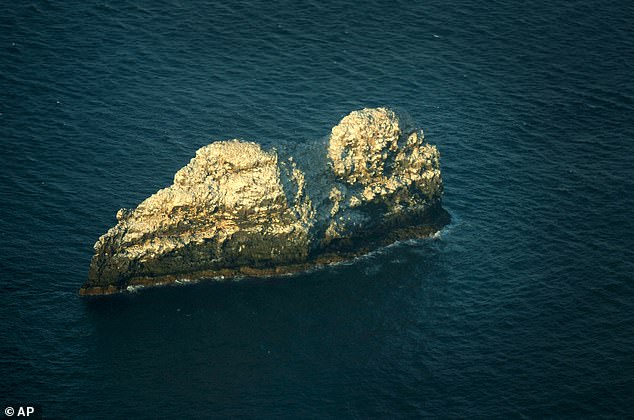 Researchers from University of Hawaii at Mānoa have taken revised measurements of the Pūhāhonu shield volcano and declared it the largest on Earth, even as only two 170-foot peaks are visible above the ocean surface

Hawaiian researchers had suspected the volcano was likely the largest in the region, according to a report in CNet, but getting formal measurements was challenging because so much of it lies underwater.

Those two small peaks were sometimes called ‘Gardner Pinnacles,’ after westerners first recorded them in the logs of an American whaling ship in 1820.

‘We are sharing with the science community and the public that we should be calling this volcano by the name the Hawaiians have given to it, rather than the western name for the two rocky small islands that are the only above sea level remnants of this once majestic volcano,’ researcher Michael Garcia told CNet.

Unlike other types of volcanoes, shield volcanoes have a relatively low height and wide surface area, which gives them a circular shield-life appearance. 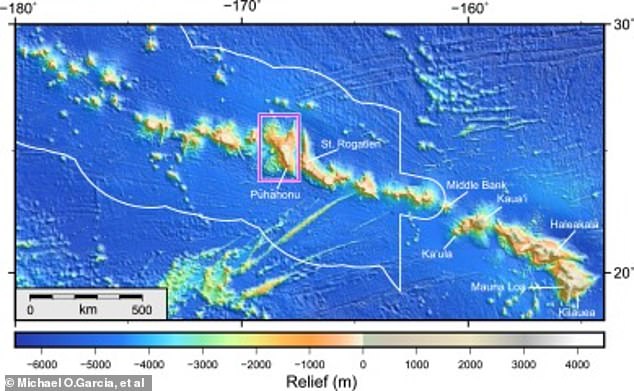 Pūhāhonu is situated in Papahānaumokuākea Marine National Monument, around 620 miles from Honolulu 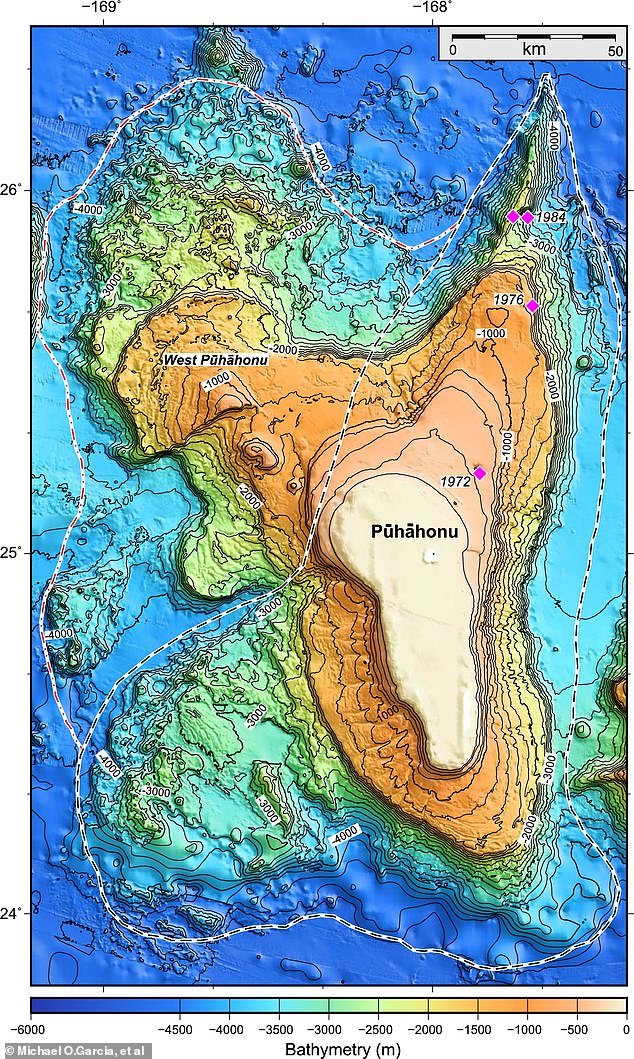 They tend to emit a much more fluid type of lava that spreads across a wider and flatter area than other types of volcanoes.

According to the team, Pūhāhonu is not only the largest shield volcano on Earth, it’s also the hottest, with estimated magma temperatures of around 3,092 degrees Farehenheit.

According to Garcia, it’s likely that the high temperature of the magma is part of what helped make the volcano so large. 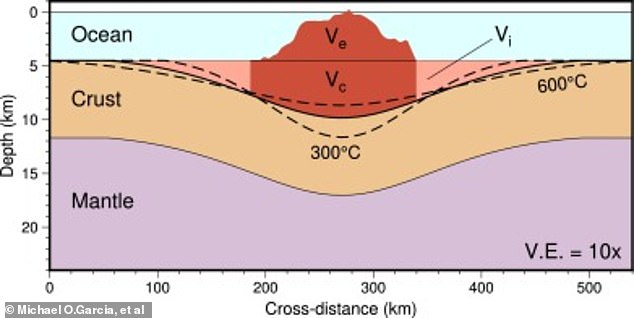 Pūhāhonu is also the hottest shield volcano on the planet with average magma temperatures of 3,092 degrees Fahrenheit, so hot and heavy it is causing the nearby ground to sink 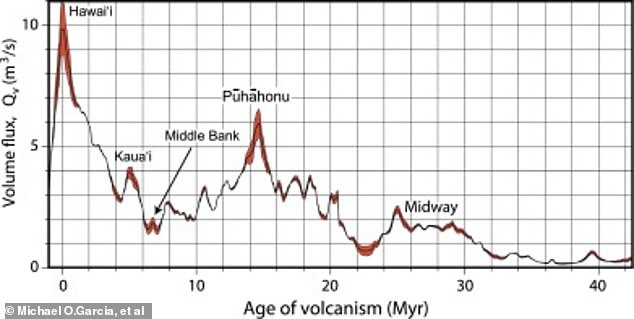 “Volume and temperature go hand in hand,’ Garcia told CNN. ‘Large volume comes from hot magma. It is more likely to erupt if it is hot.’

While some might be surprised to see such a major revision made to the world’s ranking of shield volcanos, Garcia says it’s a testament to how mysterious the Earth’s ocean terrain still remains.

‘[W]e know more about the surface of Mars than what is below the ocean on Earth,’ Garcia said.

‘We are still discovering things about our physical planet that we did not know. There is still much to learn about planet Earth.’

WHAT IS THE RING OF FIRE?

Roughly 450 volcanoes make up this horseshoe-shaped belt with Kilauea situated in the middle. The belt follows the coasts of South America, North America, eastern Asia, Australia and New Zealand. It’s known for frequent volcanic and seismic activity caused by the colliding of crustal plates.

America’s most dangerous volcanoes are all part of the Ring of Fire, and most are on the West Coast, according to the U.S. Geological Survey.

Besides Kilauea, they include: Mount St. Helens and Mount Rainier in Washington; Mount Hood and South Sister in Oregon; and Mount Shasta and Lassen Volcanic Center in California.

Images of lava flowing from the ground and homes going up in flames in Hawaii have stoked unease among residents elsewhere along the Ring of Fire. But experts say an eruption on one section of the arc doesn’t necessarily signal danger in other parts.

‘These are isolated systems,’ Westby said.

WHEN WILL THE WEST COAST VOLCANOES ERUPT?

But the situation can change fast.

‘All our mountains are considered active and, geologically speaking, things seem to happen in the Northwest about every 100 years,’ said John Ufford, preparedness manager for the Washington Emergency Management Division. ‘It’s an inexact timeline.’

Some geologists believe Mount St. Helens is the most likely to erupt.

But six other Cascade volcanoes have been active in the past 300 years, including steam eruptions at Mount Rainier and Glacier Peak and a 1915 blast at Lassen Peak that destroyed nearby ranches. 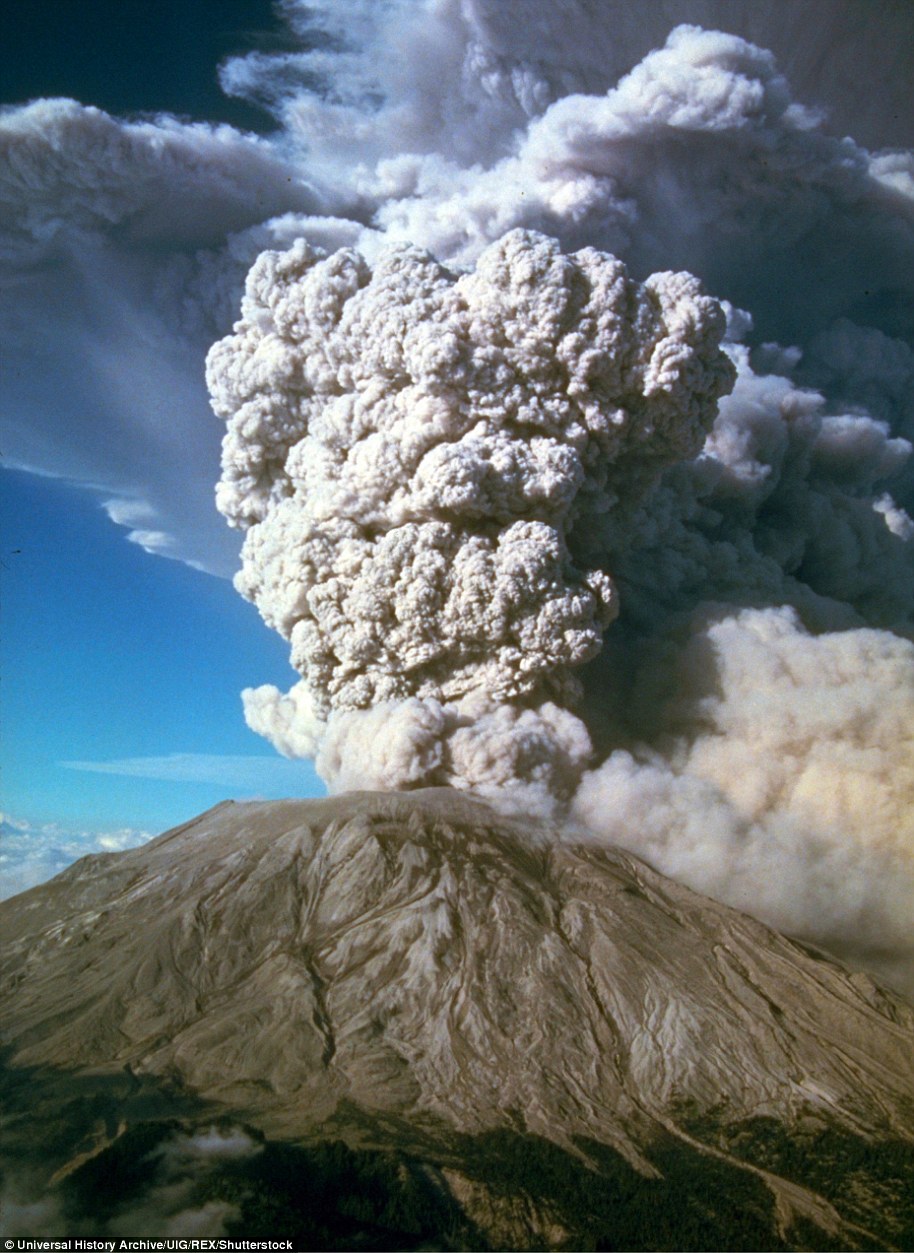 Mount St. Helens’ eruption in 1980 (pictured), killed dozens of people in the Pacific Northwest and sent volcanic ash across the country

WHAT KIND OF DAMAGE COULD THEY DO?

The Big Island scenes of rivers of lava snaking through neighborhoods and sprouting fountains are unlikely in the Pacific Northwest.

‘Lava is not the hazard, per se, like in Hawaii,’ said Ian Lange, a retired University of Montana geology professor.

The Cascade volcanoes can, however, produce huge clouds of choking ash and send deadly mudslides into rivers and streams.

Two of the most potentially destructive are Mount St. Helens, north of the Portland, Oregon, metro area, and 14,000-foot (4,270-meter) Mount Rainier, which is visible from the cities of Seattle and Tacoma.

Mount Rainier eruptions in the distant past have caused destruction as far west as Puget Sound, some 50 miles (80 kilometers) away.

The volcano hasn’t produced a significant eruption in the past 500 years. But it remains dangerous because of its great height, frequent earthquakes, active hydrothermal system, and 26 glaciers, experts said.

Another major danger from a Cascade volcano eruption would be large amounts of ash thrown into the air, where it could foul aircraft engines. 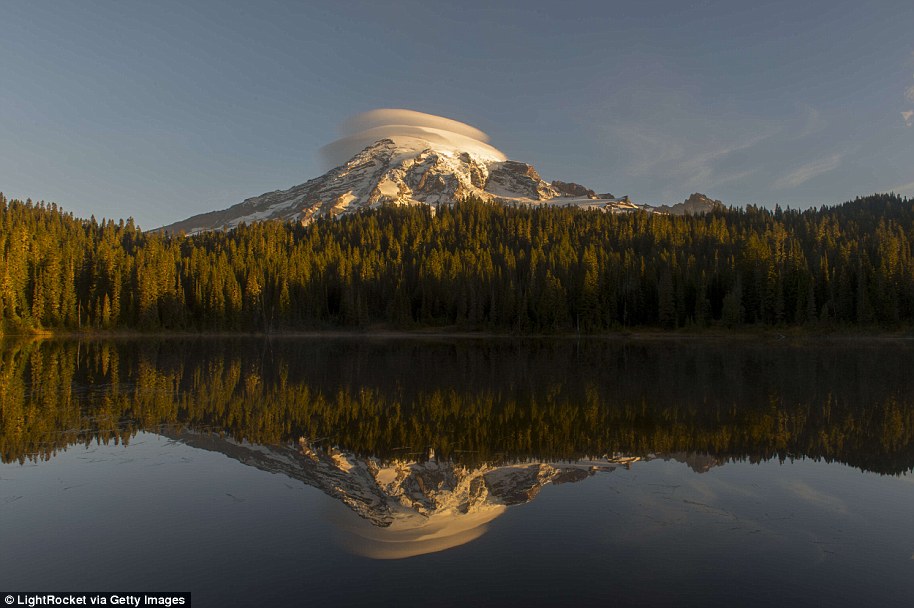 Mount Rainier, which towers above the Seattle metro area, is also one of the 13 active volcanoes in the West Coast’s Ring of Fire

WHAT ARE COMMUNITIES DOING TO PREPARE?

The closest settlement to a West Coast volcano may be Government Camp, on Oregon’s Mount Hood.

Lava could conceivably reach the town, but the greater threat is an eruption triggering a so-called pyroclastic flow, which is a fast-moving cloud of hot ash and gas, experts said.

But Lange believes California’s Mount Shasta is the most dangerous, in part because it is surrounded by towns.

The town of Mt. Shasta has numerous response plans for emergencies, including a volcano eruption, Police Chief Parish Cross said. But the plan for a volcano is pretty fluid, he said.

‘We don’t know the size or scope of the event,’ Cross said, including which direction the eruption would occur.

This is not an issue in Orting, Washington, about 20 miles (32 kilometers) west of Mount Rainier. Orting would be directly in the path of a lahar, and local officials each year conduct drills in which children move from school to higher ground to escape the flow.

Students usually take about 45 minutes to walk the 2 miles (3 kilometers) to higher ground, which should be fast enough to escape, officials said.

‘Our concern is ice and snow melting rapidly on Mount Rainier,’ said Chuck Morrison, a resident of the town of 7,600 who has long been involved in evacuation planning. ‘We need a quick way off the valley floor.’

Orting is the town most vulnerable to lahar damage from Mount Rainier, according to the U.S. Geological Survey.

Scientists say that in the worst case, a 30-foot-high (9-meter-high) lahar with the consistency of wet concrete could rumble through Orting at 50 mph (80 kph) if volcanic activity suddenly melted snow and ice on Rainier.