Microsoft’s next-gen Xbox Series X will be EIGHT TIMES more powerful than its predecessor, the Xbox One

Microsoft’s next Xbox will quadruple the power of the original Xbox One according to new details released by the company.

As noted by The Verge, the improvement outpaces mid-range graphics cards made by Nvidia and AMD and offers the first glimpse into what kind of power the next generation of consoles has in store. 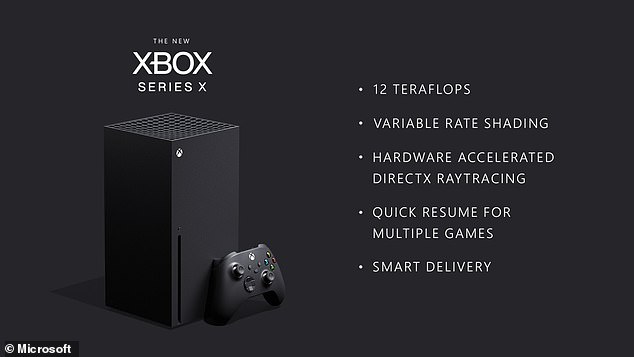 Additionally, Xbox said that the console will have its own patented version of Variable Rate Shading (VRS), a type of technology that chooses where to allocated processing power when rendering an image.

‘Our patented form of VRS empowers developers to more efficiently utilize the full power of the Xbox Series X. Rather than spending GPU cycles uniformly to every single pixel on the screen, they can prioritize individual effects on specific game characters or important environmental objects,’ wrote Xbox in a statement.

‘This technique results in more stable frame rates and higher resolution, with no impact on the final image quality.’

While Xbox plows ahead with hardware improvements, it will work to preserve its standing legacy of games with backwards compatibility.

In a statement, the tech giant said it will retain the ability to play games as far back as the original Xbox on the Series X.

‘Our commitment to compatibility means existing Xbox One games, including backward-compatible Xbox 360 and original Xbox games, look and play better than ever before,’ the company wrote.

‘Your favorite games, including titles in Xbox Game Pass, benefit from steadier framerates, faster load times and improved resolution and visual fidelity – all with no developer work required. Your Xbox One gaming accessories also come forward with you.’

The new console is expected to compete with Sony’s forthcoming PlayStation 5 which had yet to get an official release date.

It’s expected that both consoles could be released later this year, however. The Series X will launch with the latest installment of the Halo franchise, Halo infinite.