YouTube users sending abusive and offensive comments on videos will soon receive a pop-up notice urging them to reconsider posting their remark.

Artificial Intelligence (AI) will scan the comment before it is posted and after a person presses ‘comment’ to send their thought.

If the computer system detects the content of the message is hurtful it will trigger a notification which will let the poster either edit the message or commit to the comment.

The feature will not automatically block comments and instead relies on inducing a change of heart in the online trolls that pepper the site’s creators with vile abuse.

Comments that break the guidelines but are not picked up by the new feature, which comes into force next year on Android, will be subject to the same process of review and removal as they are currently. 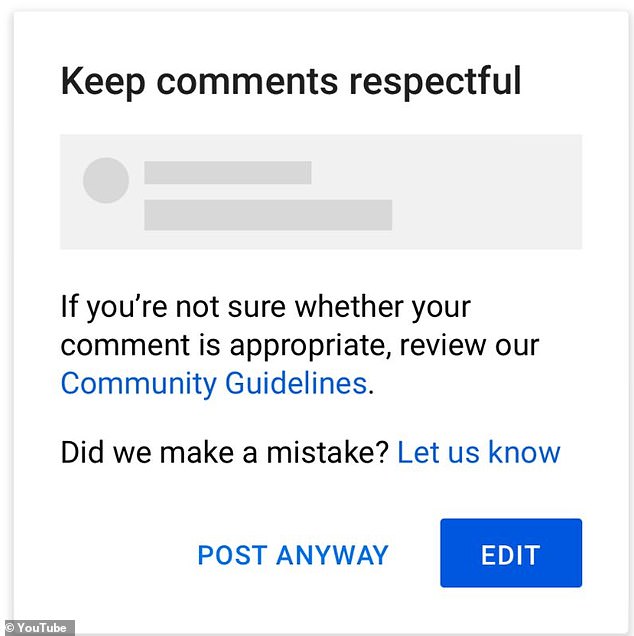 Artificial Intelligence (AI) will scan the comment before it is posted and after a person presses ‘comment’ to send their thought. If the computer system detects the content of the message is hurtful, it will trigger the notification which will let the poster ‘reflect’ before committing

The Google-owned service is bringing in the reminders to try and ‘keep comments respectful’, it said in a blog post.

‘We hope to learn more about what comments may be considered offensive as we continue to develop it.

‘We know there is more work to be done and this is just a start.’

Instagram installed a similar feature earlier in June 2019.  The Facebook-owned site announced via blog post it was introducing a mechanism to notify users ‘when their comment may be considered offensive before it’s posted.’

The comment sections underneath videos is a key way for creators to interact with fans but often descends into a cesspit demonstrating the ugly side of the internet.

Cowardly and hurtful comments are frequently posted with users using the veil of digital anonymity to insult and berate the creators.

YouTube comments specifically have had several high-profiles, including propagating conspiracy theories and home to paedophile rings.

Potentially inappropriate and hurtful comments will be automatically held for review, with the option to remove without reading them at all.

Writing on Twitter, YouTube chief executive Susan Wojcicki said: ‘We’ve been looking closely at how our policies and products are working for everyone, and specifically for the Black community.’