Cody Kennedy, 31, was driving with friends in Twentynine Palms, California, when he came across the bizarre sight.

He had hoped to record some reptilian life in the region of the Mojave Desert for his animal-themed YouTube channel, Crazy Cody’s Creatures.

But when he saw the mystery lights in the sky, he couldn’t help but whip out his camera and start recording.

The baffling clip shows the line of lights swaying left to right in the night sky.

Its white body appears to be rippled with black and can be seen squirming.

“We first saw it about a mile away and it looked like someone was shining a light on the bottom of a flag, but it was too high up to have been attached to something on the ground,” he said.

“So we drove over to it, got under it and filmed it.”

Cody, from Palm Springs, said the object was visible for 30 minutes before it hurtled to the ground and vanished. 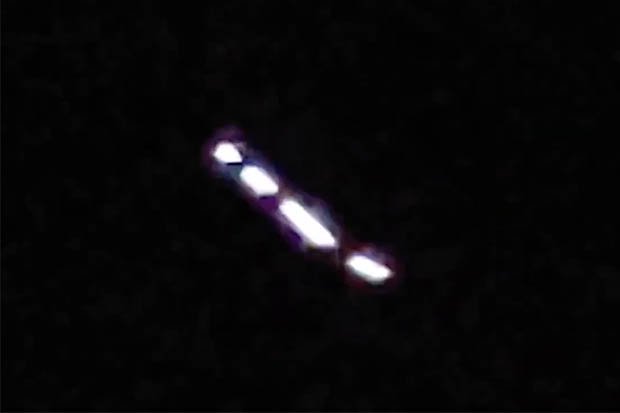 “I think maybe it was the tail of a kite that has some kind of LEDs but I have looked online for something like it and can’t find anything.

“And if it was a kite, where was the person holding it? Also, there were powerlines there too, so kite flying at night would be dangerous.”

The YouTube star has refused to rule out the possibility the UFO could be of alien origins.

“I want to believe,” he said. “I just need some evidence now.”