The atmospheric monitoring service Copernicus says the fires which blazed during summer’s heatwaves are a cause for concern.

They say some so-called zombie fires are smouldering through the winter in peat below the frozen surface.

These underground fires then re-ignite surface vegetation in the Spring.

This spells double trouble: not just CO2 emissions from the burning vegetation, but also from the peat which is naturally a store for CO2.

The researchers estimate that from the start of January to the end of August, Arctic CO2 emissions from fires were 244 megatonnes.

That’s a huge figure – similar to the total for the whole economy of, say, Malaysia or Eygpt.

This wildfire index is just 17 years old, so it can’t paint a full historic picture.

But the scientists are alarmed that this year’s spike in wildfires follows 2019’s previous record, which in turn dwarfs previous trends.

The scientists say the wildfire outbreaks could be sparked by lightning strikes or human activity, as well as by zombie fires.

A senior scientist at Copernicus, Mark Parrington, told BBC News: “The high figure for wildfires last year caught us by surprise, so it was even more surprising to see this year’s figures so much higher still. 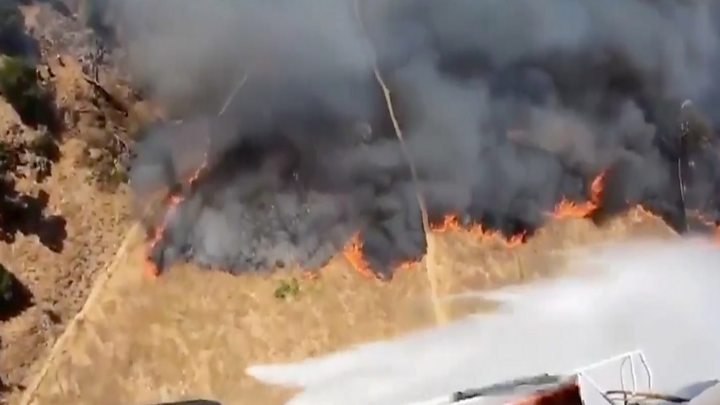 “Obviously it’s concerning – we really hadn’t expected to see these levels of wildfires yet.”

Huge fires have also raged through the Russian Far East Federal District, and a large region of the US has suffered wildfires during heatwave conditions – with large plumes of smoke observed across the Great Lakes.

California in particular has experienced widespread wildfire activity, including the second- and third-worst fires in state history.

Rod Downie, Chief Polar Adviser at WWF, said: “The Arctic is in meltdown. Large areas are burning in front of our eyes.

“The climate crisis behind these broken records is a global problem. In the UK we have the chance to show global leadership at the Glasgow summit next year – but we can only do that if we drastically, and urgently raise our ambition.”

The Copernicus scientists say manmade climate change didn’t directly cause the fires, but rising temperatures add to the likelihood of fire taking hold.

Arct, fires, record, spark, zombie
You may also like:

AI revolution: The jobs to be replaced by Artificial Intelligence in next decade REVEALED

‘UFO’ hovering over Michigan could be ‘message from across the stars’

Breath test `can diagnose Covid-19 within one minute´