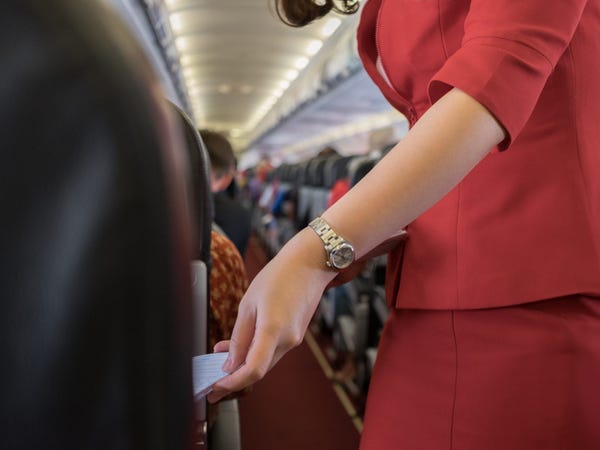 Kat Kamalani, 30, has become an influencer of sorts after sharing glimpses into her life as a flight attendant. At the time of writing, she has 286,400 followers on TikTok, 50,000 followers on Instagram, and 33,500 subscribers on YouTube. A video she posted on TikTok about hotel safety has since gotten over 6.2 million views.

One of her latest videos, titled "The nastiest parts of a plane from a flight attendant," is especially timely in the era of the coronavirus pandemic, and has been viewed almost 1 million times on TikTok.

These are the things on a plane she recommends in her video to steer clear of:

Kamalani said the backseat pockets are cleaned out between flights, but they aren't sanitized. "Think of all the dirty tissues, barf bags, and garbage that has been in there," she said in the TikTok video.

She advised sanitizing the tray table before using it. "I have seen so many parents use this as a changing table for their child's diaper … and then they put it in the backseat pocket," she said.

The air vents above you

Adjusting the air vent? You're probably not the first person to do so. "They've seen thousands of hands," Kamalani said. "Wipe them down before you touch them."

"We don't sanitize them and a lot of people touch and read these to pass by time," she said.

Kamalani recommends using a tissue to lock and unlock the door, thus avoiding touching something half the plane has touched before you. Bonus fact: She also shared that women can find pads in a hidden compartment in the lavatory.

See the whole video below:

Air travel, fl, planes, travel
You may also like:

What it’s like inside quarantine hotels – no fresh air, CCTV, ready meals and DIY room cleaning