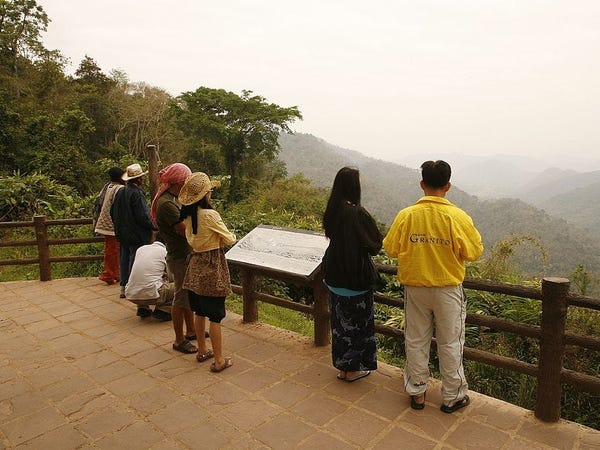 Some campers in Thailand's Khao Yai National Park are being reminded of their trashy behavior during their visit to the UNESCO World Heritage site, located about 100 miles northeast of Bangkok. Government officials have packaged up the garbage they left behind and mailed it back to them — to stress the importance of not littering in the natural environment.

The garbage, which appeared to include plastic beverage bottles and chip bags, was sent back to the campers with a note: "You have forgotten some of your belongings at Khao Yai National Park."

The move was spearheaded by Thailand's Minister of Natural Resources and Environment, Varawut Silpa-archa, who reminded people in a Facebook post on September 14 to take their trash with them upon departure, especially because of the impact it can have on animals looking for food. He added that if they didn't, he would pick up the junk, put it in a box, and return it to their home as a souvenir.

The following day, he updated followers on the situation in another post with photos of the packed trash: "The garbage that tourists left in the park is now packed into the box. It's ready to be returned to the owner of the garbage already. And the park officer has admitted to the police officer. Again, the dumping garbage in the park is a crime."

Below that, he listed the regulations, which included that violators who perform actions that harm natural resources and the environment can receive up to five years in prison, up to a 500,000 Thai Baht (about $16,000) fine, or both.

The park officials traced the trash back to its owners by using camping equipment rental forms, as well as a prescription bottle that was left behind, according to The New York Times.

"We applaud Khao Yai National Park and the Minister of Natural Resources and Environment for their commitment to maintaining the beauty and well-being of our country's natural resources," Thailand's director of tourism authority, Charinya Kiatlapnachai, told The Washington Post via email. "Thailand's national parks and wildlife have had time to recover from damaging results of tourism such as littering over the past six months and this gesture has the best of intentions to ensure we all do our part to help our country remain clean, safe, and beautiful."

After being shut down because of concerns from the coronavirus pandemic, Khao Yai National Park reopened on July 1 to a limited number of tourists by using a reservation system. In addition to temperature checks and face mask requirements, speed limits were lowered because of the increase of roaming animals, according to the Bangkok Post.

Why Formentera should be on your post-pandemic travel list

Parents WON'T have to pay for Covid tests for kids under 11 when they go on foreign holidays, government sources say