'AirShield' device for plane cabins would 'prevent spread of Covid-19'

Airlines could soon be deploying another weapon in the war against coronavirus – a 3D-printed device fitted to cabin ventilation nozzles that directs breath droplets downwards.

It’s called ‘AirShield’ and has been developed and revealed today by leading aviation innovation company Teague.

The Seattle-based firm says that AirShield is ‘a germ isolation system that provides an invisible, effective and consistent additional line of defence against viral transmission in the cabin’. 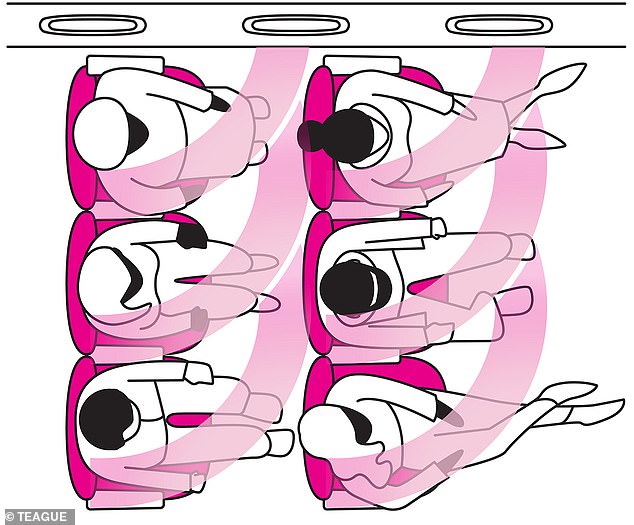 The component turns the air that comes out of the seat nozzles – also known as ‘air-gaspers’ – into ‘engineered air-blades’, Teague explains, thereby controlling the spread of respiratory droplets.

It says: ‘When a passenger breathes, coughs, or sneezes, the water vapour droplets are contained within that passenger’s space and immediately re-directed downwards and out of the cabin to the Hepa filtration units before they have the opportunity to enter the personal space of a neighbouring passenger… offering passengers and crew improved protection and peace of mind.’ 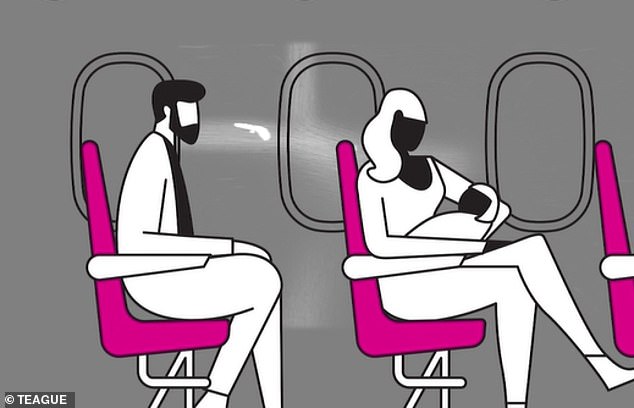 ‘AirShield’ has been developed by leading aviation innovation company Teague. This is a still from an animation it created to show how the system pushes air downwards 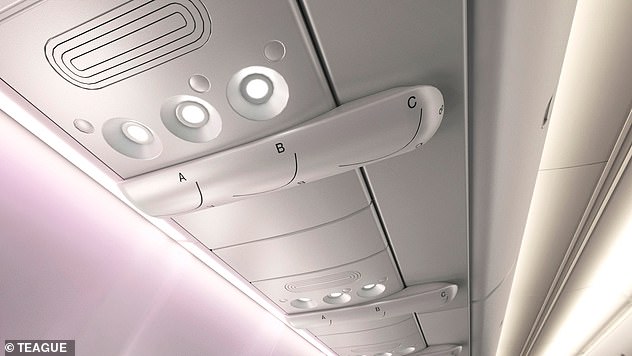 The curved shape of the ‘blades’, Teague argues, maximizes the efficiency of the existing system and creates protection between neighbouring passengers as well as row to row.

Discomfort is minimized, meanwhile, by the air blade being positioned around, versus on, the passenger.

Teague argues that while airlines already operate stringent sanitation and cleaning processes, mandate the wearing of face masks and have Hepa filters that ensure very clean recycled air – there is still room for improvement.

The use of face masks is ‘limited to passenger adherence and fluctuates due to physical discomfort and the need to eat and drink’ it says, so controlling sanitation is difficult in busy cabins.

The design for AirShield, which is now entering its engineering development phase in anticipation of ‘rapid deployment’, is the result of ‘a series of computational fluid dynamics simulations’ that evaluated how particles move around cabin environments. 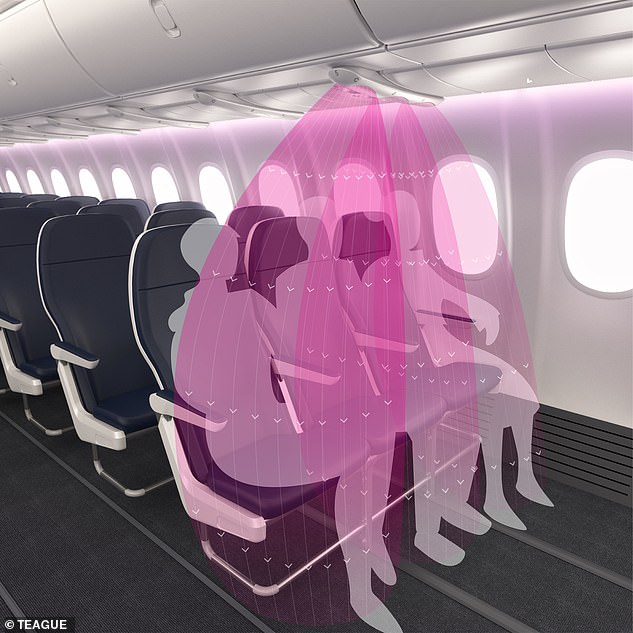 Teague says: ‘The enhanced interpersonal protection that AirShield is set to deliver will be a valuable tool for the industry in the quest for a cleaner, safer cabin’

The results ‘demonstrate the potential to re-direct the spread of exhaled respiratory particles’.

Anthony Harcup, Senior Director of Airline Experience at Teague, who co-invented AirShield, said: ‘In an aircraft environment, airflow… plays the most significant role in the spread of a virus. By engineering the cabin airflow to manage each individual’s exhalations, passengers can have far greater peace of mind when seated nearby.

‘For many airlines, it is simply not commercially viable to reconfigure entire cabins to adhere to social distancing measures – especially in economy class where passenger density is at its highest. A reconfigured interior would also not guarantee passengers the same level of protection from infectious droplets travelling through the cabin when compared to AirShield.’

Teague added: ‘Coronavirus and the use of masks will go away long-term. However, the world’s expectations for elevated hygiene post-pandemic will remain. The enhanced interpersonal protection that AirShield is set to deliver will be a valuable tool for the industry in the quest for a cleaner, safer cabin.’