Follow
Home » Travel » An Irish tourist in Rome defaced the Colosseum by carving his initials into the walls of the ancient structure, according to a report 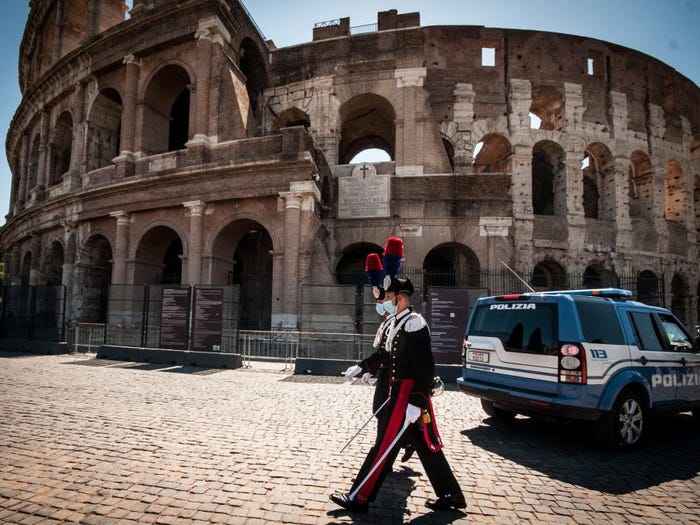 Private security at Rome's Colosseum on Monday caught a tourist carving his first and last initials onto a pillar of the 2,000-year-old structure, CNN reported.

Italy's Carabinieri police told CNN that the Colosseum's security team identified the tourist as a 32-year-old man visiting from Ireland.

The tourist, whose name has not yet been released, used a metal point to carve his initials about 2 inches high onto a pillar on the Colosseum's first floor. The Carabinieri police told CNN that the visitor is accused of damaging a historical and artistic landmark.

In Italy, damaging a historical or artistic landmark is a crime that could result in up to one year in prison or a minimum fine of $2,400 (€2,065).

Representatives for Italy's Ministry of Culture and Tourism, which oversees the preservation of artistic and cultural sites and property, did not immediately respond to Insider's request for comment.

"Carving one's initials, in addition to being a crime, seems to be a gesture of those who want to appropriate the monument. Better take a selfie!" archaeologist Federica Rinaldi told CNN of the Roman amphitheater.

The Colosseum reopened to tourists on June 1 after being temporarily closed for three months due to the coronavirus pandemic.

Monday's occurrence at the Colosseum is not the first instance of a tourist writing on the walls of the Roman amphitheater, which is a UNESCO World Heritage Site.

For example, in 2017, a Colosseum tour guide reported a visitor from Ecuador to police after seeing them carve the names of their son and wife, as well as the year "2017," on the walls of the monument, according to the Associated Press.

In 2015, two tourists from California were caught by police after they carved their initials onto a wall in the amphitheater and took a selfie of the inscriptions, the Guardian reported. A year prior, a tourist from Russia was given a four-month prison sentence and fined more than $23,000 (€20,000) after carving a letter into the Colosseum, according to the Guardian.

A recent example occurred in August, when an Austrian tourist at Italy's Museo Antonio Canova sat on the sculpture "Paolina Borghese as Venus Victrix" for a photo and broke two toes off of the monument, according to a post on the museum's official Facebook page.

Artnet News said that the tourist was attempting to take a selfie while sitting on the neoclassical sculptor Antonio Canova's plaster "Paolina Borghese as Venus Victrix" at the museum in Possagno, which is just over an hour outside Venice.

Insider's Monica Humphries reported that the tourist, whose name was not released to the public, apologized to the museum for the damage.

In recent years, officials in popular Italian tourist cities in Italy have enacted fines and rules in an attempt to control unwelcome tourism behaviors. In 2019, officials in Rome began implementing a fine of $450 for any tourists who sit on the iconic Spanish Steps, which were made famous in the 1953 film "Roman Holiday" starring Audrey Hepburn and Gregory Peck.

Tourists from outside of Rome were known to gather on the steps to eat and sit, but locals apparently weren't fond of the crowds of people that would cover the staircase, which was built in the 1720s.

Officials in Rome also extended the ban on sitting, gathering, eating, and drinking to other well-known tourist spots in the city, including the popular Trevi Fountain.