“I come here to read my poetry tonight as a black feminist lesbian poet,” said Audre Lorde, standing onstage in a dashiki and head wrap, to a mesmerized West Berlin audience at the Amerika Haus in June 1984.

At the time, the Wall was still standing, and the western part of the divided city was a hotbed of radical politics, Cold War angst and scrappy, state-subsidized bohemia. But it had never seen anything quite like Lorde, the poet, essayist and activist born in New York City’s Harlem to Caribbean parents in 1934, whose ideas about female rage, intersectional feminism and the political dimensions of self-care have perhaps never been as relevant or embraced as they are today. During Pride month in June, Lorde and her politics were frequently invoked, from acknowledgements at the Stonewall Inn rally in New York City to the official landmarking of her Staten Island home.

The 1984 trip was the first of many extended visits Lorde would make to Berlin, a city she depicted in poetry and prose, where she played a pivotal role in the birth of the Afro-German identity movement in the years before she succumbed to liver cancer in 1992 at age 58. Since her death, Lorde’s momentous influence on the American left has become clear. But she also lives on in today’s Berlin, now a truly international city grappling with what it means to be pluralistic and humane. 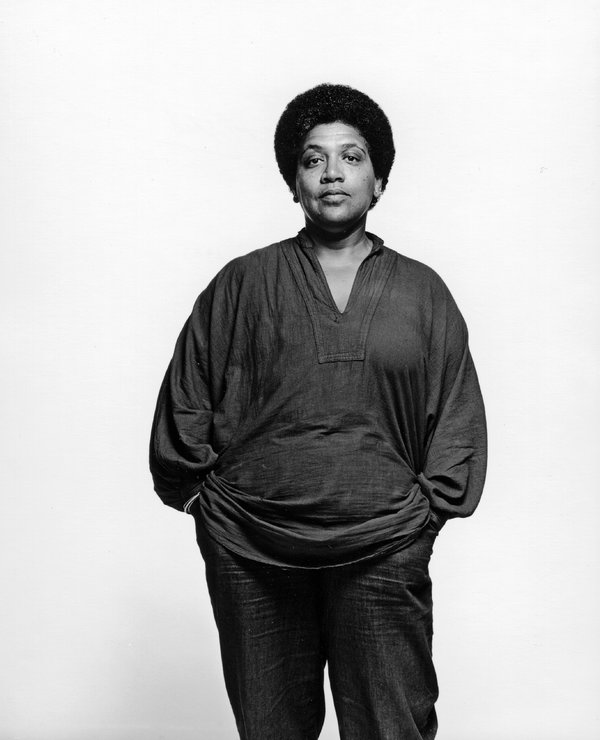 “The city itself is very different from what I’d expected,” Lorde wrote in her journal in June 1984. “It is lively and beautiful, but its past is never very far away, at least not for me.” She went on: “The silence about Jews is absolutely deafening, chilling. There is only one memorial in the whole city and it is to the Resistance.”

The past is still close in Berlin, but Lorde’s second observation seems almost inconceivable today. The Resistance memorial at Plötzensee, which inspired her 1984 poem, “This Urn Contains Earth from German Concentration Camps,” is now one of the least known Holocaust memorials in a city full of them — most notably the Stolperstein project and the Memorial to the Murdered Jews of Europe by Peter Eisenman. What would Lorde have thought to see the Amerika Haus, where she gave that first public address, on a recent night, as visitors filed into the modernist structure to view photographs of Holocaust atrocities, part of an exhibition on images of death? Since 2014, the Amerika Haus has been home to C/O Berlin, one of innumerable local venues now featuring the kind of culturally diverse, socially engaged material that Lorde often found lacking.

Where to find Lorde today

The best starting place for any Lorde pilgrim is audrelordeberlin.com, a comprehensive English-language website created by Dagmar Schultz, a German sociologist and publisher who helped secure Lorde a visiting professorship at the Free University of Berlin in 1984. The two women would become close friends, and Ms. Schultz recorded copious footage of Lorde’s time in Berlin, which eventually became a 2012 documentary, “Audre Lorde: The Berlin Years 1984-1992,” screened regularly in art house cinemas in Berlin and beyond. The film and its supporting material, including photographs, interviews, letters and posters, now form the basis of the Free University’s Audre Lorde Archive, which can be viewed by appointment at the campus in Lankwitz. Much of this material is also on the website, as is an interactive map of significant locations.

During her first stay, Lorde lived in a red apartment building that still stands at Auf dem Grat 26, overlooking Thiel Park, a sloping stretch of green marshland near the university in the lush, villa-laden western district of Dahlem. The yellow phone booth that used to stand on the park’s edge figures in her haunting 1984 poem, “Berlin Is Hard on Colored Girls,” which mixes the language of border crossings with imagery evoking the African diaspora: “I cross her borders at midnight / the guards confused by a dream / Mother Christopher’s warm bread / an end to war perhaps … A nightingale waits in the alley / next to the yellow phone booth…”

Through her lectures and workshops in 1984, Lorde began to connect with young German women of African descent — women like May Ayim and Katharina Oguntoye — who would later play important roles in what became known as the Afro-German movement. It was Lorde who coined the term, “Afro-German,” as she encouraged the women to tell their stories and forge an identity. The resulting co-authored 1986 book, “Farbe Bekennen,” translated into English as “Showing Our Colors,” tells the story of black German women reaching back to the Middle Ages, a story that had largely been ignored in the national discourse up to that point. 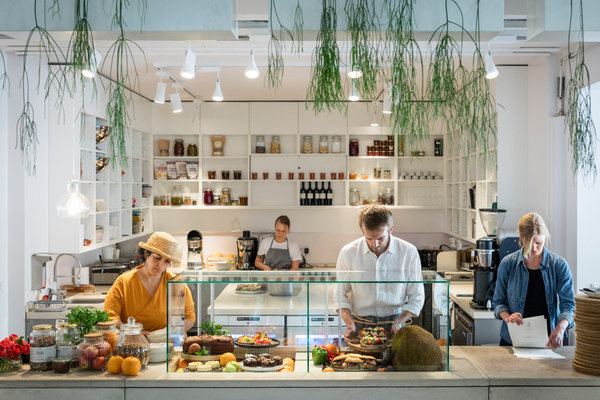 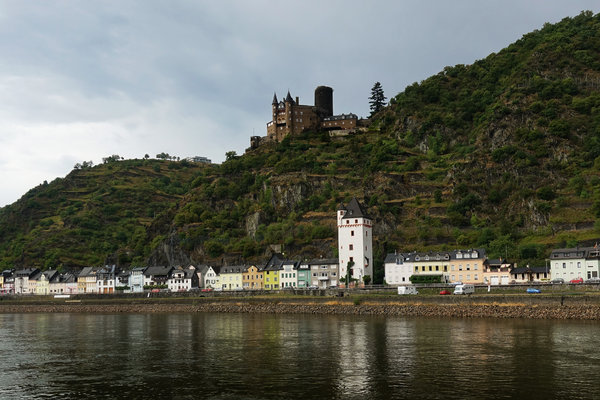 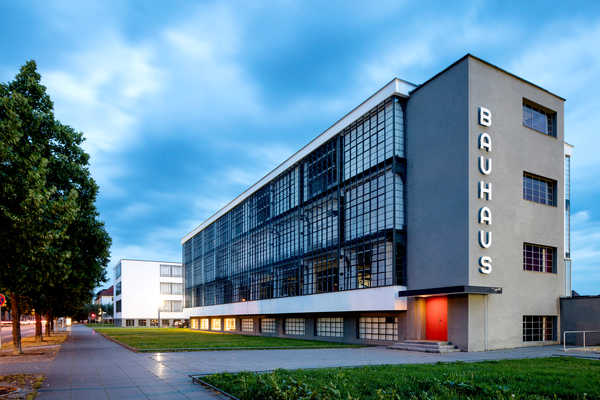 “I am excited by these women,” Lorde wrote in a journal entry that became the book’s forward, “as they’re beginning to say in one way or another, ‘Let us be ourselves now as we define us. We are not a figment of your imagination or an exotic answer to your desires.’”

“Showing Our Colors” and the debate that arose around it, resulted in the founding of two organizations devoted to Germans of African heritage, the women’s group ADEFRA and the Initiative of Black People in Germany (ISD), both of which are crucial resources today in the wake of the refugee crisis.

One of the ISD’s current initiatives, in cooperation with the Berlin Green Party, is the renaming of one of the city’s streets after Lorde. That street is yet to be determined, but visitors can already walk the May-Ayim-Ufer, named for one of Lorde’s most important protégés, a poet, educator and activist born to a German mother and Ghanaian father, who helped found ADEFRA and the ISD before taking her own life in 1996. The willow-lined May-Ayim-Ufer, which was previously named after a 17th-century Prussian colonialist associated with the slave trade, runs along the Kreuzberg side of the Spree River, opposite the longest remaining stretch of the Berlin Wall in one of the most diverse, left-leaning areas of the city.

The forest, the lakes and other Lorde haunts

But it’s farther west where Lorde spent most of her time. Alone, with her partner, Dr. Gloria Joseph, or with the entourage of women that had begun to coalesce around her, she loved to explore the city’s bucolic western edges, a part of Berlin that has changed less dramatically since the 1980s than much of the rest of the city.

One of her favorite walks is likely much as it was then: through the sprawling Grunewald forest, where Nabokov once hunted butterflies and wild boars still roam under the towering pines, to the Châlet Suisse, a traditional Swiss restaurant in the middle of the woods still popular for its rustic surroundings and Alpine fare, and on to the Jagdschloss Grunewald, a striking lakeside 16th-century hunting lodge that is Berlin’s oldest preserved palace, home to its most extensive collection of work by the German Renaissance painters Lucas Cranach the Elder and Younger.

Lorde also loved the wooded lakes west of the Grunewald in Zehlendorf — Schlachtensee and Krumme Lanke — both of which still fill up on summer days with sun-seeking Berliners, many entirely in the buff. “Don’t you think that’s a uniquely Berlin phenomenon?” Lorde asks in a clip from the Audre Lorde Archive, while eating an ice cream cone against a backdrop of sunbathing Krumme Lanke nudists.

In an earlier still image from the archive, taken when she still had a thick head of hair, she rows an inflatable boat over the lake, wearing a red T-shirt emblazoned with a quote by the anarchist Emma Goldman: “If I can’t dance I don’t want to be part of your revolution.”

Lorde held true to Goldman’s credo. Even as she grew increasingly ill, she was a fixture on the lesbian bar scene that thrived in the 1980s, particularly in the district of Schöneberg, often dancing until dawn at bars like Die Zwei (Those Two) and Pour Elle (For Her). Both closed years ago, with the last of the city’s 1980s-era lesbian bars, Serene, shutting its doors for good in 2015. Yet today Berlin abounds with lesbian parties. And even if the city’s night life still lacks the ethnic diversity of Paris or London, there are far more women of color involved in the scene now — something Lorde doubtlessly would have celebrated.

Only one of her former nocturnal haunts remains: Begine, a Schöneberg cafe and cultural center founded in 1986 by female squatters that hosts workshops, classes, concerts and other events; Lorde rented an apartment in the building in 1988. The district of Schöneberg, with its antiquariats, Jugendstil fronts and tacky gay bars, was where she spent much of her time when she returned to Berlin in the late 1980s and early 1990s, often for readings and events organized by Orlanda, her publisher. One of her favorite spots was the open-air farmers market that still takes place every Wednesday and Saturday on Winterfeldtplatz.

After the Wall fell, Lorde was one of the first Western writers to give a reading in the former East, appearing in 1990 at the Frannz-Club in a converted red brick brewery in the district of Prenzlauer Berg. The original Frannz-Club, a seminal East Berlin music venue, was forced to close in 1997 because of rising rents, but it reopened in 2004 under the same name as a restaurant, bar and Biergarten.

In her poem, “East Berlin 1989,” Lorde beat back against the Cold War triumphalism of the times with a dark vision of discord and racial violence, anticipating the surge of far-right hostility that would emerge in the reunified former East: “Already my blood shrieks / through the East Berlin streets / misplaced hatreds / volcanic tallies rung upon cement / Afro-German woman stomped to death / by skinheads in Alexanderplatz…” At a time when the far right is once again on the rise in Europe — and in eastern Germany in particular — the poem feels as trenchant as ever.

It was “East Berlin 1989” that Lorde read aloud at her final reading, which took place in September 1992 at the Schöneberg home of Dagmar Schultz, continuing to the end of her life to speak out for the disenfranchised. Two months later, she died on the Caribbean island of Saint Croix. One of the places her ashes were scattered, in accordance with her wishes, was the lake at Krumme Lanke.

“We all have to die at least once,” Lorde wrote in her journal while sitting in Dahlem’s Thielpark during that first fateful summer in Berlin, mere months after her first diagnosis of cancer as she began one of the most productive periods of her life. “For the first time I really feel that my writing has a substance and stature that will survive me,” she wrote. “There is a hell of a lot more I have to do. And sitting here tonight in this lovely green park in Berlin … I feel I still have enough moxie to do it all.”

A starter kit for escaping into the world.

52 PLACES AND MUCH, MUCH MORE Follow our 52 Places traveler, Sebastian Modak, on Instagram as he travels the world, and discover more Travel coverage by following us on Twitter and Facebook. And sign up for our Travel Dispatch newsletter: Each week you’ll receive tips on traveling smarter, stories on hot destinations and access to photos from all over the world.