Boeing has released a sneak peek of the new cabin innovations it will include on its ‘largest and most efficient’ jetliner yet.

The new generation 777X is set to be flown in testing for the first time this spring and airlines including Emirates, Lufthansa and Singapore Airlines have already placed orders for the aircraft.

And the US-based plane manufacturer has taken to Twitter to show what appears to be both economy and business class on board the plane and how they will look. 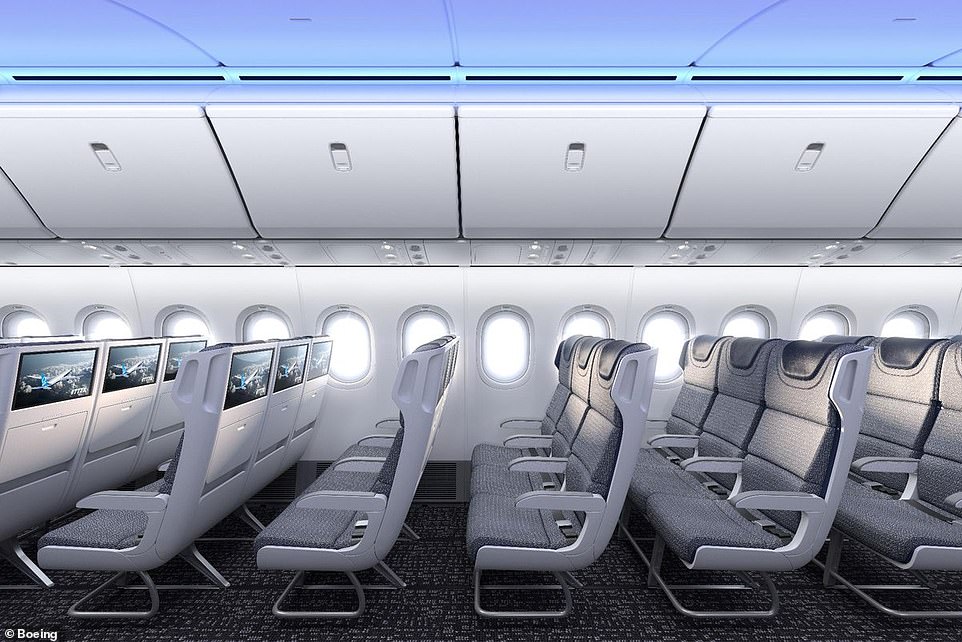 Boeing released this rendering on Twitter of what appears to be an economy class cabin on its new generation Boeing 777X aircraft. The manufacturer say the cabins will have ‘better cabin altitude and humidity, temperature, sound quality and lighting’ 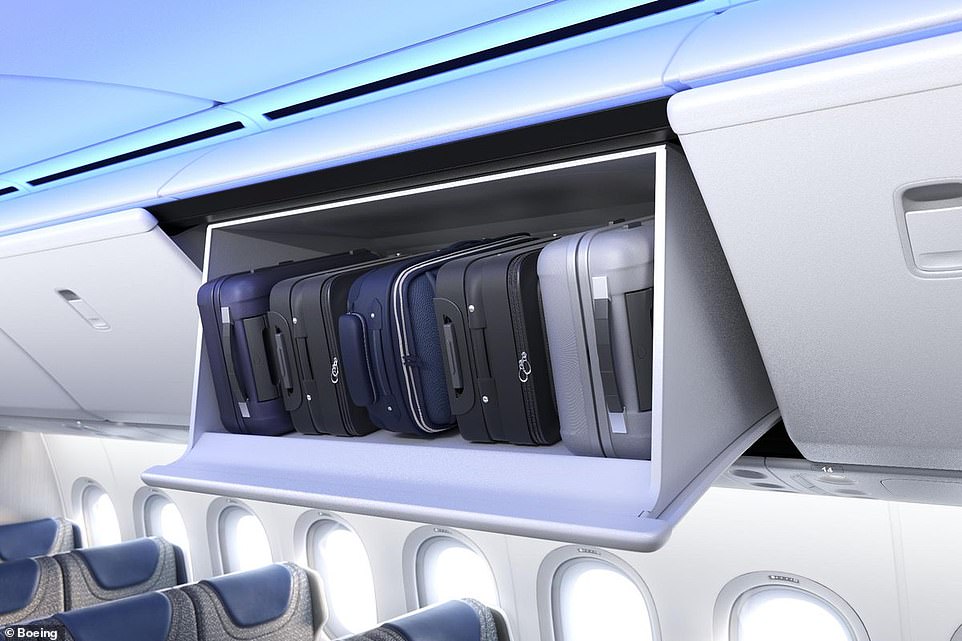 An image depicting the overhead lockers that are set to be installed on the aircraft, with Boeing explaining they are larger and provide more room for carry on luggage 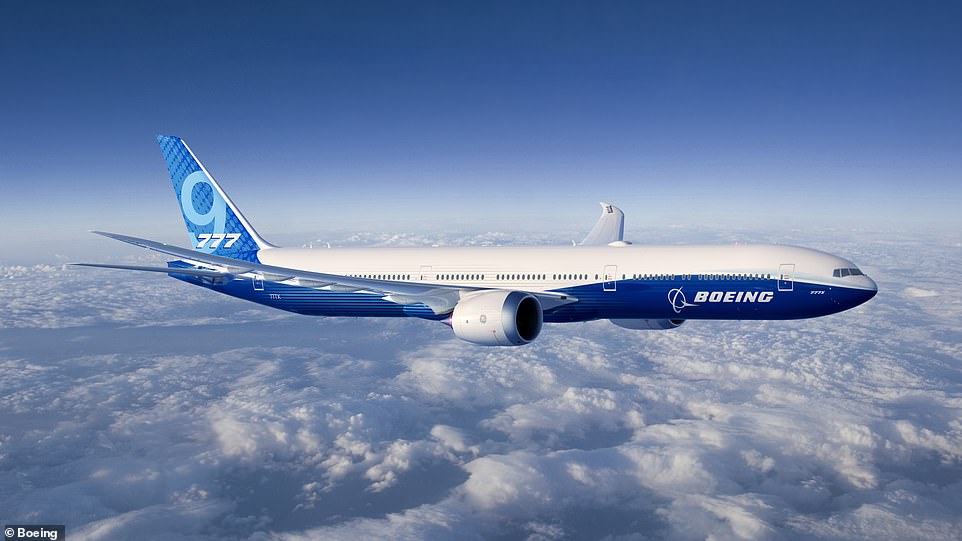 The new generation 777X, picture, is set to be flown in testing for the first time this spring and airlines including Emirates, Lufthansa and Singapore Airlines have already placed orders for the aircraft

The first picture was posted last week, and showed a rendering of what is thought to be a business class cabin, with large windows.

Accompanying the image, Boeing’s tweet said: ‘Take it all in! Windows on the #777X are larger and higher than the competition, giving everyone a view and more light no matter where you sit.’

A second rendering then showed a mock-up of economy, with the caption: ‘Just like the 787 #Dreamliner, the #777X passenger experience will leave you feeling refreshed with better cabin altitude and humidity, temperature, sound quality and lighting.’

While a third image depicted the overhead lockers that are set to be installed on the aircraft, with Boeing explaining: ‘Lose that luggage anxiety! Overhead bins on the #777X are larger, providing more room for your carry-on. Plus they are easier to access!’ 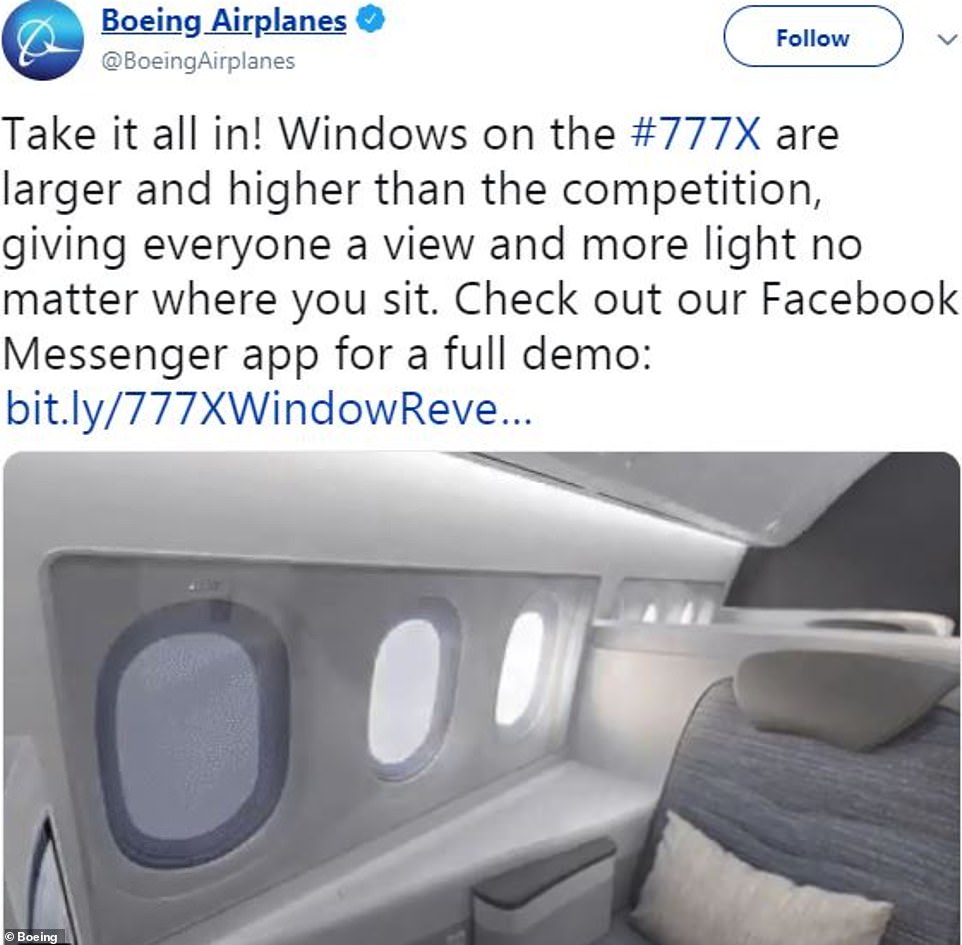 Boeing claims that the 777X will be the largest and most efficient twin engine jet in the world, with 12 per cent lower fuel consumption and 10 per cent lower operating costs than the competition.

Its features include folding wing-tips – the 235ft wings are the biggest Boeing has ever made, over 30ft longer than the current model’s wingspan – bigger windows and overhead bins compared to the current 777 and ‘advanced LED lighting’. 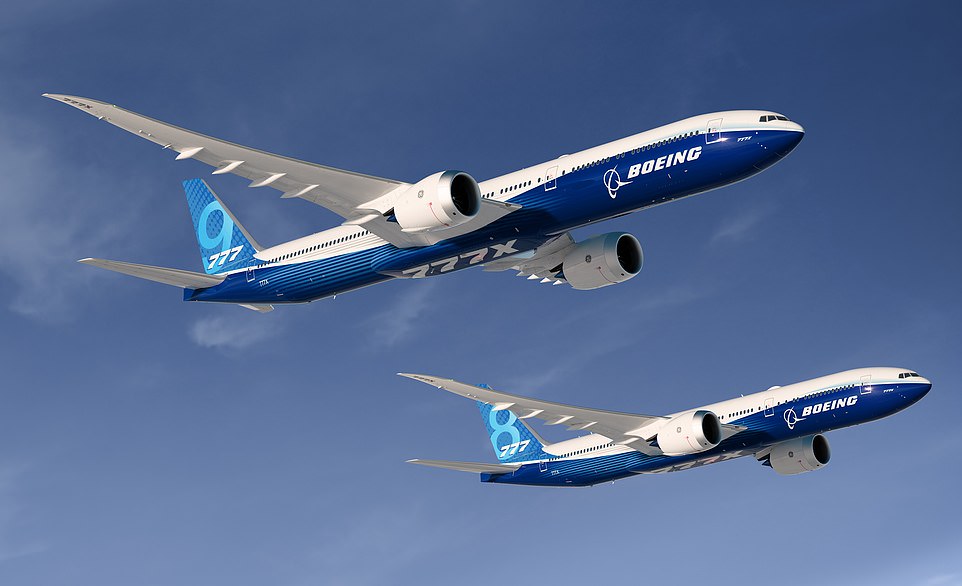 Although 777X testing has been underway since 2015 in lab environments, wind tunnels and simulations, a full-scale airplane is needed to verify the design strength and the accuracy of the analytical model used during design.

During previous static testing, wings have been tested at 150 per cent of the designated load, resulting in a wing flexing more than 26 feet.

Other carriers that have placed orders are All Nippon Airways, Cathay Pacific, Etihad Airways and Qatar Airways.

Boeing, cabin, innov, New, unveils
You may also like: