Couple transform old school bus into their dream home with working kitchen and bathroom for just £22,000

A COUPLE who wanted their dream home spent £22,000 renovating an old bus – which even has a working kitchenette and shower.

Harry Shaw, 28, and his partner Hannah, 26, from Perth, Australia first bought the Hino RG230 bus back in August 2018 and spent two years giving a 40ft school bus a complete makeover. 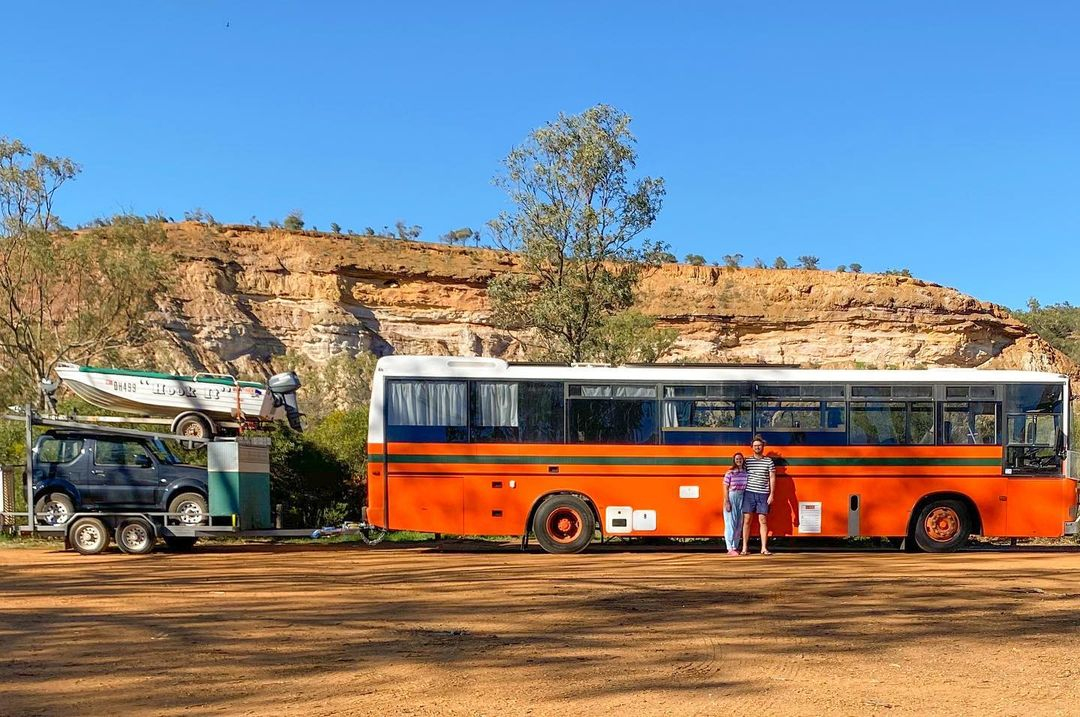 Harry and Hannah, who have been together for three years, had been living in rental properties before moving to their new house-cum-bus – and the clever move has seen them cut down on their monthly bills by £330.

“The bus was a school bus up until we picked it up. The first day we went and looked at it, it had just dropped off a group of school kids for an excursion.

“We loved the idea that we can have all the luxuries of a house and have the beach or forest right on our doorstep, and still get to sleep in our own bed every night and have a coffee from our coffee machine every morning.

“We also love being able to follow the seasons heading to the north of Australia to skip the cold winter.”

After watching hours of YouTube tutorials and enlisting the help of friends and family for design ideas, the couple started stripping the bus back to the bones before adding new features. 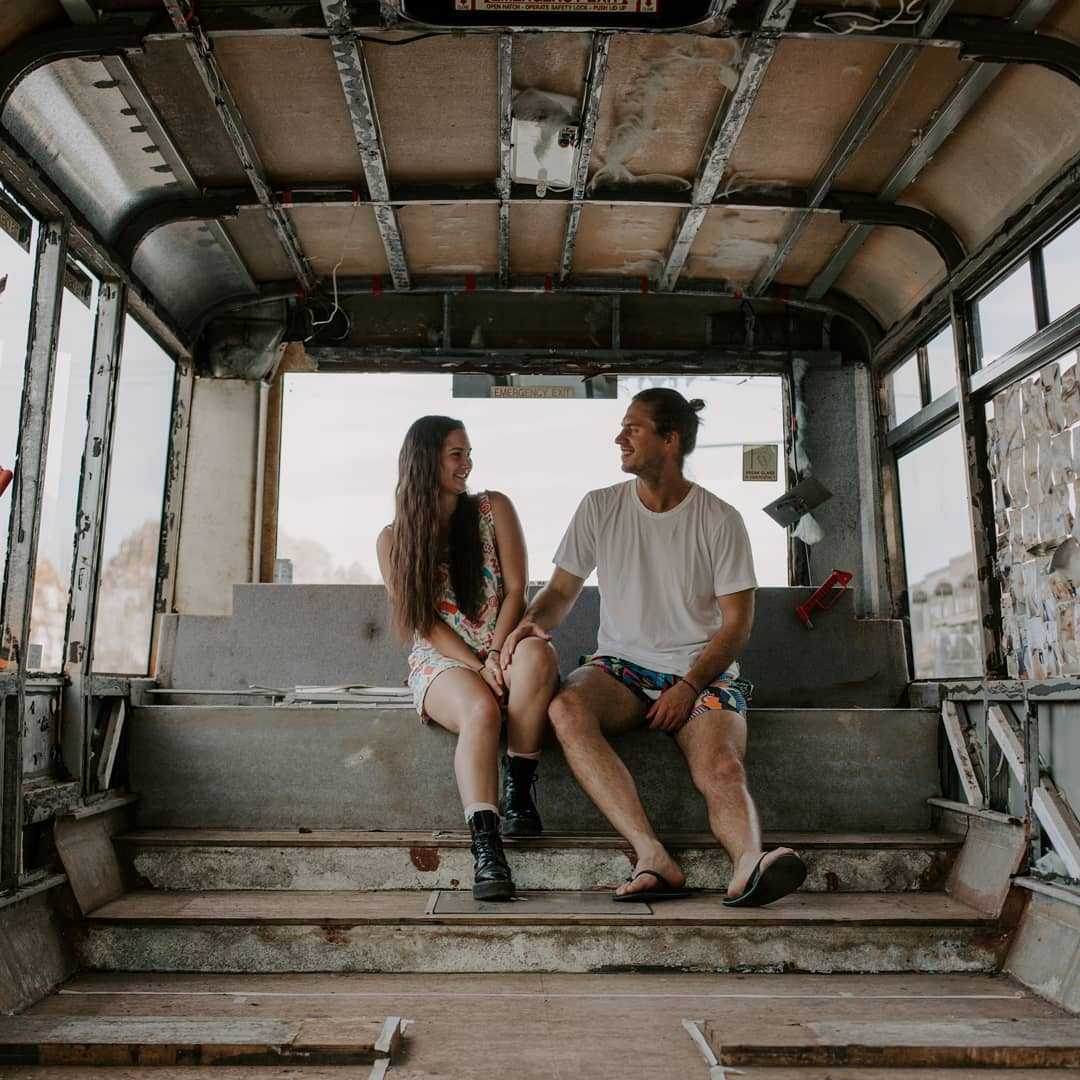 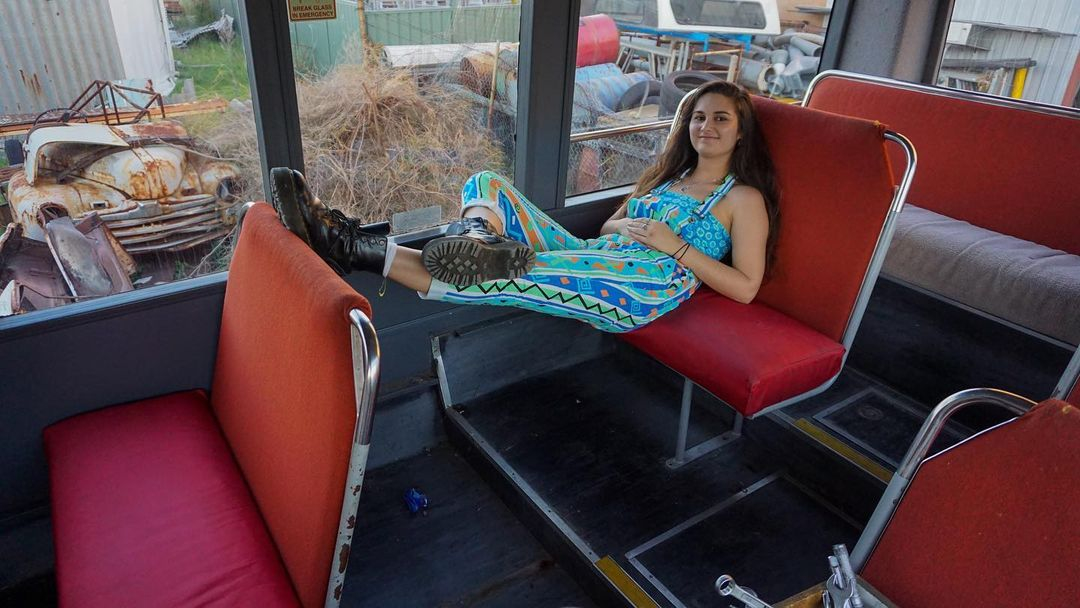 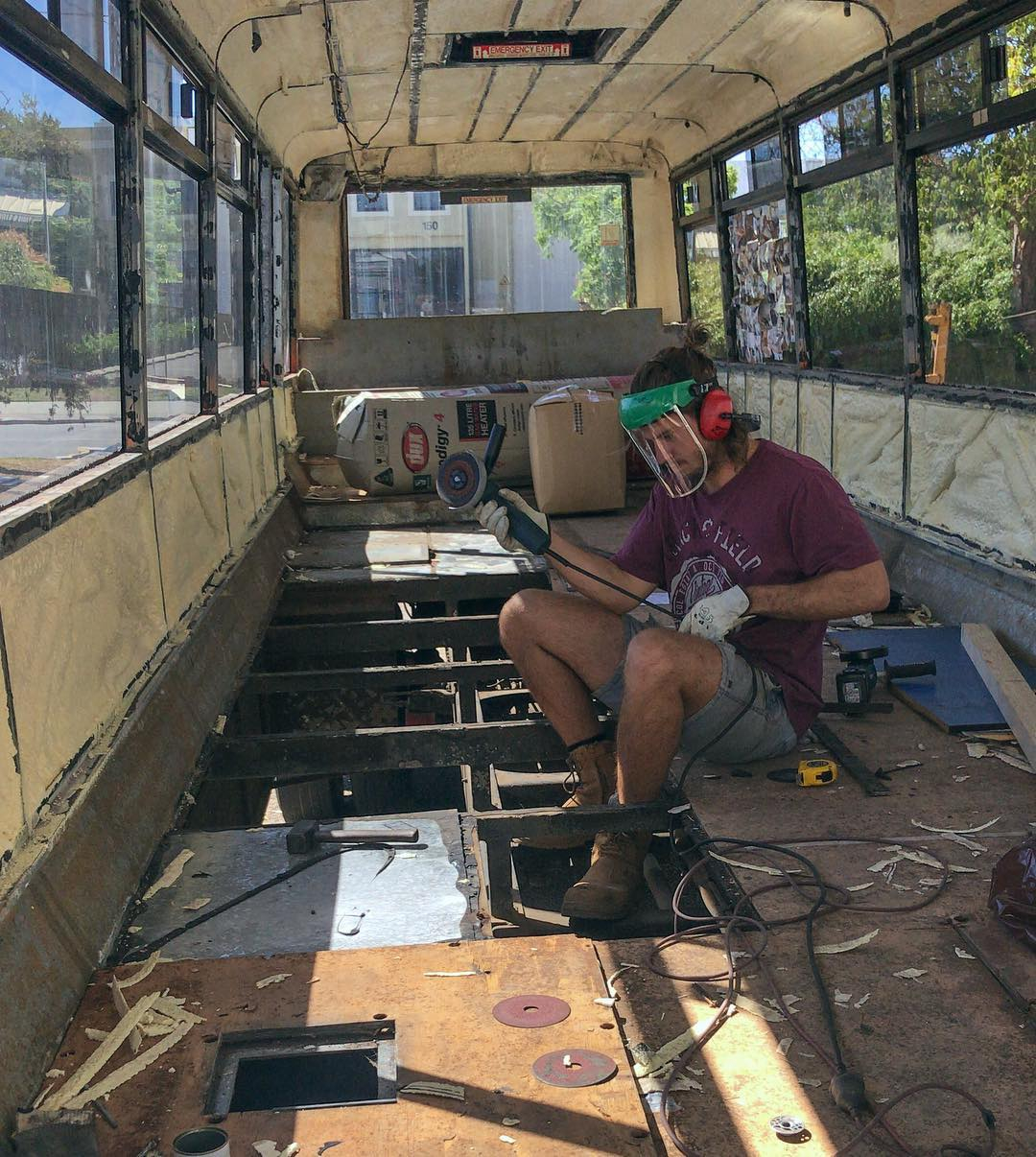 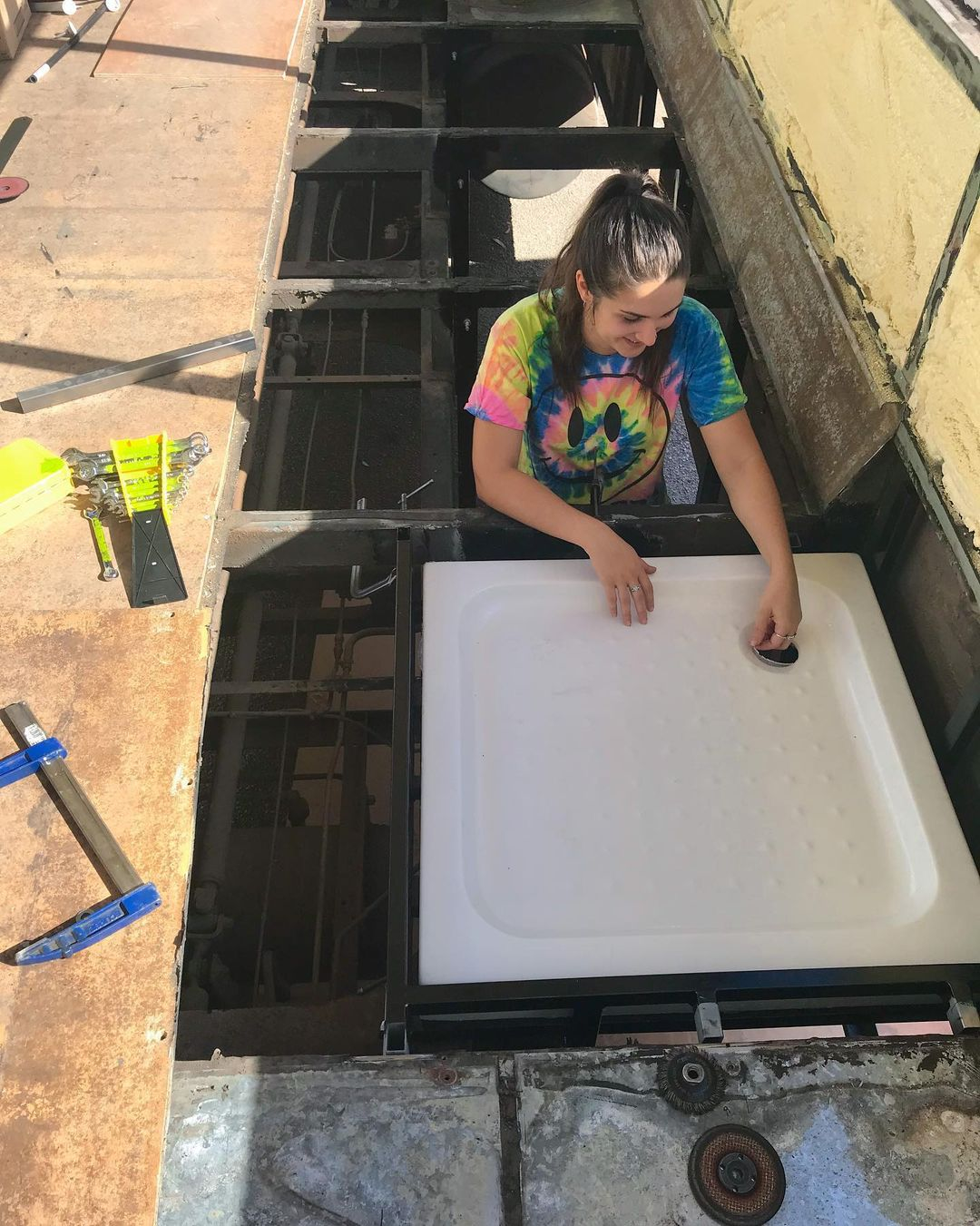 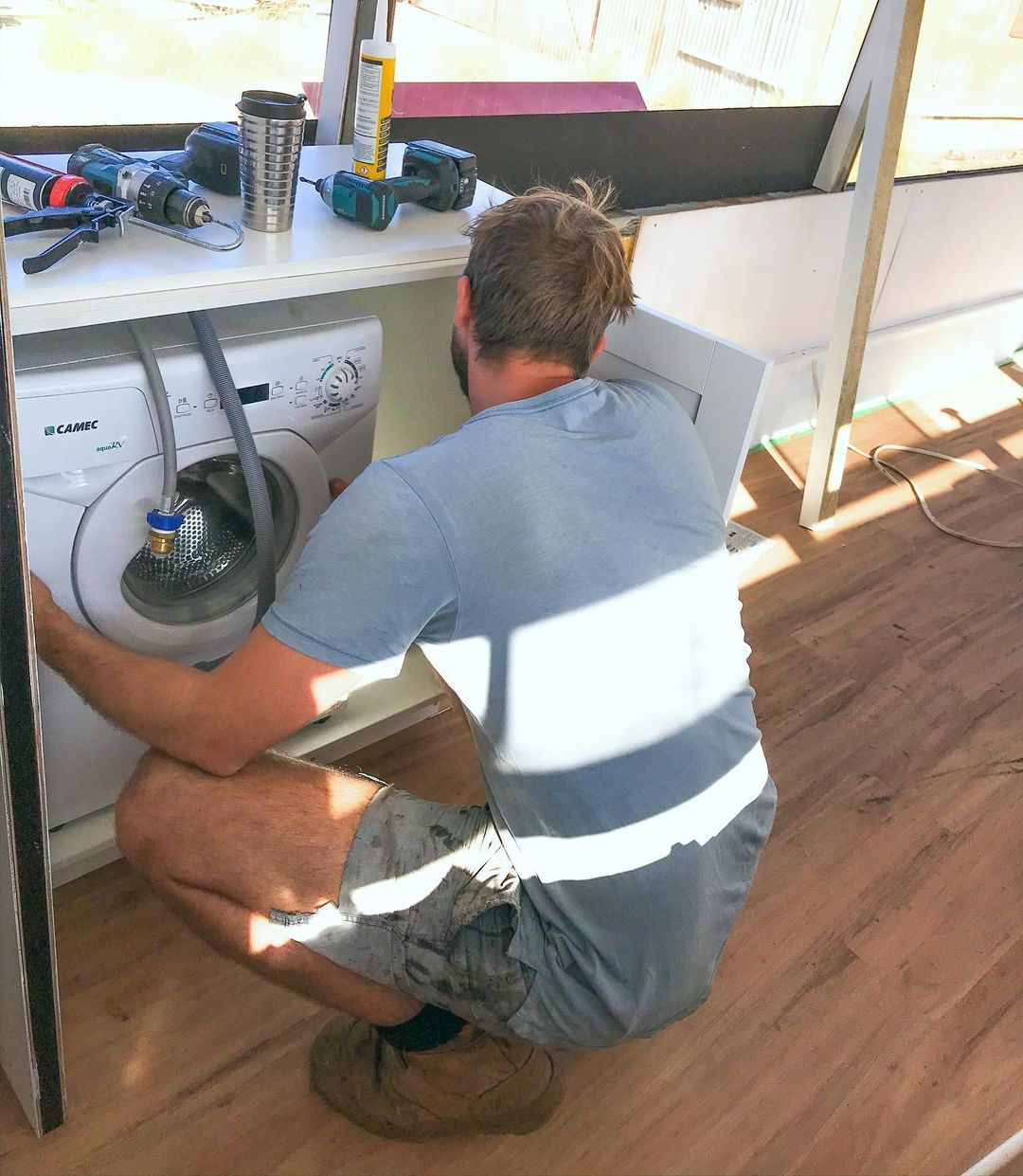 Harry said: “We sacrificed a lot of our spare time and social life in order to get it finished whilst also working at our jobs full-time.

“Every tiny little task we would estimate how much time it would take and it would drag out to four times as long as you would think."

Trying to keep their budget low and make the bus as homely as possible, they scoured second-hand shops and local boutiques for original items.

“It also took so much longer because neither of us had any idea about how to do anything before we started the project. We had to learn how to do everything.”

As for the construction work, Hannah and Harry put in floorboards, roof panels and walls, doing it all themselves except for installing electricity and gas. 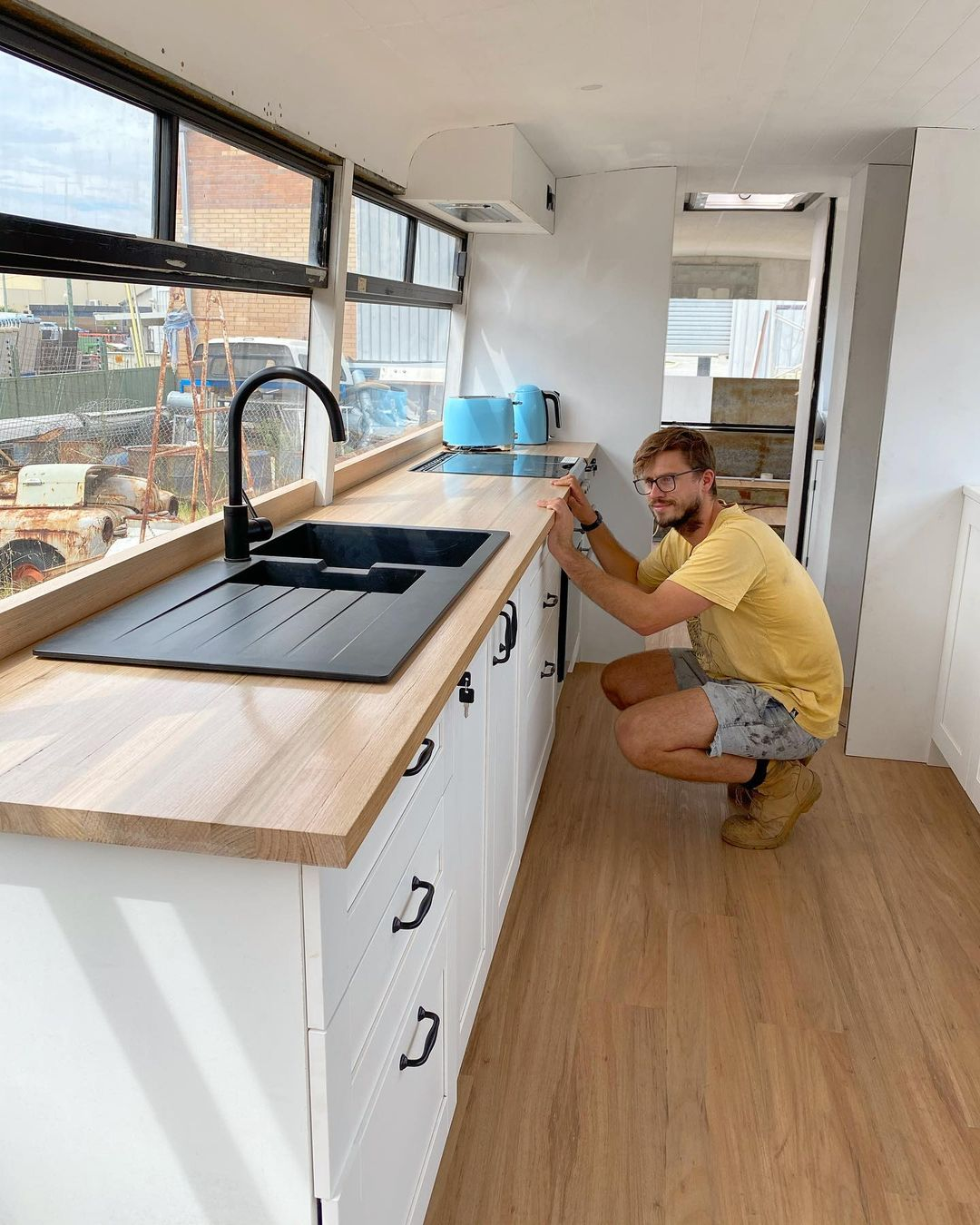 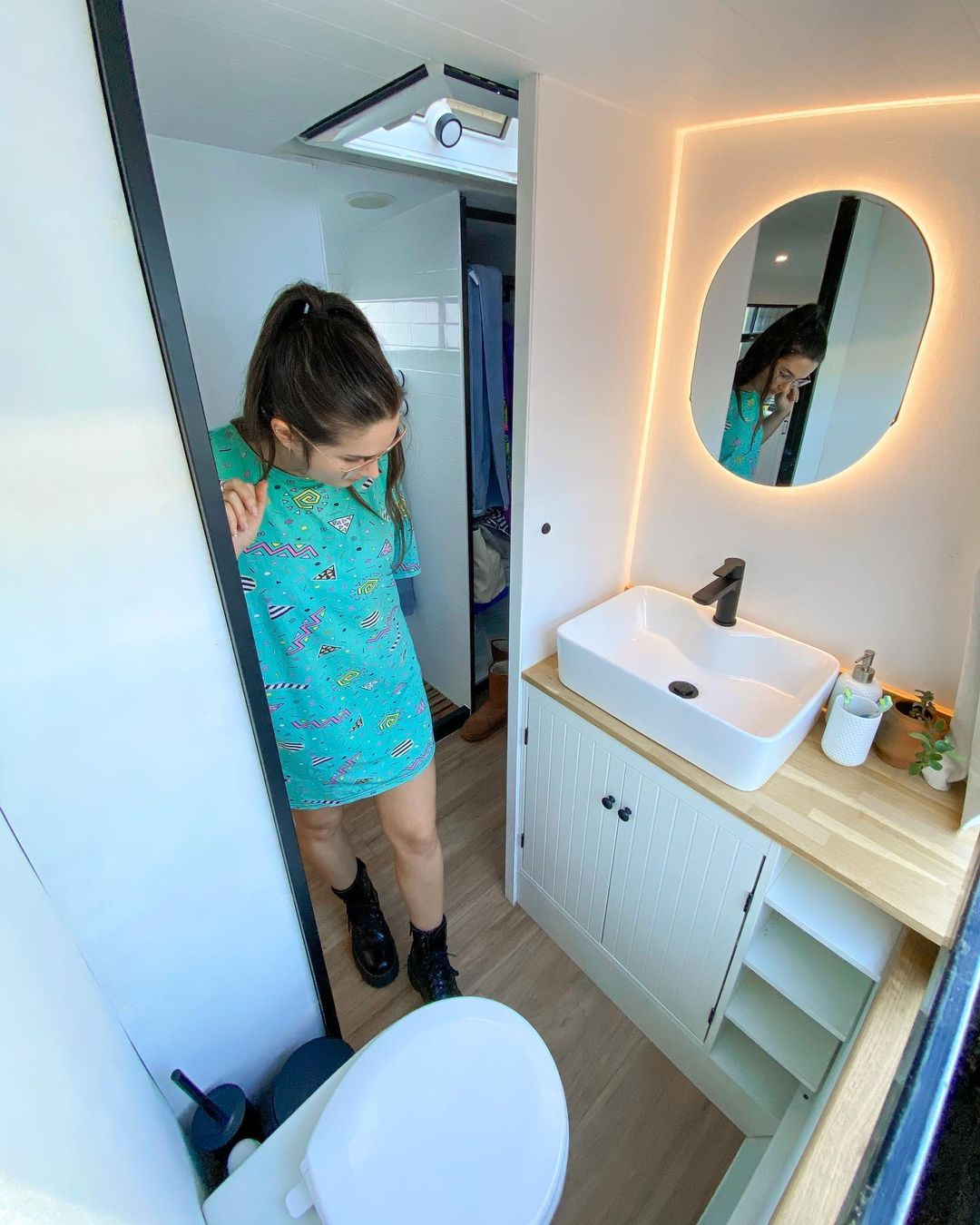 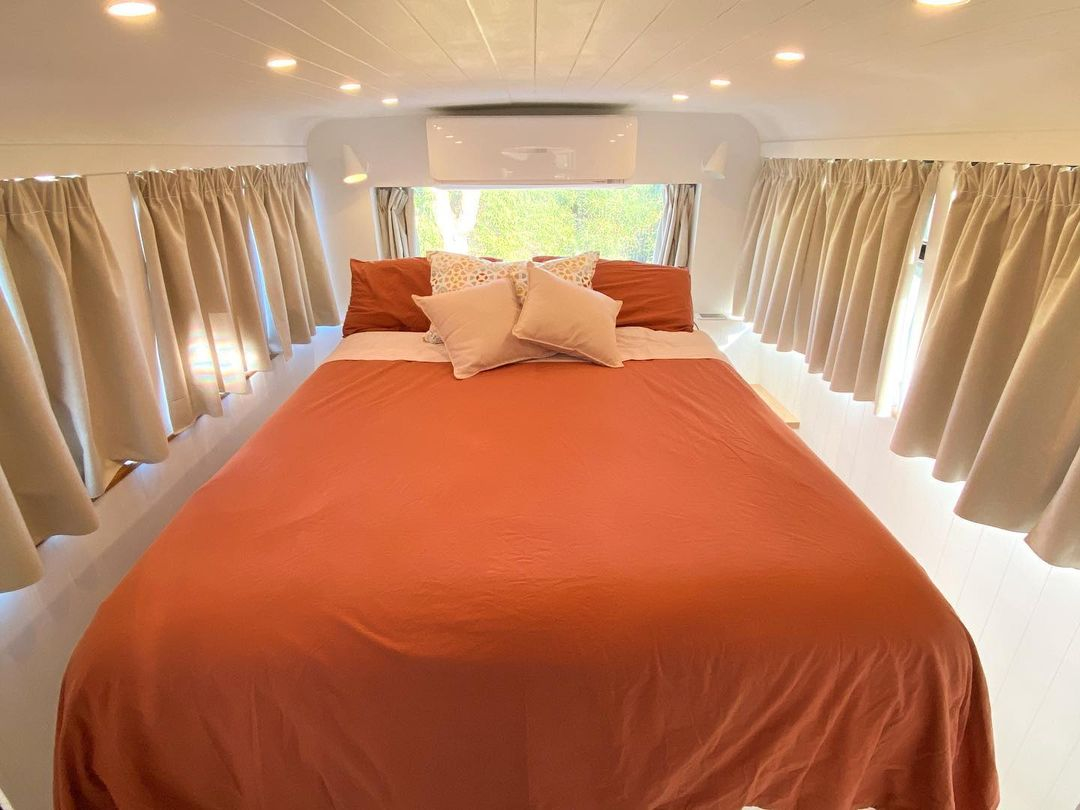 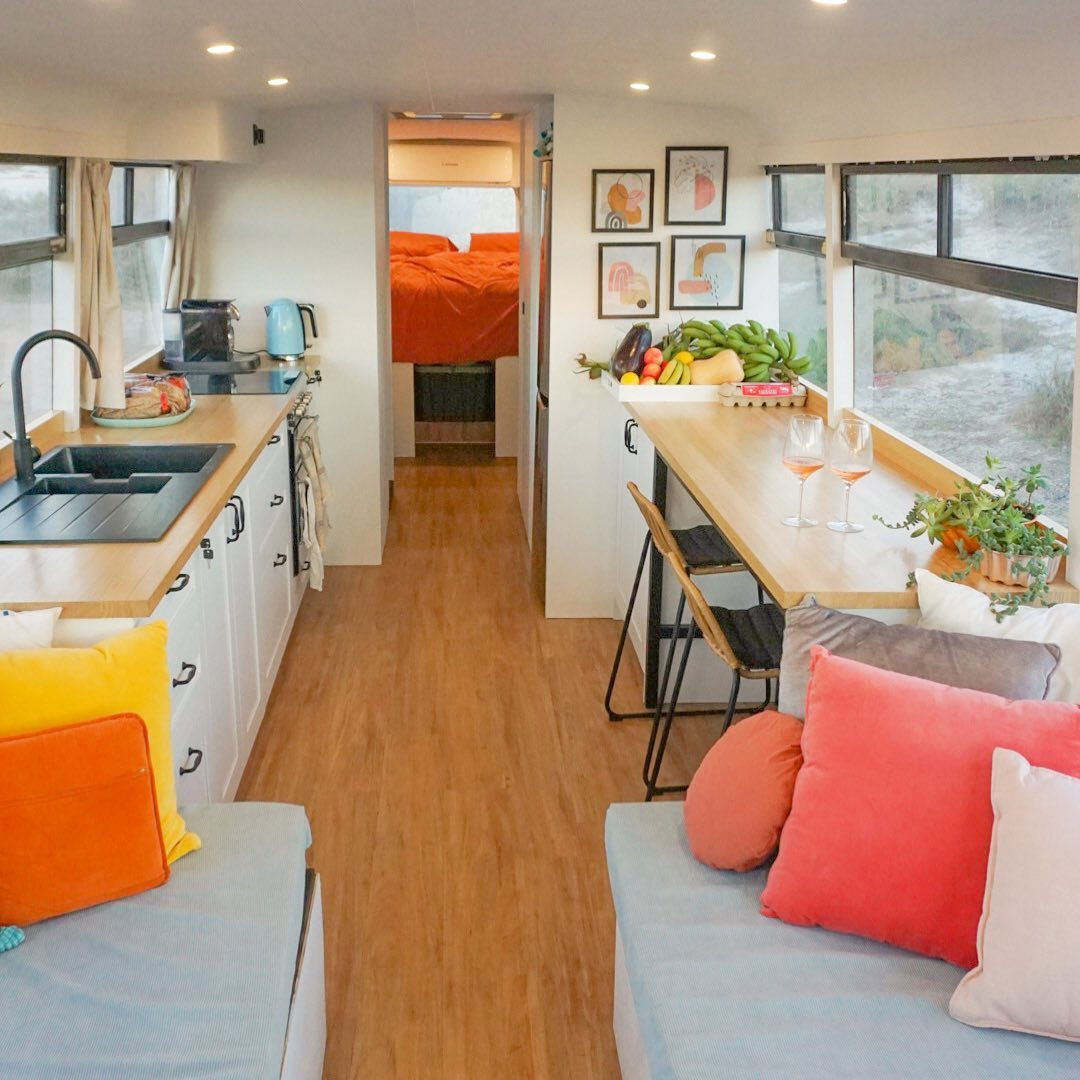 They have since gained 27,500 fans on their Instagram page showing their renovation.

“Starting at the back of the bus, we have a bedroom with a queen-sized bed which lifts up to access the storage underneath," Hannah, who works as a nutritionist, told Jam Press.

“From there, we have two wardrobes, a toilet with sink and separate shower on opposite sides of a hallway.

"We then have a full-sized kitchen with a gas oven and stove, a 310L household fridge, a cupboard that houses a washing machine and breakfast bar.

“Outside we have large storage lockers underneath for all our tools, toys and camping equipment. We also have an outdoor shower for washing off after the beach.

“Behind the bus, we tow our dual deck trailer where we store our dinghy and 4×4 Suzuki Jimny." 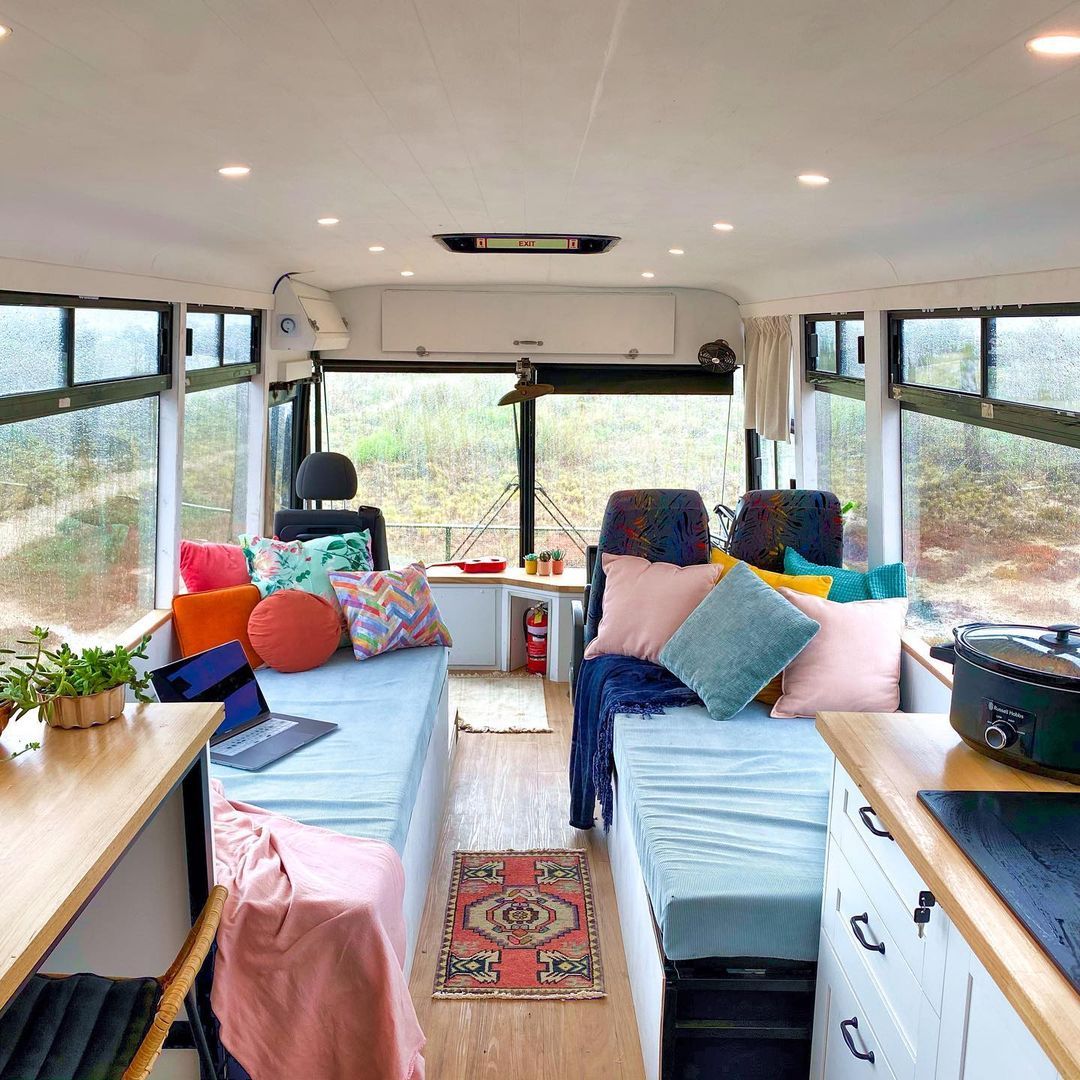 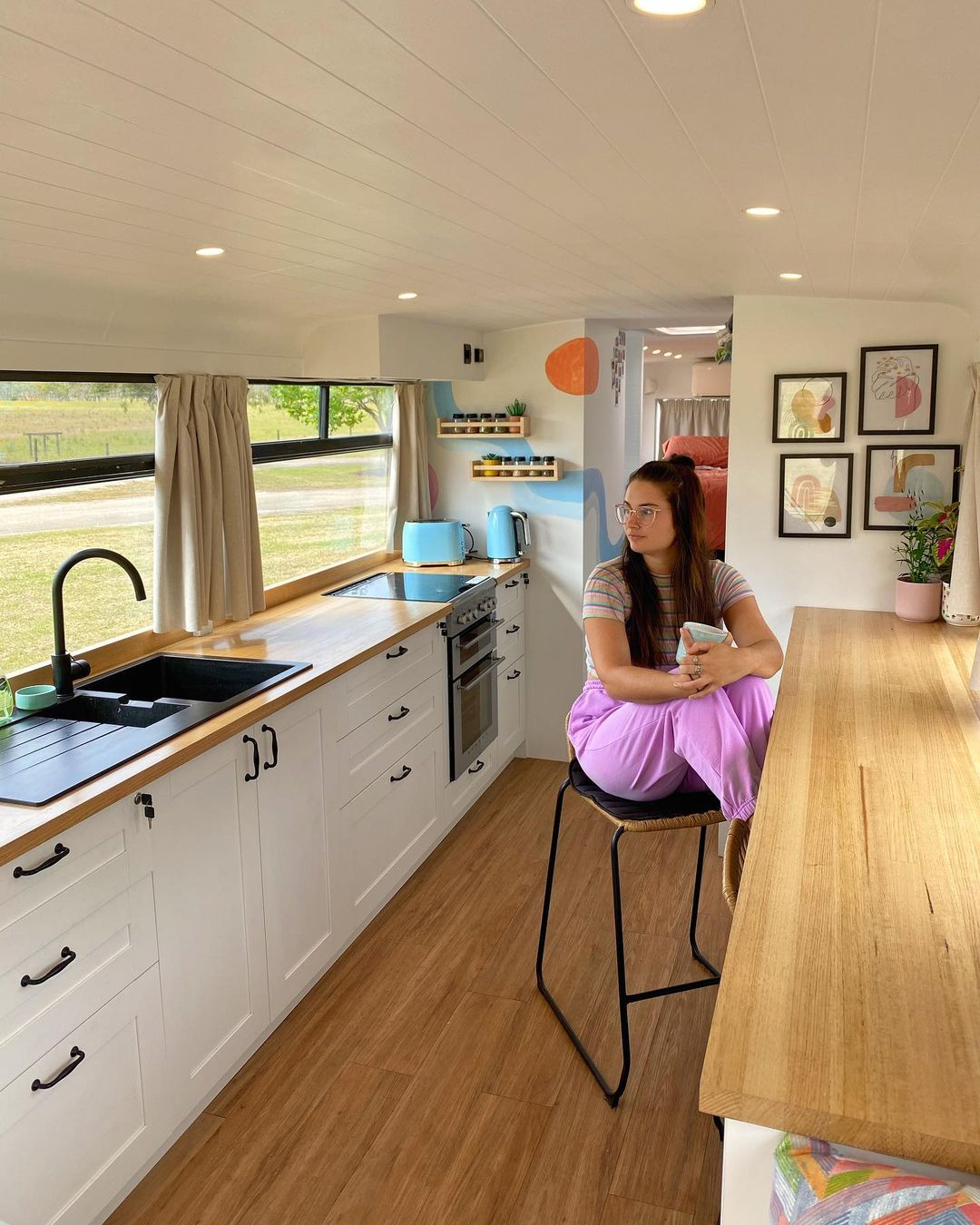 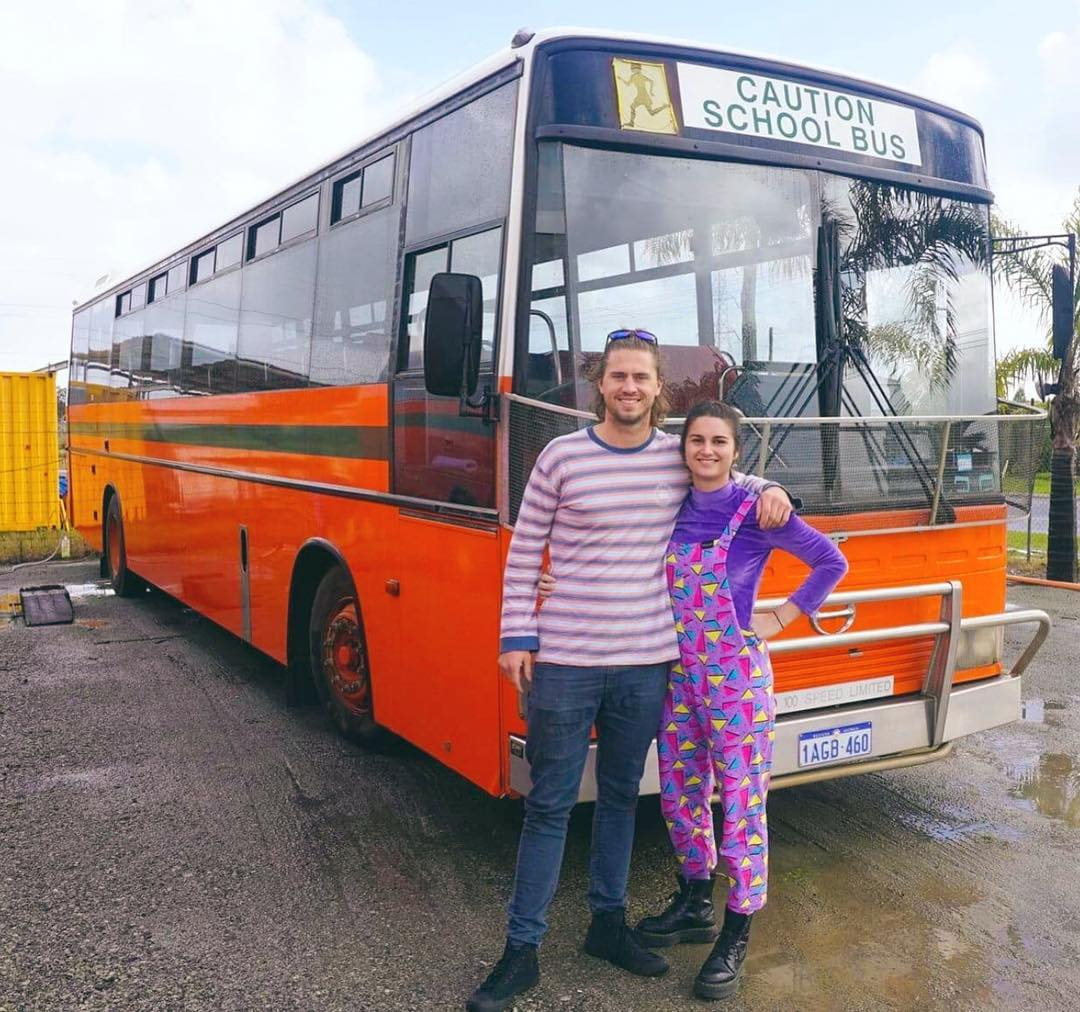 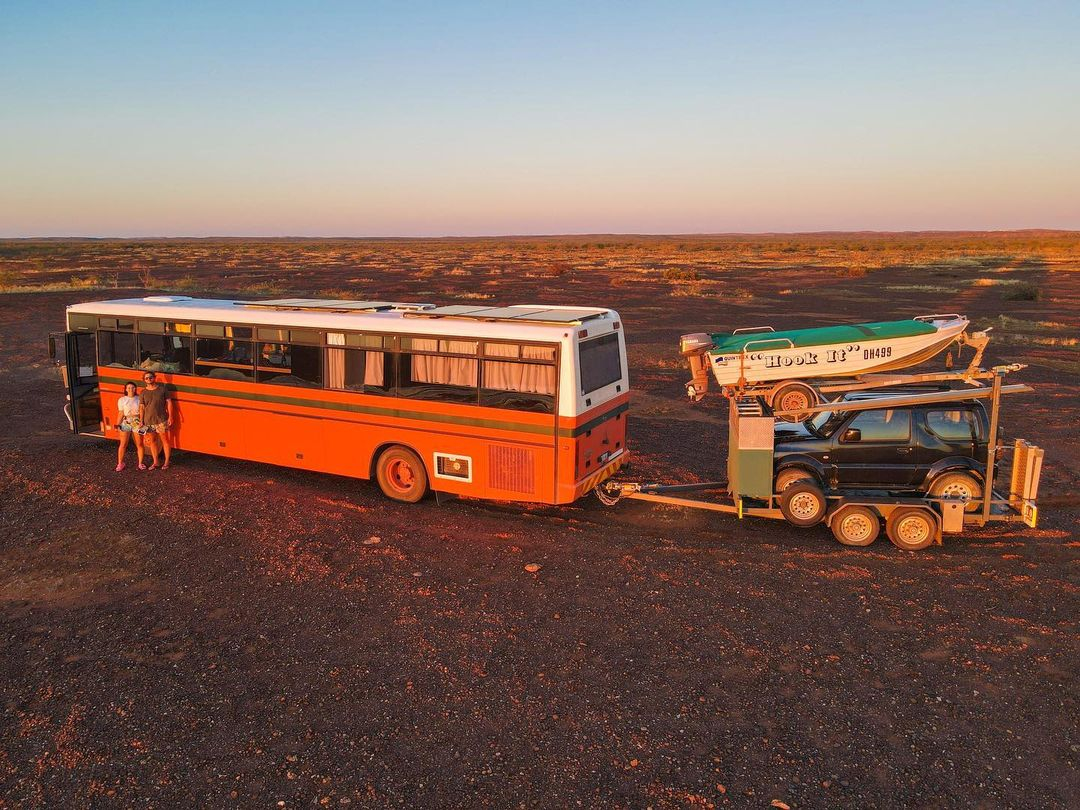 “We wanted to make sure we did everything right so that it would last and wouldn’t break when we were on the road.

One of the biggest advantages of living in the bus is that they have everything right there with them, without having to unpack and set up – and can travel whenever they want.

Harry said: “The ever-changing scenery and the new places to explore.

"We have the most amazing views right on our doorstep. We have also met some amazing people with amazing stories while we are on the road.

For people thinking of converting a bus into a home, the couple's top tip is to do research before embarking on this type of renovation project.

They said: “Do your research and get a good understanding of what sort of vehicle you want/need and what it is going to take to convert it.

“Try and find people in your area who are undertaking a similar project and chat to them for advice – Facebook forums are fantastic for this!

"Also, learn from other people’s mistakes. We spent years converting the bus so we feel it needs to be about that same amount of time living in the bus to make all our hard work worthwhile.”

Here are some of the best caravan and mobile home renovations, one of which cost just £198.

bu, couple, Old, school, transform
You may also like: