‘Engine crack’ caused British Airways fire at Las Vegas airport and the captain was to blame for the chaotic evacuation, say federal investigators

A crack in an engine caused a British Airways jet to burst into flames at Las Vegas airport while the captain – hailed as a hero at the time – was to blame for a ‘chaotic evacuation’, federal investigators said.

One flight attendant was seriously injured after fire ripped through the engine of the aircraft at McCarran International in September 2015.

All 157 passengers and 13 crew on board the Boeing 777-236ER jet, which was bound for London, were able to evacuate but the plane was substantially damaged by fire. 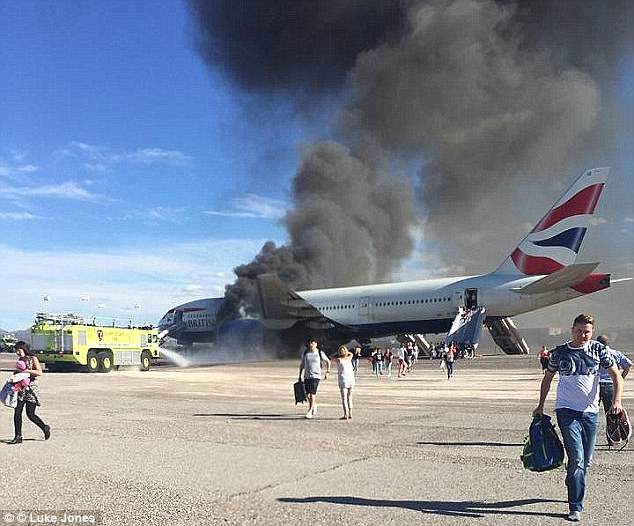 Yesterday, the US National Transportation Safety Board (NTSB) released its report into the incident, in which it blamed a fatigue crack in the left engine compressor for the fire.

The NTSB said the captain – Chris Henkey, from Reading, Berkshire – aborted the take-off just two seconds after the left engine failed and brought the plane to a halt within 13 seconds.

But it also blamed Henkey for the chaotic evacuation that followed.

After a fire alarm sounded, the captain called for an engine fire checklist, but it took him 22 seconds to follow the checklist’s order to close a valve that shuts off fuel to the engine.

Emergency services extinguish the fire in the aircraft’s engine. Yesterday, the US National Transportation Safety Board (NTSB) released its report into the incident, confirming the jet had a crack in the engine

During that time, Boeing estimated that 97 gallons of fuel spilled on the runway, helping to feed the fire.

The report also found that the captain called for an evacuation before completing an evacuation checklist. The checklist would have required him to shut down both engines.

But instead, the right engine remained on, which hampered the evacuation because it was blowing on the exit slides.

The report estimated that the right engine remained on for 43 seconds after the captain called for an evacuation – a relief pilot noticed and told the captain to shut it down.

The plane was only 55 per cent full, and the evacuation took two minutes and 32 seconds. 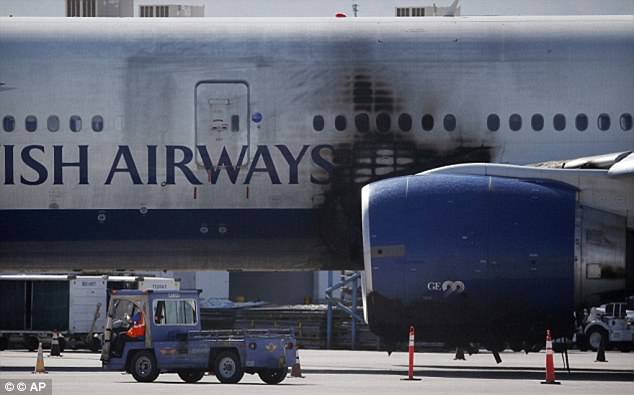 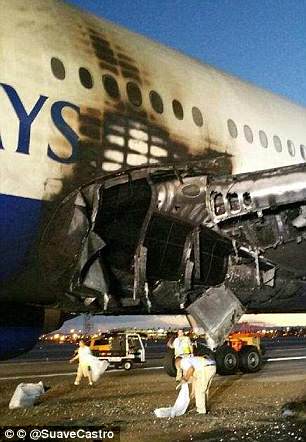 The fire was extinguished by emergency vehicles within five minutes of the left engine failure, the report said.

The NTSB also noted that some passengers evacuated with carry-on baggage, which could potentially slow the evacuation.

That’s an ongoing concern for the NTSB, which asked the Federal Aviation Administration earlier this year to study the effects of carry-on baggage on deplaning times.

But the NTSB noted that in the British Airways incident, flight attendants said many passengers grabbed their bags between the engine failure and the evacuation order, so the exit wasn’t slowed by baggage retrieval.

The report added that investigators were unable to determine the cause of the engine crack or when it occurred.

It said the crack in one of the compressor’s disks likely was visible during two separate maintenance procedures in 2008 and 2014, but went undetected because inspecting the disks wasn’t required.

The engine’s maker, General Electric Co., has since established procedures designed to catch cracks in the disk web.

The incident was one of several recent high-profile engine failures.

Earlier this year, shrapnel from an exploding engine killed a passenger on a Southwest Airlines Boeing 737.

A similar engine failure and explosion damaged the wing of a Southwest plane in 2016.

BA said in a statement: ‘We fully supported the NTSB investigation which did not identify any safety recommendations for British Airways.

‘The safety of our customers and crew is always our very first priority.

The travel companies doing their bit to lift our spirits

Following in the footsteps of William Wordsworth in the Lake District