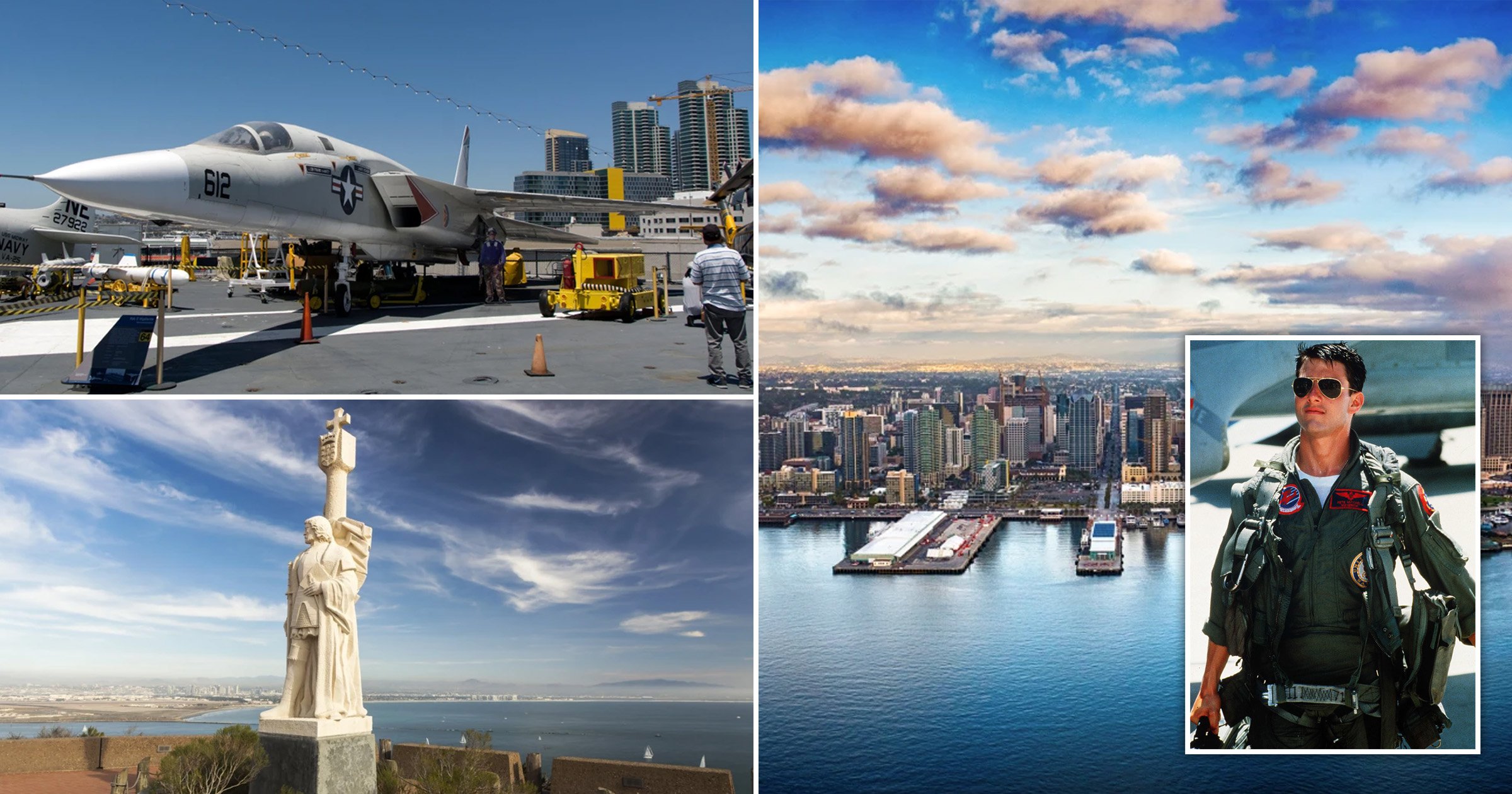 ‘So, if I felt the need, the need for speed, how fast could I actually go in one of these?’ I ask George, channeling my inner Tom ‘Top Gun’ Cruise.

The kindly volunteer is showing me around the Air and Space Museum in Balboa Park – the green lungs of this sunny Californian coastal city – and we have paused in front of a small-scale model of a US Navy aircraft carrier, complete with miniature fighter jets on its extensive deck.

George, an 80-something ex-naval airforce man answers matter of factly. ‘Well, some jets, like the F-28, can go from nought to around 170mph in just two seconds.’

Thanks to the very short ‘runways’ on board aircraft carriers – about 300ft, compared with commercial runways of 8,500ft and more – the jets essentially have to be launched from a giant catapult, which sounds terrifying.

This is basically how Cruise spent most of his time in seminal 1980s film Top Gun – when he wasn’t racing around on a motorbike or playing topless volleyball.

His character, Pete ‘Maverick’ Mitchell, is a cocky but fearless fighter pilot who applies to TOPGUN, the Navy Fighter Weapons School. After graduating, he decides to return as an instructor, which is where the film’s new sequel, Top Gun: Maverick, picks up 30 years later.

In the original, Maverick was flying F-14 jets, one of which was borrowed from this museum (film fact: Cruise didn’t pilot the jets himself – they were flown by a stuntman – but on his first flight in one with a professional, he reached for the sick bag).

I’m feeling queasy, too, as George explains how G-forces affect pilots at the top speeds of more than 500mph.

‘If they tried to turn their heads to see if there was an enemy plane behind them, they would get vertigo and probably pass out.’ The solution was that jets had rear-view mirrors fitted inside the cockpit.

In search of more facts, I set off for the USS Midway, a giant 1,000ft aircraft carrier that came into service in 1945 and was eventually decommissioned in 1992. Now a museum (tickets from £21), it features all the sexy jets you could wish for – my favourite has a cartoon shark’s teeth painted on its nose – along with thick wire cables placed at intervals.

These, a former fighter pilot who volunteers here tells me, are what stop the jets when they come back into land.

The planes have a hook underneath, which has to try to catch the cable – not easy at 150mph.

Another retired pilot recounts the time he was being catapulted for take-off but wasn’t going fast enough, so had to eject.

He landed in the sea to see his carrier coming straight towards him. Thankfully, he managed to swim out of the way.

I exit via the gift shop – touting Ray-Ban Aviator sunnies and Cruise-style leather flying jackets – and make my way up to the Cabrillo National Monument on Point Loma.

Commemorating explorer Juan Rodríguez Cabrillo, the first European to land on the west coast of the US, in 1542, it sits on a high viewpoint overlooking both Coronado Island and the city’s main naval base.

As military planes zip by in the distance, all this adrenaline is making me hungry so I head to Kansas City Barbecue, a diner with a dive bar feel where a key scene from Top Gun was filmed: Maverick and his best buddy Goose belting out You’ve Lost That Lovin’ Feelin’ to Kelly McGillis.

San Diego, you’ve definitely given me that loving feeling…

The city’s hottest new opening, devoted to all things related to comic books and pop culture.

Expect workshops, industry pros and exhibitions on everything from Star Trek to Spider-Man.

Located on Coronado Island, this hotel dates back to 1888 and has
just undergone a $400million renovation.

It was used as a location for Marilyn Monroe movie Some Like It Hot and hosted countless celebs.

Set within the Liberty Arts District – a series of galleries and workshops located in former navy barracks – this food market is home to vendors who serve anything from Vietnamese pho to fried chicken sandwiches.

This boasts several LGBT+ hotspots, including the Hillcrest Brewing Company – which claims to be the first gay brewery in the world – and nightclub Rich’s, Don’t miss coal-fired dinner at Trust.

This water park is – you’ve guessed it – themed around Sesame Street.

It features 18 rides and water attractions, as well as a musical play area and character shows.

Top Gun: Maverick is in cinemas from Friday.

Flights to San Diego from £456 return with British Airways; rooms at the Kona Kai resort on Shelter Island from £234pn. Tickets to Air and Space Museum cost £18.65.