Groom arrested before honeymoon vacation for having loaded gun in carry-on bag: TSA

A Virginia groom made a costly mistake when packing his honeymoon carry-on bag, according to the Transportation Security Administration.

The man, who remains unidentified, was reportedly arrested on Saturday for having a loaded 9 mm handgun in his carry-on luggage at the Richmond International Airport, the TSA shared in a press release.

A TSA officer detected the handgun at a security checkpoint and found that it was loaded with eight bullets and had one in the chamber. The man’s belongings had gone through the checkpoint’s X-ray machine.

Airport police were alerted about the firearm and responded to the checkpoint. The handgun was confiscated while the Dinwiddie County man who had packed it was arrested.

The man was originally scheduled to fly to Hawaii with his wife for their honeymoon. He reportedly told officials that he had forgotten that he was in possession of the loaded firearm. 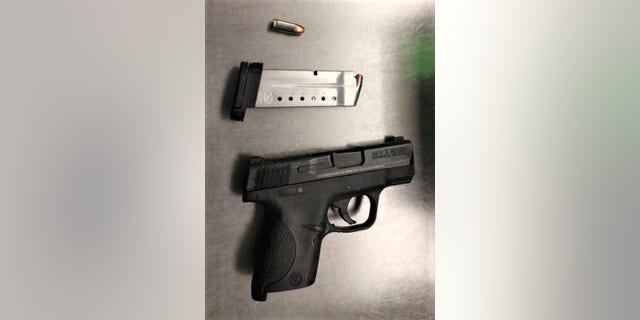 On Nov. 14, a loaded handgun was detected by the TSA at Richmond International Airport. (Transportation Security Administration)

It is not clear whether the man has been released or permitted to continue his journey.

Representatives at the Richmond International Airport did not immediately respond to Fox News’ request for comment.

“When you’re packing for a flight, my advice is to make sure that your baggage is empty when you start to pack to ensure that there is nothing prohibited in it,” said Chuck Burke, the TSA’s Federal Security Director at the Richmond International Airport, in a statement.

The TSA as a whole has seized more firearms in the last year than previous years. In 2019, there were 4,432 firearms found in carry-on bags nationwide, which was notably up by 5% from the year prior. Eighty-seven percent of those detected firearms were loaded, according to the TSA’s internal data.

At Richmond International Airport, there have been 18 guns found by the TSA so far, which is tied with how many were discovered at the same airport for the entire year of 2017.

The TSA has a thorough webpage on how to transport firearms and ammunition by air. The federal agency also encourages travelers to contact their chosen airline to ensure they have packed these items properly.

A civil penalty in the form of a fee can be issued by the TSA, which can range between $4,100 and $13,669 depending on the circumstances. Civil penalties can also be be applied to travelers who have concealed carry permits.

Inside the Sandals resort in Grenada

A joyful Kent Alps bike ride to a brilliant bolthole