All great odysseys start with a vision. Ours was to take on the supersized scenery of Alberta, land of cowboys and mountains, riding the range like pioneers before us.

Here, you’re at one with nature, waking to peaks a-blaze with sunrise as you stumble sleepily out of your… motorhome. Cheating? Maybe. But who needs a harmonica and a hard floor when you have a double bed and a fridge?

At Rafter Six ranch, in Exshaw on the fringe of Banff National Park, you’re as close to wild camping as you get in the Canadian Rockies. 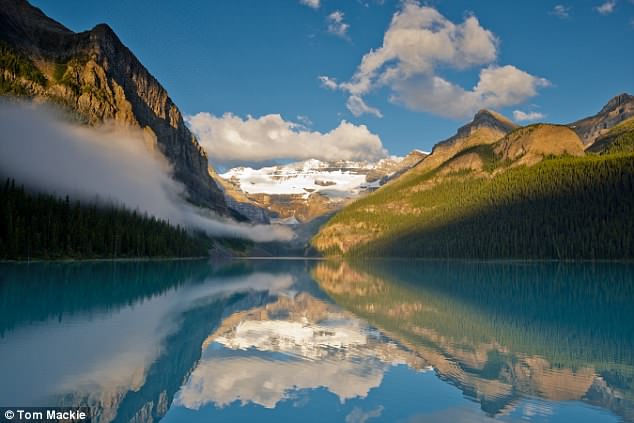 Wild and wonderful: A view over the still waters of Lake Louise

We’d thrilled to a herd of horses thundering past as we’d driven in from Calgary the previous evening, and parked our motorhome up in a back field.

Around us in all directions was nothing but vast space and whispering fields of long grass. We raised our mugs of instant coffee to a cowboy, loping along the trail through the field back to the corral and breathed in the spirit of adventure.

The ranch itself is run by the Cowley family, including the first female winner of the Calgary Stampede, Kateri Cowley, who’ll teach you to ride western-style, crack a stock whip and lasso if you ask nicely. She demonstrated by catching her dog Cowboy by the leg at full run the next morning. We roped a more obliging tree trunk called ‘stumpy’ instead – a satisfying thing to master before breakfast.

From Rafter Six it’s an hour to Banff, the ‘gateway to the Rockies’ – but the town of Canmore, en route, offers cheaper groceries to stock up on and a hipster-meets-lumberjack vibe I imagined was probably Banff’s before popularity sterilised it. 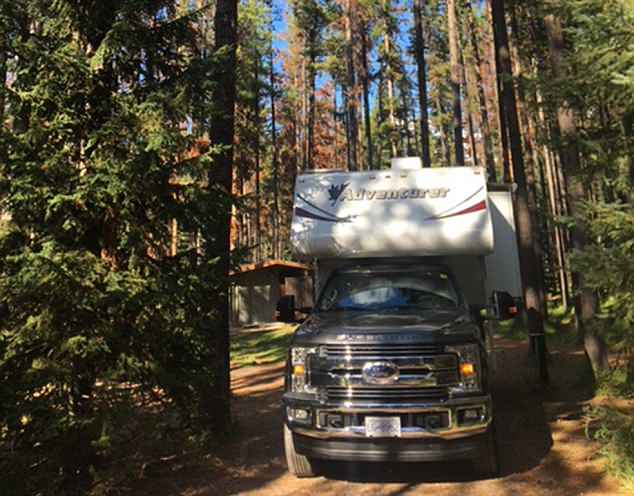 A motorhome gives you freedom of the road, but camping is strictly controlled within the National Parks, and it pays to research your sites before committing, lest your campfire cookout fantasy be dashed.

A fair few – like Village 2 Campground at Banff – are big on power hook ups and shower blocks, but otherwise characterless lots to park on overnight while you visit Lake Minnewanka or Banff Upper Hot Springs. Smaller ones such as Castle Mountain Campground offer a more rustic alternative, but with fewer amenities.

Banff itself has plenty of camping alternatives, such as the Moose Hotel and Suites, full of blond wood, open fires and rooftop hot tubs that offer steam and scenery. Or you could just keep your motor running and head out on the highway to the next big stop, Lake Louise, via ‘scenic route’, the Bow Valley Parkway.

Driving through the national parks, even in high season, is a strangely empty feeling; foot down along long, rolling roads, funneled by mountains, weather-sculpted and striated with limestone and shale, that seem to take hours to pass.

Remember to keep your windows rolled up and never feed an animal, the guides say, although even with our eyes peeled we hadn’t managed to spot anything bar a few goats beside the road. The best time to see animals is early in the morning apparently, when, without human interruption, they edge out of the big green expanses.

It’s another reason that jet lag works to your advantage in Alberta. At 5am you’ll also be wide awake enough to see vast star-filled skies – and in summer first light is both prime animal spotting and the only time you won’t be surrounded by crowds at popular lookouts. Where they all come from is a mystery, certainly not the four or five motorhomes we met out on the road going the opposite way every day.

At Lake Louise, sunrise edged in spectacular fashion over the turquoise water and mountains, watched by a handful of people wrapped in blankets or out on the water in kayaks. We were really looking for bears though, and everyone recommended Lake Louise Gondola for grizzly sightings.

A 15-minute chairlift over impenetrable green yielded some spectacular views of the Rockies, a postage stamp amount of the total of this 1000-mile range we realised looking at the map. Dangling above them in silence was a moment of Zen – but the wildlife was still hiding.

‘Did you see Gloria and her cubs?’ asked a diner waitress later that day. I must have looked crushed. ‘Come back in spring’ she advised kindly, pouring me a refill.

We forged on, over the Saskatchewan River Crossing and past the vast Columbia Icefield into Jasper National Park.

The 3.5-mile-long Athabasca glacier hangs between two peaks on the border of the parks like a vast wet towel, but the Skywalk lookout and trips onto the ice by all-terrain vehicle are expensive and busy – better to enjoy the view from the road, or hike the many trails here and let the area surprise you. 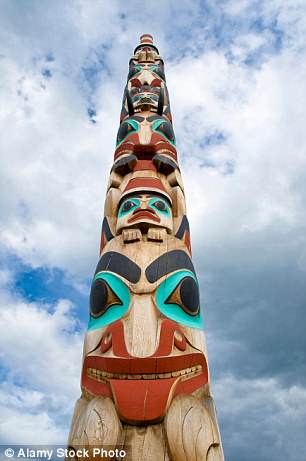 In fact, it’s the unexpected detours off the snaking highway that are the most interesting, like the shallow roadside lake where we picnicked and pretended to walk on water or the churning Sunwapta Falls, around which hiking trails snaked off into mysterious green wilderness.

Even with our wildlife spotting track record, responsible backcountry hiking means taking bear spray, which we hadn’t picked up, so we returned to the car park to make lunch instead – the benefit to driving your kitchen around with you.

Jasper itself, 180 miles north of Banff, is a relaxed, railroad town, full of coffee shops, backpackers lazing on the green and outdoor theatre performances in warmer months, overlooked by a Haida totem pole. Less commercial than Banff, it also has some pretty campsites nearby including Whistlers. Turning off the highway into it we caught a flash of grey and a pair of amber eyes looking directly at us. A lone wolf, standing by the road. On the I-Spy of Rockies residents we’d finally scored a ten.

Pitching up amid the sunshine glancing through the pines we were finally in our element. Natural splendour, fire pits, free-roaming elk and even wholesome things for children to do such as geocaching – a sort of treasure hunt with compasses – run every night on the site by the park rangers.

That night we ate steak and beans under the stars, and soaked up the big country, in no rush to hit the trail again any time soon.

A 21-day escorted tour of BC and the Canadian Rockies starts from £2,995pp including return flights, campgrounds, excursions and unit hire with Fraserway (fraserway.com).

The Moose Hotel and Suites (moosehotelandsuites.com) has double rooms from £125 per night.

Eurostar vs plane: KLM pitted against a train in a race to Amsterdam

Brits are ditching the pool for more adventurous holidays | The Sun