Follow
Home » Travel » How Much Are You Willing to Pay for a Few Extra Inches of Legroom?

How Much Are You Willing to Pay for a Few Extra Inches of Legroom?

Economy seats, even for long-haul flights, are getting tighter than ever. As more airlines try to squeeze more passengers onto their planes — and then squeeze more money out of those passengers by charging for things that used to be free (like checked baggage and onboard snacks) — passengers are increasingly looking for, and willing to pay for, a better travel experience.

To answer that demand, many airlines are turning to a new class of service: premium economy. Around 20 airlines, most of which are based abroad, currently offer dedicated premium economy cabins on long-haul routes. More carriers are set to introduce them in the coming years. On airlines from American to Qantas, premium economy offers travelers bigger seats and improved amenities for a price that is somewhere between regular economy and business class.

Here’s a guide on what to expect (and what not to) if you decide to upgrade on your next flight:

What exactly is premium economy and why am I am hearing so much about it now?

Premium economy was first introduced by Eva Air and Virgin Atlantic in 1992 as a new travel option for long-haul passengers who wanted a bit of extra comfort. The cabin was successful for both airlines and in the years since, more companies like Singapore Airlines and Air New Zealand have introduced their own versions.

U.S.-based carriers have been among the last to adopt the premium economy model, but American Airlines first started offering it in 2016 and Delta and United have both announced plans to roll out premium economy on their long-haul routes in the near future, with Delta saying the cabin will be on all of its international wide-body planes by 2021.

Premium economy tickets can cost two or three times as much as regular economy ones, and the difference in fare is mostly profit for the companies.

“It allows airlines to meet demand for a product and a price point somewhere between economy and business that historically they haven't been able to offer,” said Joseph DeNardi, a managing director for airlines, aerospace and defense at Stifel, a brokerage firm. “Based on what airlines have said, they think the returns they're getting on premium economy are very good, and that's why they're investing in the product." 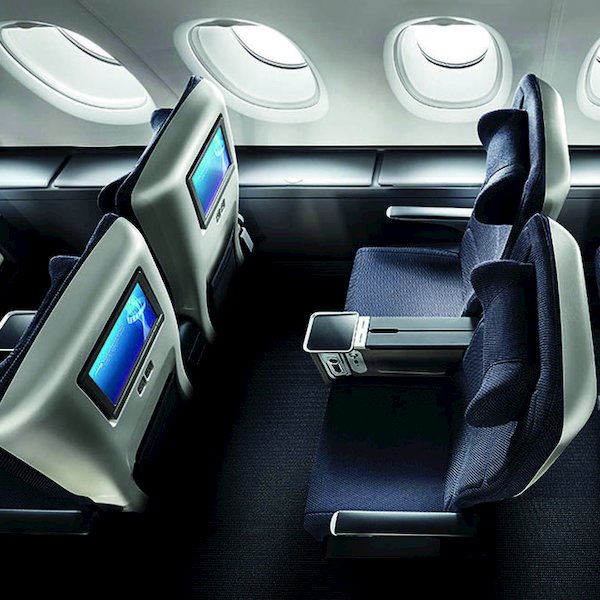 How much extra room will I actually get?

That depends. Configurations vary by airline and aircraft, but generally you can expect six to eight extra inches of pitch (space between your seat and the seat in front of you), and one to two extra inches of width. If you were flying from New York to London next month, you could book a premium economy ticket on American Airlines, British Airways and Virgin Atlantic. All three of those airlines have premium economy seats with 38 inches of pitch, about 7 more inches than you would get in economy. The seat width varies between 18.5 and 21 inches. (The range in economy is 17.1 to 18 inches.) American Airlines, Delta Air Lines and Virgin Atlantic also offer extra leg room seats in standard economy for a fee. (Those seats can have up to 36 inches of pitch, according to seatguru.com.)

Again, it depends. But on the airlines with dedicated premium economy cabins, it’s likely to be better than what you’ll get in coach. American Airlines, British Airways and Virgin Atlantic all have upgraded menus in their premium economy cabins, with options like duck confit potpie, slow braised lamb osso buco or ancient kamut grain risotto on American, and Taiwanese chicken with jasmine rice and beef stew with wild mushrooms on Virgin Atlantic. Virgin Atlantic also has a self-serve snack pantry called the “Wander Wall” for its premium economy passengers. Delta likewise has a special menu on routes where its “Premium Select” cabin is offered. For passengers on American, Delta or Virgin who upgrade to the extra leg room economy seats, meal service has the same options as regular economy.

Do I get any other extra perks?

Yes. At a time when many airlines are charging for checked bags, premium economy generally comes with a higher free baggage allowance (typically two bags), dedicated check-in counters and early boarding privileges. Some airlines also provide premium economy passengers with expedited security privileges. In the dedicated cabins there is usually a special amenity kit, too, with things like socks, an eye patch and a toothbrush. Some airlines also provide noise-canceling headphones to premium cabin customers.

What will a ‘premium’ seat cost me?

Here’s the breakdown for a sample New York-London itinerary, leaving Kennedy International Airport on Dec. 6 and returning from Heathrow Airport on Dec. 13, based on a 30-day advance purchase.

British Airways $440 round trip in basic economy, $1,220 in World Traveler Plus.

That seems pretty expensive. How much more if I decide to spring for a business class seat?

Haven't got a holiday hotspot for this summer? Here's what's available