Inside the Heathrow control tower: An air traffic controller reveals how the infamous stacking system works, that she’s a ‘bit of a nightmare’ passenger and why her workplace is VERY quiet

General hustle and bustle and people sitting in front of radar screens with cigarettes hanging out of their mouths – that’s what many people think it’s like inside an air traffic control tower.

But the reality is very different, explained Jules Tarr, who’s been an air traffic controller at London Heathrow for 27 years.

The 52-year-old took time out from guiding aircraft into land at one of the world’s busiest airports – it handles about 1,300 flights a day – to give MailOnline Travel the inside track on her job – and she revealed that many people are almost disappointed when they visit the Heathrow control tower. 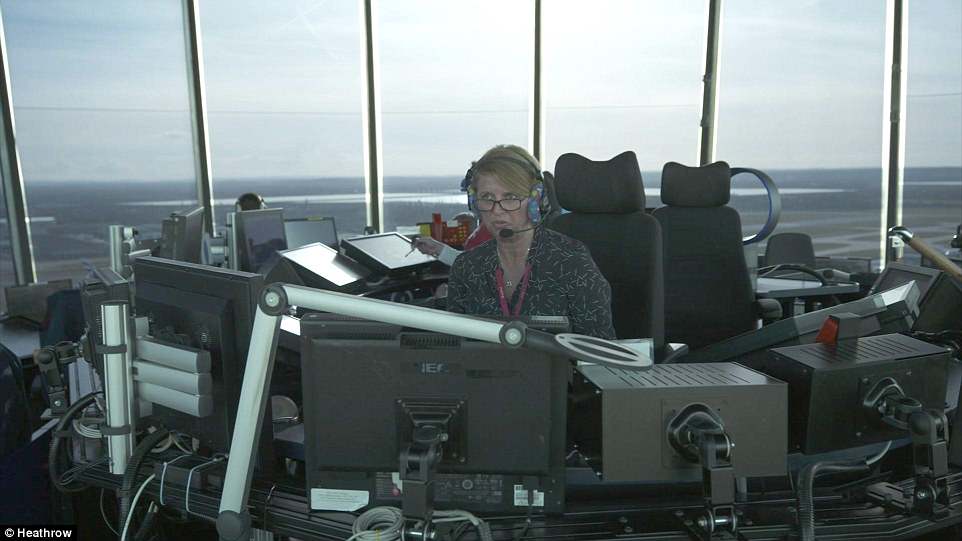 Jules Tarr, pictured, who’s been an air traffic controller at London Heathrow for 27 years, took time out from guiding aircraft in to land at one of the world’s busiest airports to give MailOnline Travel the inside track on her job 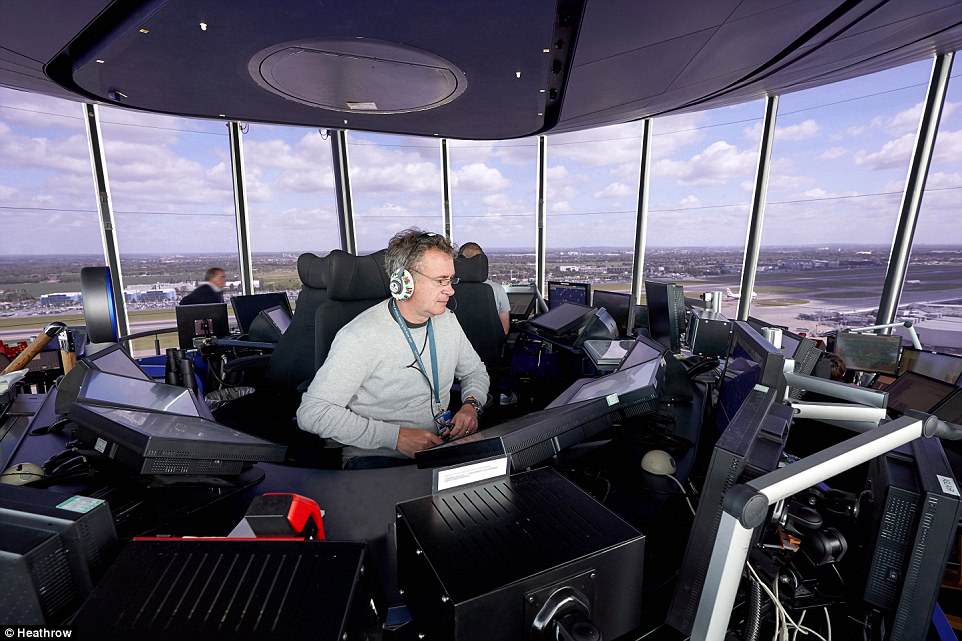 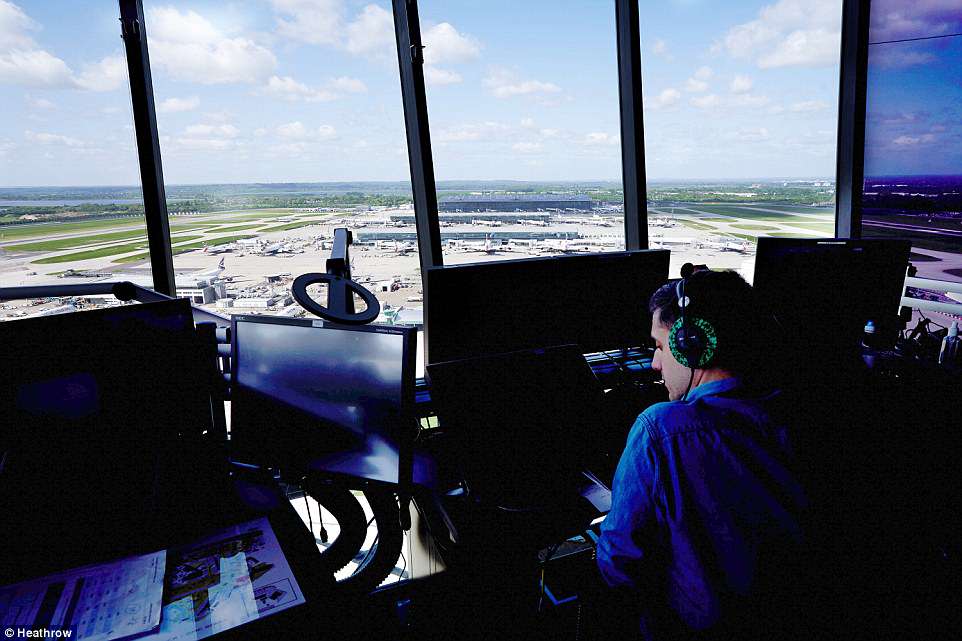 Lofty position: A view of Heathrow’s Terminal 5 from inside the Visual Control Room in the tower

She said: ‘People think that if they visit the control tower it’s going to be noisy and busy, and that it’ll be very stressful and full of hustle and bustle.

‘But it’s really about as opposite to that as it’s possible to get. When I take visitors to the control tower they normally comment on how calm it is. We work so closely as a team with a lovely sense of camaraderie, everybody is doing their part of the job.

‘But everybody is dependent on everybody doing their job correctly, so I don’t think it’s as frenetic as people expect – I think people are sometimes almost disappointed. They expect it to be full of people sitting there with cigarettes hanging out of their mouths.’ 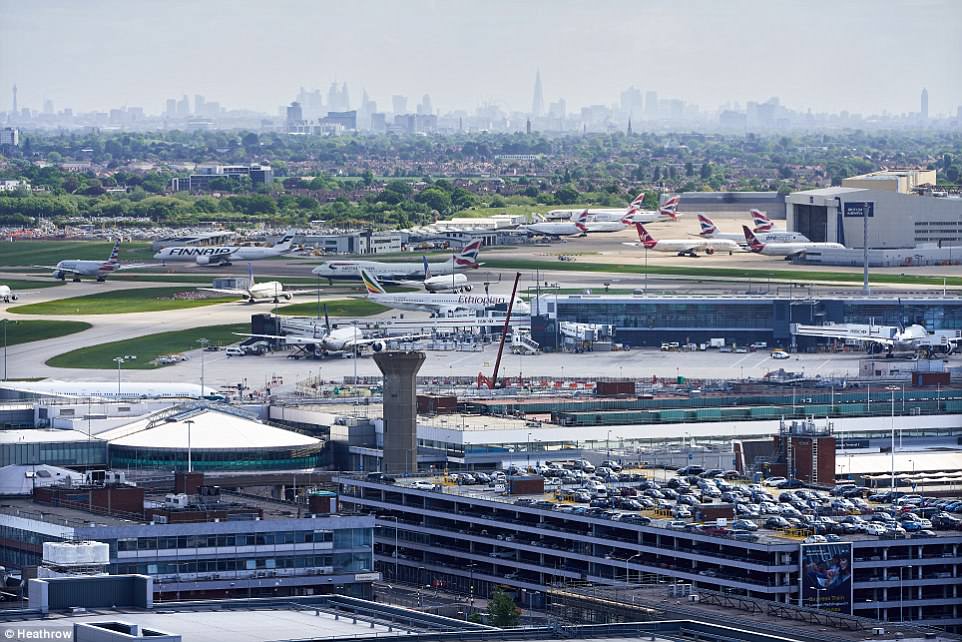 The London skyline as seen from the control tower, with the Shard clearly visible in the middle of the image 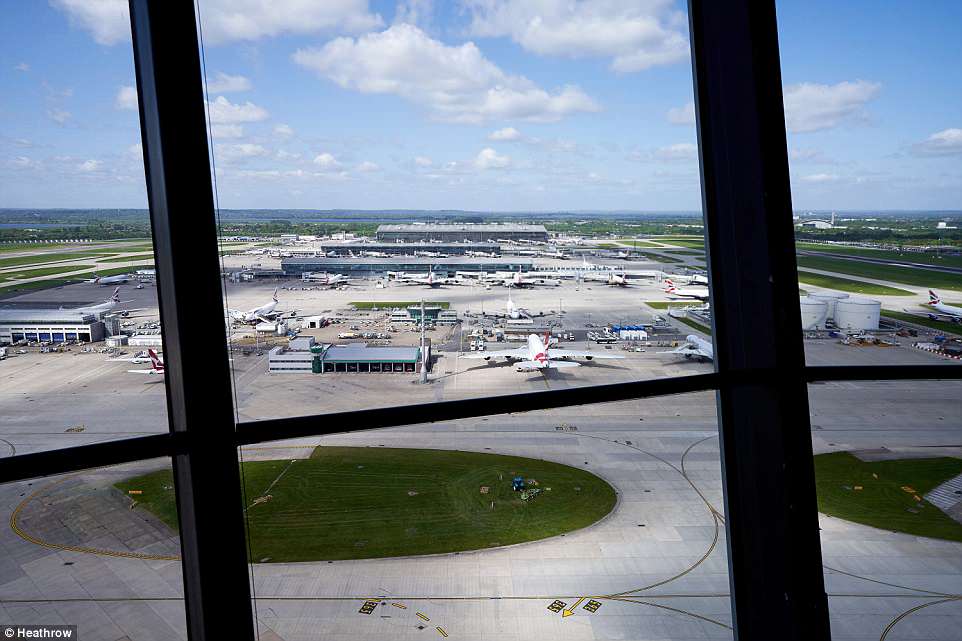 Jules explained that most people who visit the control tower are surprised at how quiet it is. This is another view of Terminal 5

It’s highly unlikely that anyone in the room ever feels worried about their responsibilities – guiding thousands of passengers a day safely into the air and onto the ground. Jules for one can’t recall a day on the job when she’s ever felt nervous.

She said: ‘We are so well trained. I don’t recall ever feeling nervous at work. It’s just not something that enters your head. You have airplanes to move and you have to move them as safely and expeditiously as you can. But you don’t think for one minute about anything that could go wrong. That’s not the mentality of someone who would become an air traffic controller.’

Jules, who works for Nats (formerly National Air Traffic Services), explained that there are three air traffic control teams in the tower, one for take-offs, one for arrivals and one that takes care of ground movements.

And they all operate at maximum sharpness, with breaks rigorously enforced.

Jules – who lives in the Cotswolds with husband, Richard, and Border Collie, Max – said: ‘So depending on what position you’re doing, you’ll do that position for an hour or an hour and a half. An hour and a half is the maximum that we can do and then we have to have a mandatory 30-minute break. So we’re quite heavily regulated from a safety aspect on how many hours we can do in a certain period.’ 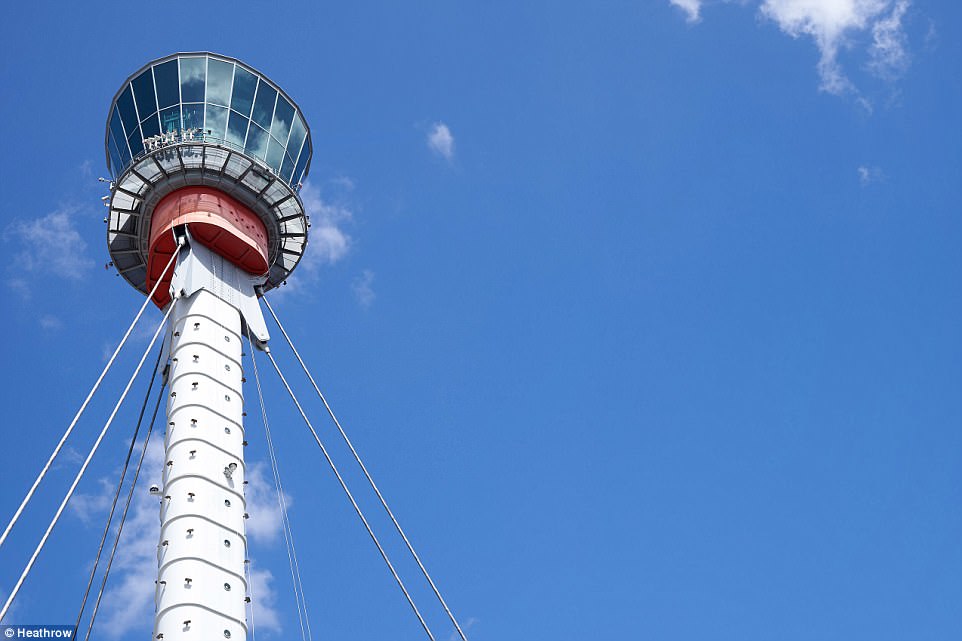 Jules explained that there are three air traffic control teams in the tower, pictured, one for take-offs, one for arrivals and one that takes care of ground movements 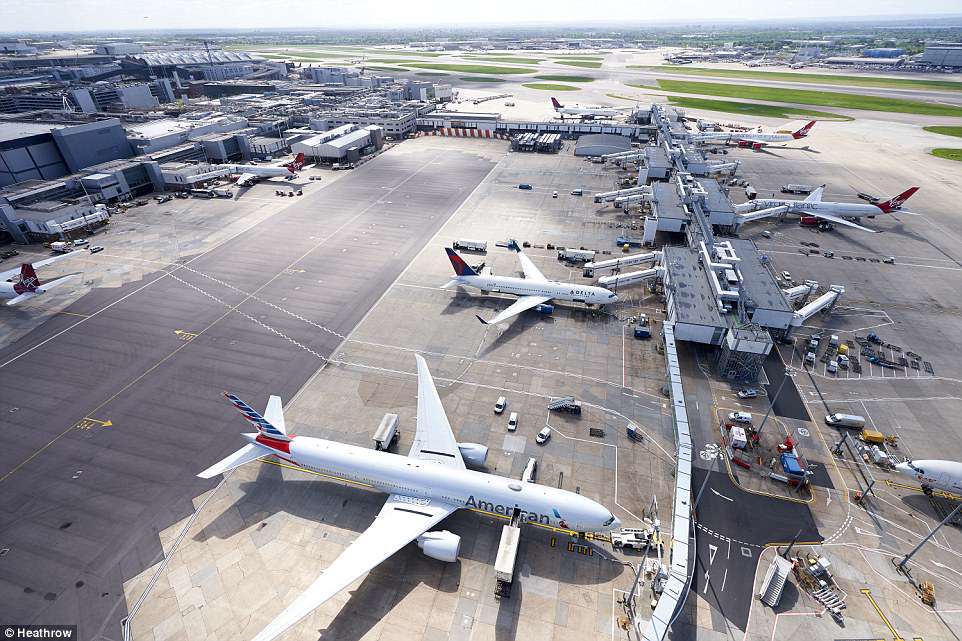 Looking down on aircraft gates almost directly below the tower, towards Terminal 3 and Terminal 4 in the background

The arrivals team set up the infamous stacking system that sees incoming aircraft looping around London in a giant queue.

‘It works on a first-come, first-served basis,’ explained Jules. ‘So we have four stacks, two to the north and two to the south. And it works like a corkscrew effect, so as an aircraft enters the stack at the top, you bring one off at the bottom, and they all descend a thousand feet – and another aircraft can join the top of the stack.

‘The aircraft will call us about 10 to 15 miles on final approach and as a Heathrow tower controller that is the first contact I will have with an inbound aircraft. And they’ll [the pilots] say “good afternoon” because we’re very civil to each other, “this is speedbird 182” or whatever, “on runway 27 left”. And I will say “good afternoon speedbird 182 continue approach”, or whichever runway he’s using and when it becomes that he is clear to land you pass him his landing clearance, he lands safely and you tell him to vacate the runway and then you transfer him to one of the ground controllers.’ 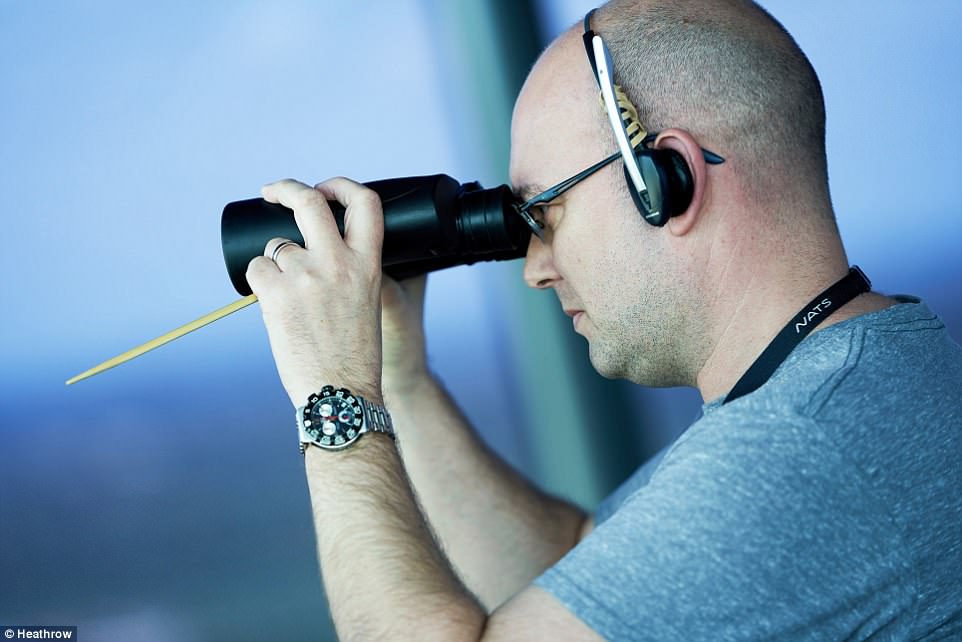 Despite the technology to support the controllers, it remains very much a visual job with a pair of binoculars always close at hand

General chit-chat, Jules revealed, does sometimes break out – but only in very limited bursts.

When she’s a passenger Jules likes to chat to cabin crew, too – to find out what really is causing a delay.

And she admits that she is a ‘bit of a nightmare’ in this regard.

Not least because she can double check reported air traffic control delays with her colleagues.

‘On one occasion I was on a flight and the captain came on and said “we’ve been delayed by 15 to 20 minutes by air traffic control”. And I thought, “That’s funny, it’s a beautiful sunny day, why have we got delays?” So I rang the control tower and they said “no, your flight’s not being delayed”. So then I called the cabin services director down and said “excuse me, the captain’s just told me it’s a 20-minute air traffic control delay and I don’t understand why particularly because I’ve spoken to the control tower…”

‘Anyway, they were waiting for a gluten-free meal to arrive for somebody, but the cabin services director said they didn’t like to admit that because that embarrasses the person waiting for the gluten-free meal and besides, “everybody understands air traffic control delays, so that’s what we say”. 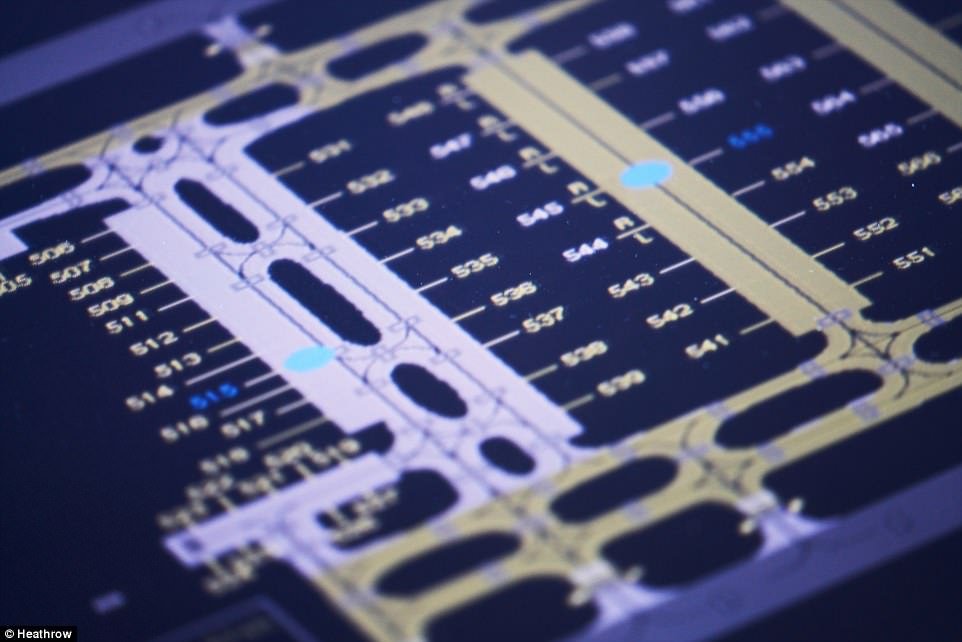 If you fancy become an air traffic controller, Jules said they are currently hiring.

And there’s no ‘type’ that succeeds in the job.

She said that she’s worked with everyone from used car salesmen to electricians.

What’s more, really bright sparks can earn over £100,000 as an air traffic controller.

But if you can only work with a cigarette hanging out of your mouth, it’s not the job for you.