A RYANAIR passenger slammed the airline after showing pictures of seats which were covered in food and grime – which were so dirty that passengers apparently refused to sit in them.

The photos were taken onboard a flight from Ibiza to Manchester last month and showed the filthy seating. 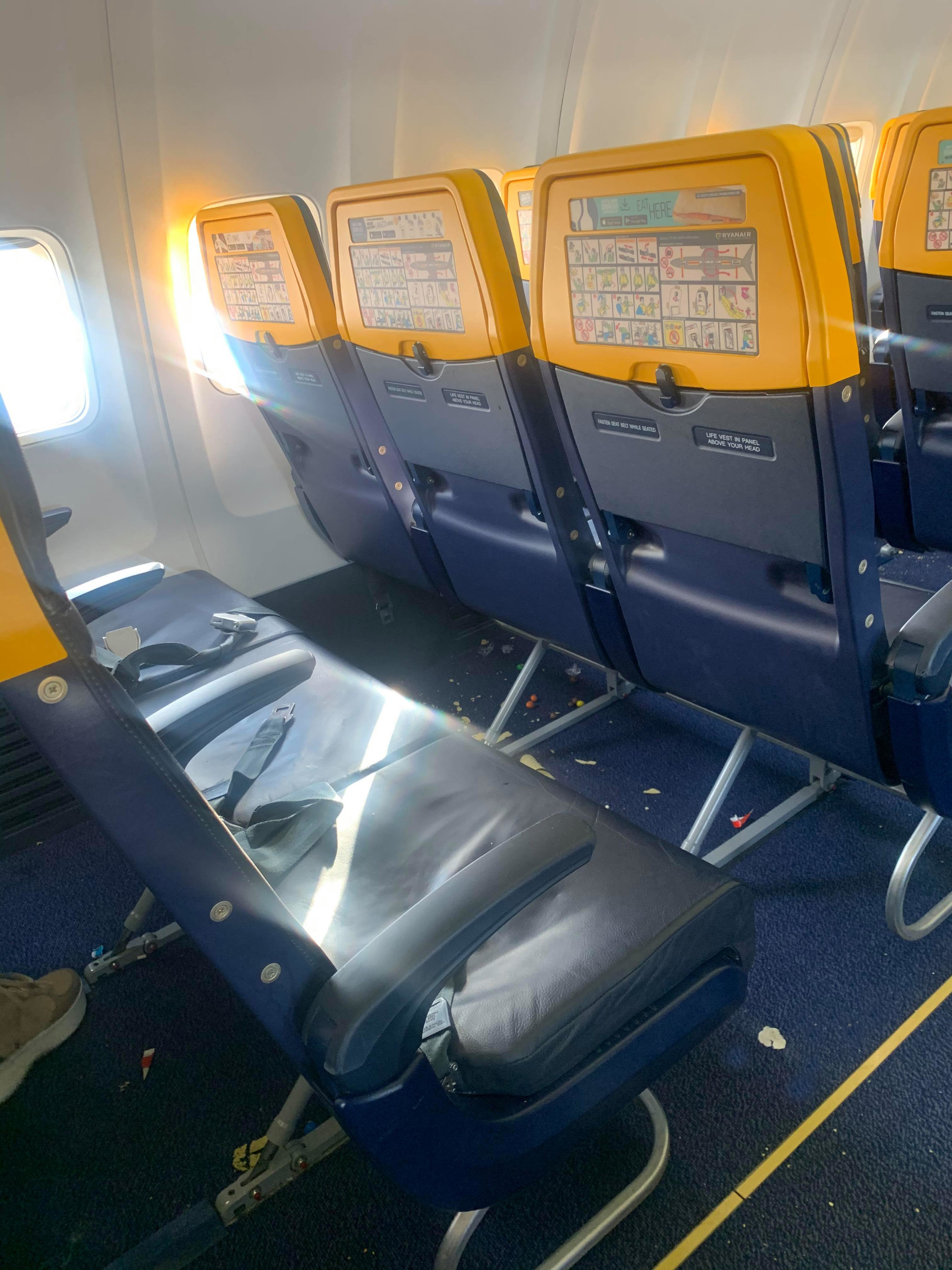 In one photo, rubbish is seen strewn across the foot well and crisps have been ground into the floor.

Another shows the empty seats covered in stains, with crumbs and other food surrounding them.

The concerning images were taken by a passenger named Tash, who does not want her surname used, on 17 June.

She took to a Ryanair complaints group on Saturday [18 Jul] to share the awful experience, saying: “So much for cleaning your planes for Covid.

“God I just f****** hate Ryanair – just boarded a flight back to Manchester from Ibiza and this is the cleanest part of the plane.”

Airlines have ramped up their cleaning processes due to coronavirus. The European Union Aviation Safety Agency state: "Aircraft operators should increase the in-flight cleaning and disinfection frequency for items/equipment frequently used by passengers or aircrew members, such as lavatories, door handles, latches, and interphones."

People refused to sit there, it was like this more or less all over the plane

"These frequently touched surfaces should be regularly cleaned and disinfected, as well as when they become visibly soiled.

"Aircraft operators should adjust the inflight cleaning and disinfection frequency based on an assessment of the target population and the specificities of their operations."

Her post has sickened many other group members. One man said: “Atrocious! I just remember they were always bad at cleaning.

“I used to joke that's why you print your boarding pass to sweep the crisps. Now it's less funny.”

Another added: “Ryanair disgust me, they’ve always disgusted me.”

And one man said he had a similar experience, writing: “Just got off the Liverpool – Malta flights.

“Opened the tray table to put some snacks on – it was filthy with grime and dust. No way has been cleaned.” 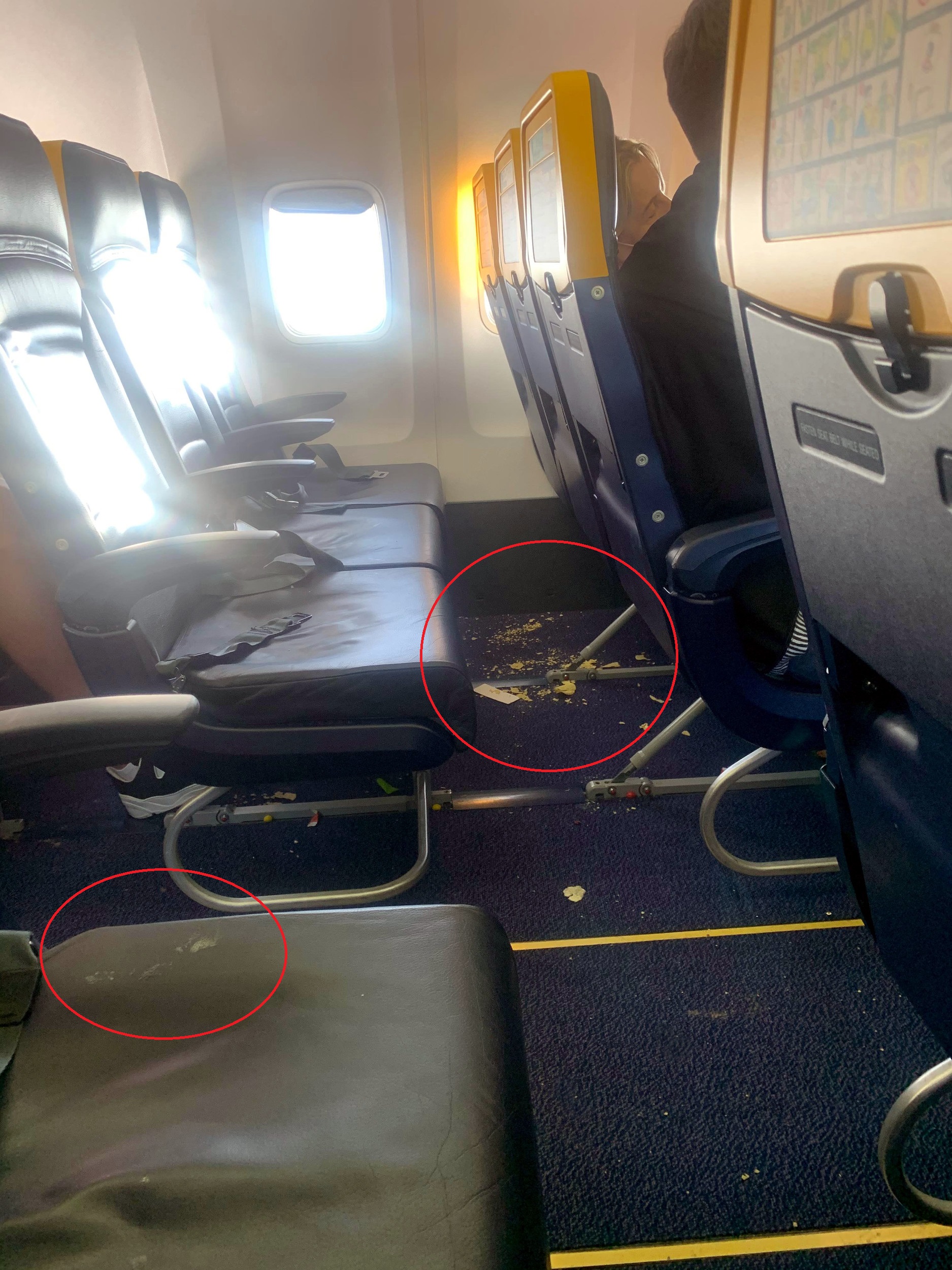 Tash also added that staff failed to properly check her Covid form, she said: “I missed the back page and they didn’t even check it and accepted it.”

Speaking today, Tash said of the photos: “People refused to sit there, it was like this more or less all over the plane.

“It was dirty and unclean. It’s understandably it wouldn’t be the cleanest, however you can tell they haven’t attempted to clear it at all.

“Staff were threatening lads on the plane that we won’t set off because their mask wasn’t tucked behind their ears, but they were wearing it – it was pretty much a power trip.

“We could move where we wanted on the plane with no spaces between people.

“They’re claiming to be ever so professional, when they’re refusing refunds and don’t abide by any social distancing regulations.”

A Ryanair spokesperson told Sun Online Travel: "Ryanair has a new set of health measures in place to prevent any spread of Covid-19. We are regularly assessing the effectiveness of these measures and we continue to work with our people to ensure our guidelines are followed”.

"In line with industry standards, our cabin crew carry out a cabin tidy and toilet check at the end of every flight, and at the end of each day all Ryanair aircraft are thoroughly cleaned with hospital grade disinfectant, which is effective for over 24 hours.

"We are following up with our crew in relation to this flight.”

COVERED, in, plane, Ryanair, seats
You may also like: